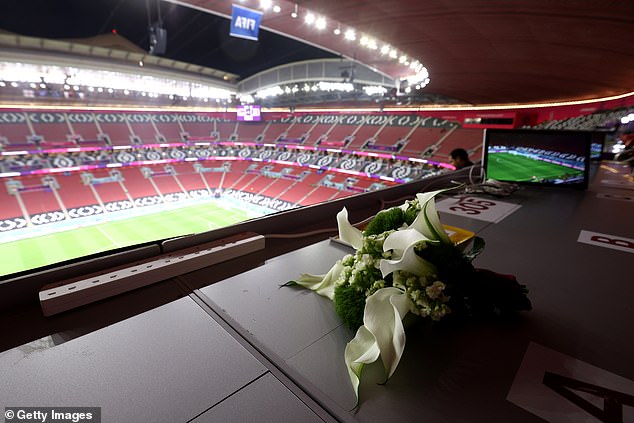 
Flowers are placed in Grant Wahl’s press box seat at the England vs France World Cup game, 24 hours after his tragic death while reporting on the Argentina-Holland quarterfinal

By Patrick Djordjevic For Dailymail.Com

Grant Wahl’s memory has been honored by FIFA ahead of the World Cup quarter-final clash between England and France.

The 48-year-old, who passed away in Qatar Friday night, was scheduled to attend the game before tragedy struck while he was covering Argentina’s win over Holland in one of the other quarter-finals.

White flowers were placed on what was to be the famed journalist’s press box seat at the Al Bayt Stadium.

Wahl, who covered American and world soccer on his Substack, CBS Sports, NBC News and previously worked for Sports Illustrated, was ‘healthy’ before he collapsed during a game Friday, according to brother Eric in an Instagram video he posted.

His agent, Tim Scanlan, told the New York Times that Wahl had gone into acute distress in the final minutes of a quarterfinal match, which he was covering from the press tribune.

US media seated near him said Wahl fell back in his seat in the media tribune at Lusail Iconic Stadium during extra time and reporters adjacent to him called for assistance. Emergency services workers responded very quickly, the reporters said, and his colleagues were later told that he had died.

Rafael Cores, a journalist for Univision who was sitting next to Wahl at the match, wrote: ‘He was working on his story on his laptop, it was about 4 minutes before the end of the extra time. He was laughing at a joke we saw on Twitter only minutes earlier. I can’t believe it. My deepest condolences to Grant Wahl’s family.’

His brother Eric, who is gay, said through tears that he believes his brother – who had been detained before the United States’ tournament opener against Wales for wearing a rainbow flag shirt – may have been killed.

Wahl’s brother said: ‘I am the reason he wore the rainbow shirt to the world cup. I do not believe my brother just died, I believe he was killed.’

The Princeton graduate had spoken about feeling under the weather in an episode of his podcast – Futbol with Grant Wahl – recorded Thursday.

He said on the podcast: ‘My body finally broke down on me. Three weeks of little sleep, high stress and lots of work can do that to you. What had been a cold over the last 10 days turned into something more severe on the night of the USA-Netherlands game, and I could feel my upper chest take on a new level of pressure and discomfort.’

Wahl wrote that he tested negative for COVID-19 and sought treatment for his symptoms.

‘I went into the medical clinic at the main media center today, and they said I probably have bronchitis. They gave me a course of antibiotics and some heavy-duty cough syrup, and I’m already feeling a bit better just a few hours later. But still: No bueno,’ he wrote.

Wahl was a respected sports journalist, noted for his dedication to elevating soccer in the US