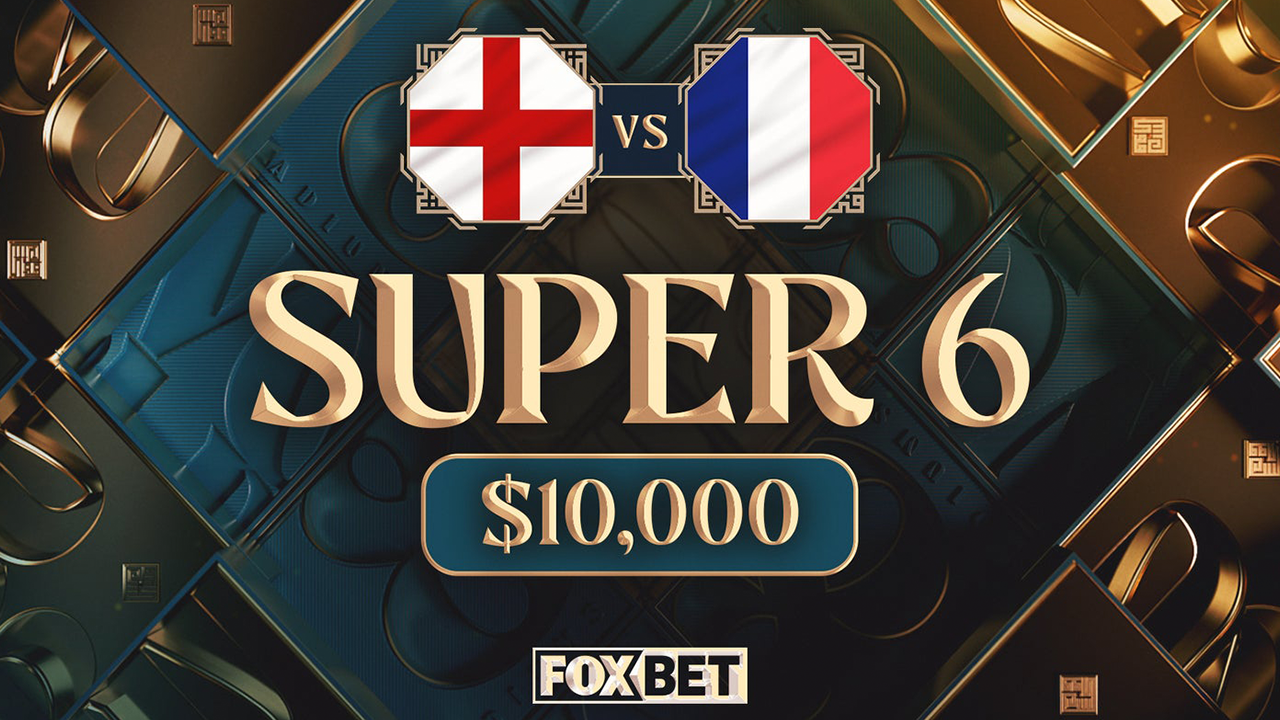 FOX Bet Super 6 is a free-to-play contest where you pick six different outcomes from the marquee matchup between England and France for a chance to win $10,000.

To be the best, you have to beat the best. That’s exactly what England will attempt to do Saturday when it faces reigning World Cup champion France in the quarterfinals.

And the Three Lions probably like their chances against Les Bleus. After all, England has defeated France 17 times in the past 31 matches between the two.

Because of the world-renowned talent on both sides of the ball, the England-France match is one that everyone will watch. France has phenom Kylian Mbappé — the current favorite to win the Golden Boot and Golden Ball. On the other side, England’s roster boasts Harry Kane, a record-breaking striker and captain of the team. Kane also won the Golden Boot in 2018.

The competition will be stiff, and the stakes for each country will be high as both battle to make it to the next round.

Why not get in on this action?

That’s where FOX Bet Super 6 has you covered!

FOX Bet Super 6 is a free-to-play contest where you pick six different outcomes from the marquee matchup between England and France for a chance to win $10,000. Just download the FOX Bet Super 6 app on your phone or mobile device, make your picks and submit your selections before the match kicks off.

It’s easy, it’s so much fun, and most importantly, it’s FREE!

This match gets underway on FOX and the FOX Sports app at 2 p.m. ET Saturday.

If you answer all six questions and correctly predict all six outcomes of this soccer match, you could be taking your ball all the way to the bank to cash in your 10 grand.

Before you open up the England-France contest and get into this FOX Bet Super 6 challenge, here’s a preview of the questions that you’ll find in the app AND a prediction at the end!

The French superstar is as good as advertised and maybe even better. Mbappé has dazzled Qatar so far as the best player in the tournament, and he won’t be letting up now that Les Bleus are facing the hungry Three Lions.

England will give it a go without one of its most important pieces in Raheem Sterling. However, England has a respectable enough bench, so the squad should keep the match competitive for a while.

However, Kylian Mbappé’s intangibles, speed and sheer athleticism will lead Les Bleus to a victory over England in Qatar.

Now, it’s your turn to get ready to win $10,000. You don’t want to leave all that cash on the table when it could be in your pocket, now do you?

And remember, you can watch all the action of the England and France match right here on FOX this Saturday at 2 p.m. ET/11 a.m. PT.