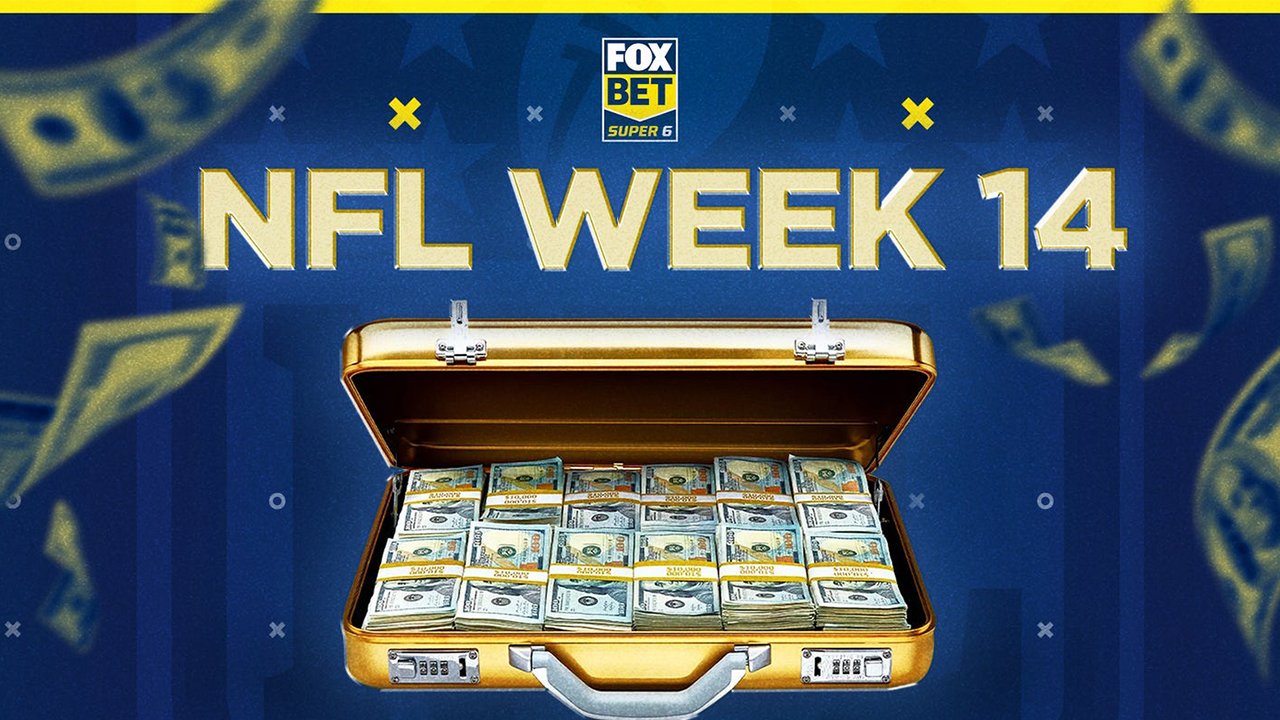 
FOX Bet Super 6 is a free-to-play contest where you pick the winners of all six marquee games with their margins of victory for a chance to win $100,000 in the NFL Sunday Challenge.

It’s that time of year, folks.

You’ve swiped your card an absurd amount of times for seasonal Starbucks drinks. Your calendar is filled with holiday parties, and you need to buy a Secret Santa present for every single one of them. And you’ve said yes to buying something from every “sale” that planted an ad in your inbox.

We know a little extra cash goes a long way around this time of year. That’s why Terry Bradshaw is giving away $100K in the FOX Bet Super 6 NFL Sunday Challenge for Week 14.

FOX Bet Super 6 is a free-to-play contest where you pick the winners of all six marquee games with their margins of victory for a chance to win $100,000 in our NFL Sunday Challenge. Just download the FOX Bet Super 6 app on your phone or mobile device, make your picks and submit your selections before Sunday’s games kick off.

From America’s Team to the Steel Curtain, we’ve got six games that could end up being the boost your bank account needs.

And if you need extra motivation, remember that it’s FREE to play, it’s fun, it’s easy and people really do win.

But you have to get in the game to get the green. So before you make your predictions for Sunday’s marquee matchups, read all about our picks below.

The two NFL teams from Texas face off in a matchup that will easily go to the Cowboys.

Houston is 1-10-1 on the season. The Texans’ lone victory came against the Jaguars — a squad with only four wins this year.

The Cowboys could Texas two-step into this game, eyes covered with bandanas, hands tied with lassos and still get the W. And that’s because Dallas does so much well. The Boys rank third in the league in points scored per game, third in scoring defense and seventh in rushing offense.

From Dak and Tony Pollard on offense to sack monster Micah Parsons on defense, is there any reason for Houston to even get off the plane?

Prediction:
Cowboys by 8 to 10 points

In Deshaun Watson’s first NFL game in 700 days, Cleveland’s QB1 went 12-of-22 for 131 yards, no touchdowns and one interception in the Browns 27-14 win over the Texans. It was a lackluster offensive showing for Deshaun that still ended with a Cleveland victory.

But Brown won’t be so lucky against the Bengals in Week 14.

Cincinnati enters this contest after a thrilling 27-24 victory over the red-hot Kansas City Chiefs.

At FOX Bet, the Bengals — the home team — are currently favored by 6 points. And Joe “McCaulay Culkin” Burrow is 6-4 against the spread (ATS) and 7-3 straight up (SU) as a starter in his career when he’s a home favorite.

Also, Cincinnati is on a four-game winning streak, racking up an average of 26 points per game as the NFL’s seventh-best scoring offense and is one of the league’s least-penalized squads. In other words, the Bengals don’t beat themselves.

Prediction:
Bengals by 11 to 13 points

Kirk Cousins & Co. are 10-2 SU this season and are a perfect 9-0 in one-score games. And despite the fact FOX Bet has the Lions as 2.5-point favorites, the Vikings will keep the good thing they’ve got going in Week 14.

However, don’t completely count out Detroit. At least when it comes to the spread.

This season, Big D is 8-4 ATS. The squad absolutely pummeled the Jaguars in Week 13, 40-14. Just don’t expect another straight-up win for the Lions this week.

Vikings wide receiver Justin Jefferson has been one of the most explosive offensive weapons in the NFL this season. JJ’s 88 catches rank third in the NFL, and his 1,277 receiving yards come in second. Detroit’s last-ranked defense cannot stop that kind of firepower from a Minnesota team that proves every week that it knows how to win.

Prediction:
Vikings by 1 to 2 points

We really wanted to make this our upset pick of the week and go G-Men over the Birds, but we can’t.

New York has lost two of its last three and tied with the Commanders for a score of 20 in Week 13. The Giants scoring offense and their total defense both rank in the bottom third of the league. Philly’s offense is on the opposite end of the spectrum. The Eagles offense ranks second in the league — behind only Kansas City — in scoring. And Philly has a top–10 defense when it comes to opponents’ rushing attempts per game.

This means that NY’s Saquon Barkley, one of the team’s biggest impact players, will have his work cut out for him against this unit.

Also, the Eagles have been solid against the spread this season, as they’ve gone 7-5 ATS. Philadelphia is currently a 6.5-point favorite in this matchup. We like the Eagles to win and cover.

Prediction:
Eagles by 8 to 10 points

From colossal fourth-quarter collapses to Lamar Jackson’s knee injury that he suffered in the first quarter last week against the Broncos, what a year it has been for the Ravens. But at 8-4 and as division leaders, they’re firmly positioned for a playoff run. At least, that’s the case currently.

Coach John Harbaugh admitted that Lamar’s availability is week-to-week, so with that information, Baltimore’s chances at winning games each week will also be in jeopardy. The squad went 1-4 last season when QB1 didn’t start. If No. 8 doesn’t suit up this weekend, we like the Steelers at home.

And FOX Bet gives the edge to Pittsburgh, too. Oddsmakers currently have Black and Yellow listed as 2.5-point favorites.

While the jury is still deliberating on how successful Steelers rookie QB Kenny Pickett will be as a starter in the league, he has helped lead the Steelers to a 3-1 record since the bye.

Prediction:
Steelers by 4 to 5 points

Tom Terrific did it again on Monday Night Football when all was seemingly lost. He rallied his squad to a huge fourth-quarter comeback and defeated the lowly Saints 17-16. That game marked Brady’s 44th career win when trailing in the fourth.

However, don’t get it twisted; the Bucs still stink. But will it work in their favor that they’re facing a Niners team that’s starting — checks notes — Brock Purdy?

The 2022 NFL Draft’s Mr. Irrelevant, Purdy is playing with house money. So it was nothing for him to go for 276 yards and two TDs in last week’s 33-17 win over Miami. But San Fran is so well-rounded that the team’s success doesn’t rely solely on QB play.

Prediction:
Niners by 4 to 5 points

It’s your turn to jump in and win some money!

After you download the app and submit your selections for the upcoming contest, be sure to share your picks with us by tagging @FOXSuper6 and @EricaReneeD and using the #EricaSuper6 hashtag across all social media platforms.