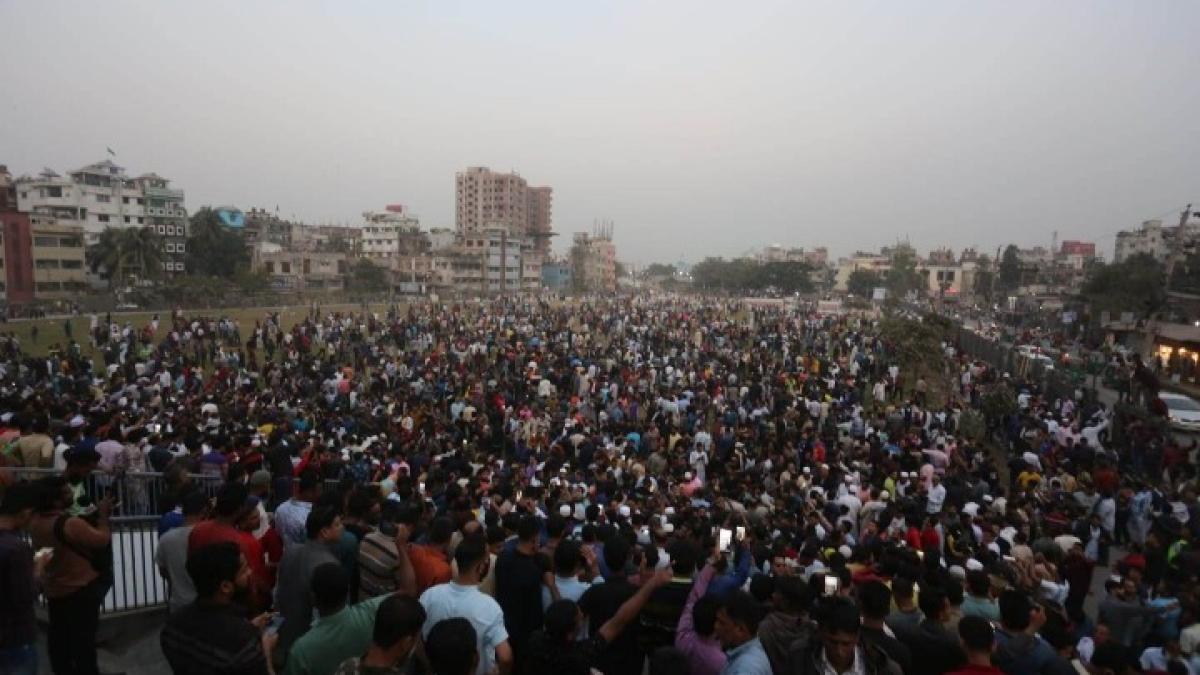 By Sahidul Hasan Khokon: The Bangladesh Nationalist Party (BNP), which has been out of power for 14 years, is holding a massive rally at Golapbagh ground today, and thousands of BNP workers and supporters have gathered in a show of strength ahead of the general elections.

According to law enforcement sources, a tight security zone has been established across the capital, Dhaka, to maintain law and order. Police say they have created several layers of security around the rally site.

Earlier this week, a clash broke out between the police and BNP workers in Naya Paltan area, centred around the rally. A man identified as Mokbul Hossain lost his life in the clash.

Later, a case was filed against over 1,000 BNP workers, and several senior leaders, including the party’s general secretary, Mirza Fakhrul Islam Alamgir, were arrested. A Dhaka court has sent them to jail in a case of sabotage.

Around 30,000 law enforcement officers, including members of the Armed Police Battalion, Rapid Action Battalion (RAB), Ansar, Dhaka Metropolitan Police, and intelligence personnel from other organisations are on duty.

Police and detective sources said that they have been ordered to put an end to all acts of violence and damage. RAB is also policing the city using a chopper.

“The conditions that were given to the BNP in Sohrawardy Udyan will remain the same. The law enforcement security table will also remain the same. There will be many policemen in uniform and plainclothes working there. Earlier, the same security measures that we had created around Suhrawardy Udyan have been implemented in Golapbagh field as well. We have an adequate police force around the grounds and surrounding areas around the rally,” said Dhaka Metropolitan Intelligence Police (DB) chief Haroon ur Rashid.

When asked how many police officers are on the ground, Haroon ur Rashid said, “Rather than evaluating the numbers, every member of the law enforcement force is on the ground to provide enough security and guarantee that the rally finishes graciously.”

Meanwhile, Farid Uddin, the captain of RAB 10, said, “The Dhaka Metropolitan Police as well as RAB have taken the necessary precautions to hold a peaceful rally. We have strengthened our security measures considering various field-based hazards.”

“We also want the BNP to finish their rally safely. There are various houses under construction, many buildings around the grounds, different zigzag roads, and several parts of the field have brick pits, which are very dangerous. However, I have planned security measures so that the BNP rally ends without any untoward incidents,” he added.

4,000 soldiers of Bangladesh Ansar, a paramilitary group, will also be present at the rally site.

“Around 4,000 Ansar members will be working to secure the area. Prior to this, Ansar members and police officers worked together to maintain law and order. This time, numerous law enforcement organisations are engaged to maintain peace and order,” said Ansar’s public relations representative, Zahidul Islam.

“Don’t have any doubts about December 10. There will definitely be a rally in Dhaka on that day,” BNP Secretary General Mirza Fakhrul Islam Alamgir said on Tuesday in front of local leaders and foreign ambassadors in a hotel in Gulshan. He was arrested two days later.

While Mirza Fakhrul was being held at the DB office in the capital from Friday morning to noon, the BNP obtained permission for Saturday’s rally. His detention the night before the rally has also been the subject of numerous calculations and nerve-racking analyses.

Some members of the BNP Standing Committee believe that Mirza Fakhrul was arrested to demoralise party leaders and disrupt the rally’s planned, coordinated activities.

Most members of the BNP’s standing committee believe Mirza Fakhrul is the party’s most active secretary general.

Fakhrul’s political colleague, barrister Zamiruddin Sarkar, a member of the party’s standing committee, stated, “The democratic struggle has become more active with the arrest of Mirza Fakhrul. People of the country are united today. He is the best secretary general of the BNP.”

“I got the news through family and lawyers, he [Fakhrul] had breakfast in DB in the morning. Then he went to the court after having a light lunch. From there, he was taken to prison along with Mirza Abbas. He gave great courage to those who were present when he left. He also encouraged them very bravely. He wanted to know about many people,” Shayrul Kabir Khan said on Friday night.

According to BNP sources, a party within the party and within the government collaborated to calculate Mirza Fakhrul’s arrest. Some have expressed concern that a jealous faction within the party may have played a role in his arrest.

An influential BNP functionary said Mirza Fakhrul’s active and effective leadership of the party as secretary general will be evident during his time in prison.

Some leaders of political parties interested in joining the BNP believe Mirza Fakhrul was at the forefront of the BNP’s large liberal democratic, progressive section prior to the 12th National Assembly elections. His arrest will help the party’s right wing. At the same time, the religious sector stands to benefit.

The Awami League, which has been ruling Bangladesh since 2009, has asked all its party leaders and workers in Dhaka to be on alert. Similar instructions were issued by affiliated organisations, including the Jubo League, Chhatra League, and Swechasebak League. Party workers outside the city of Dhaka have also been asked to remain alert.

Many workers of the Awani League were stationed in front of the central party office on Bangabandhu Avenue, and they are expected to remain there today as well. Apart from this, Awami League leaders and activists were seen in areas including Dhaka’s entrance, Zero Point, Gulistan, Syedabad, Jatrabari, Kalyanpur, Hatirpool, Jigatla, Russell Square, Dhanmondi, Newmarket, Azimpur, Sadarghat, Sutrapur, Shanir Akhra, and Dholaipar.

Abu Ahmed Mannafi, president of Awami League Dhaka Metropolitan South unit, said, “From unit to ward, police station to metropolis, Awami League leaders and activists at all levels and affiliated organisations are on alert. The directive came from Friday’s rally and the joint meeting that preceded it. If BNP wants to create anarchy here, it will be dealt with on the streets.”

“Our leaders and activists will keep a watchful guard on the streets,” said party general secretary Obaidul Quader at a party meeting on Friday, reiterating that violence by the BNP will be dealt with on the streets.

‘TODAY’S RALLY WILL SEND A MESSAGE’

BNP Secretary General Mirza Fakhrul Islam Alamgir was the chief guest at nine divisional gatherings, but he was arrested on Thursday night and will not be present at the Dhaka divisional mass gathering today. One of the members of the party’s standing committee, Dr Khandkar Mosharraf Hossain, will speak as the chief guest now.

“Today’s mass gatherings are very important to move Bangladesh on the path of democracy,” BNP Standing Committee member Iqbal Hasan Mahmud said, adding, “We always advocate non-confrontational, democratic expression of opinion. Nine departmental mass meetings were peacefully organised. However, the government attempted to halt the rally in Dhaka. Mirza Fakhrul, our Secretary General, and Mirza Abbas, the leader of the Standing Committee, have both been arrested.”

Mahmud Tuku further said that today’s rally will send a message to the nation that their lost rights will be restored.

“A new programme will be launched. This government has completely destroyed the state system. We will present our demands to the entire country,” Mahmud Tuku said.

Several members of the BNP Standing Committee have stated that the BNP will issue a 10-point demand, including the resignation of the ruling government and the release of Khaleda Zia from Saturday’s rally. Standing committee member Khandkar Mosharraf Hossain will present these demands at the rally. In addition, he will announce the new programme in the coming days.

The 10-point demand has already been discussed with the BNP and other opposition parties, according to party leaders at various levels and opposition political parties. These ten demands were reached after discussions with opposition parties. Among them, the most important ones are as follows:

— Constitutionalisation of a caretaker government system

— Repeal of the Digital Security Act

— Reduction in the price of electricity, fuel, and other daily commodities

— Formation of a commission to prevent money laundering

— Prosecution of victims of disappearances and murders, communal crimes

According to some BNP leaders, nearly all members of the standing committee will attend the rally on Saturday.

Since it is a Dhaka divisional assembly, Mirza Fakhrul and Mirza Abbas will be replaced by two members if no one else speaks. Zamiruddin Sarkar, Nazrul Islam Khan, and Amir Khosru Mahmud Chowdhury are notables in this regard, they said.

Although the decision to outline the state reforms had already been finalised, the BNP High Command has withdrawn from this decision, said party leaders.

Tariq Rahman, the acting chairman of BNP, will make this announcement. Among these reforms are:

— Restoring the electoral system of government

— Appointing the Ombudsman in accordance with the Constitution

Furthermore, on May 10, 2017, BNP Chairperson Khaleda Zia announced that the party would focus on “Vision 2030,” which would include balancing the powers of the President and Prime Minister, establishing an inclusive, non-discriminatory “Rainbow Nation,” and establishing a National Reconciliation Commission.

The outline also included establishing an upper house in the National Parliament, amending the constitution and reintroducing the referendum system, compiling a list of freedom fighters, ensuring accessible health care, prohibiting the use of party symbols in local government elections, prohibiting domestic and foreign terrorism in Bangladesh, and reducing reliance on electricity imports.

The BNP regards this outline as an election manifesto.

“The outline will be announced later by the party,” said a member of the standing committee.