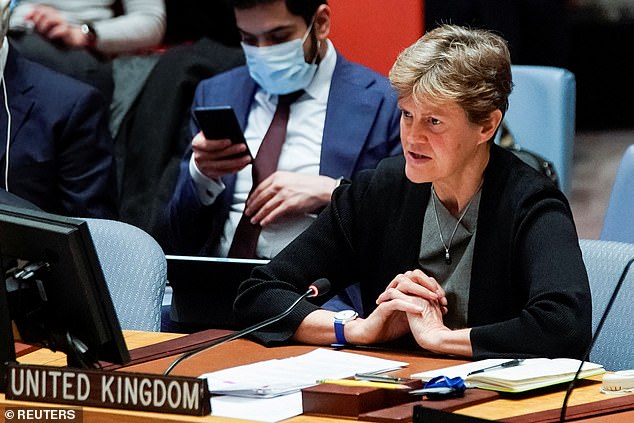 By James Franey Europe Correspondent For The Daily Mail

Barbara Woodward told the UN Security Council in New York that Moscow was trying to source weapons to refill its depleted arms stocks over the winter.

Its forces have used hundreds of drones and missiles sourced from Iran to ‘kill civilians and illegally target civilian infrastructure’ in Ukraine, she said.

‘Russia is now attempting to obtain more weapons, including hundreds of ballistic missiles,’ she said.

Ukraine’s allies have accused Vladimir Putin’s forces of committing war crimes, and Britain and France have even suggested that the Russian president should be put in the dock

‘In return, Russia is offering Iran an unprecedented level of military and technical support.

‘We’re concerned that Russia intends to provide Iran with more advanced military components, which will allow Iran to strengthen their weapons capability.’

The Ministry of Defence said yesterday that Russia had probably received a resupply of Iranian Shahed-131 and 136 drones, with reports over the past three weeks of attacks involving these devices.

The United States also expressed alarm over a ‘large-scale military partnership’ between Russia and Iran, describing it as ‘harmful’ to Ukraine, to Iran’s neighbours and to the wider world.

Putin hints at a peace deal

Vladimir Putin last night opened the door to a peace deal with Ukraine, admitting one may be needed to end the war.

But the Russian president said he was wary because a previous agreement – the Minsk accords – had ‘favoured’ Kyiv.

‘It turned out that they wanted to pump Ukraine with weapons,’ he claimed. ‘Eventually we will have to negotiate an agreement. But there is an issue of trust.’

It is feared the Kremlin would use a cessation of hostilities as a chance to restock and resupply it battered armed forces.

Washington said yesterday that it was sending another £231million in military aid to boost Ukraine’s air defences against drones.

John Kirby, White House national security spokesman, expressed concern about the ‘deepening and burgeoning defence partnership’ between Iran and Russia and said the US would try to disrupt it.

Miss Woodward said the UK was ‘almost certain that Russia was seeking to source weaponry from North Korea [and] other heavily sanctioned states, as their overstocks palpably dwindle’.

Jens Stoltenberg, Nato’s general secretary, warned yesterday that the conflict could spin out of control into a war between Russia and the Western alliance.

‘If things go wrong, they can go horribly wrong,’ he added. ‘It is a terrible war in Ukraine.

‘It is also a war that can become a fully-fledged war that spreads into a major war between Nato and Russia. We are working every day to avoid that.’

Ukraine’s allies have accused Vladimir Putin’s forces of committing war crimes, and Britain and France have even suggested that the Russian president should be put in the dock.

On Thursday a senior US official went as far as to liken the brutal acts committed by some of Moscow’s units to those seen in Syria.

‘Russia’s forces have deliberately booby-trapped objects in people’s homes, including children’s toys, and even the bodies of people killed by the invasion,’ said Michael Tirre, the State Department’s European affairs manager.

He said such tactics were ‘reminiscent of IS tactics in Iraq and Syria, where IS terrorists sought to inflict as many civilian casualties as possible and make people afraid to return home’.

The US yesterday announced sanctions against three Russian-based entities active in ‘the acquisition and use of Iranian drones’.

Tehran admitted last month that it had sent drones to Russia, but insisted they were supplied before the invasion of Ukraine.

‘What The Actual F**k?’: Matt Damon Loses It Over Kimmel’s 20th Anniversary Snub