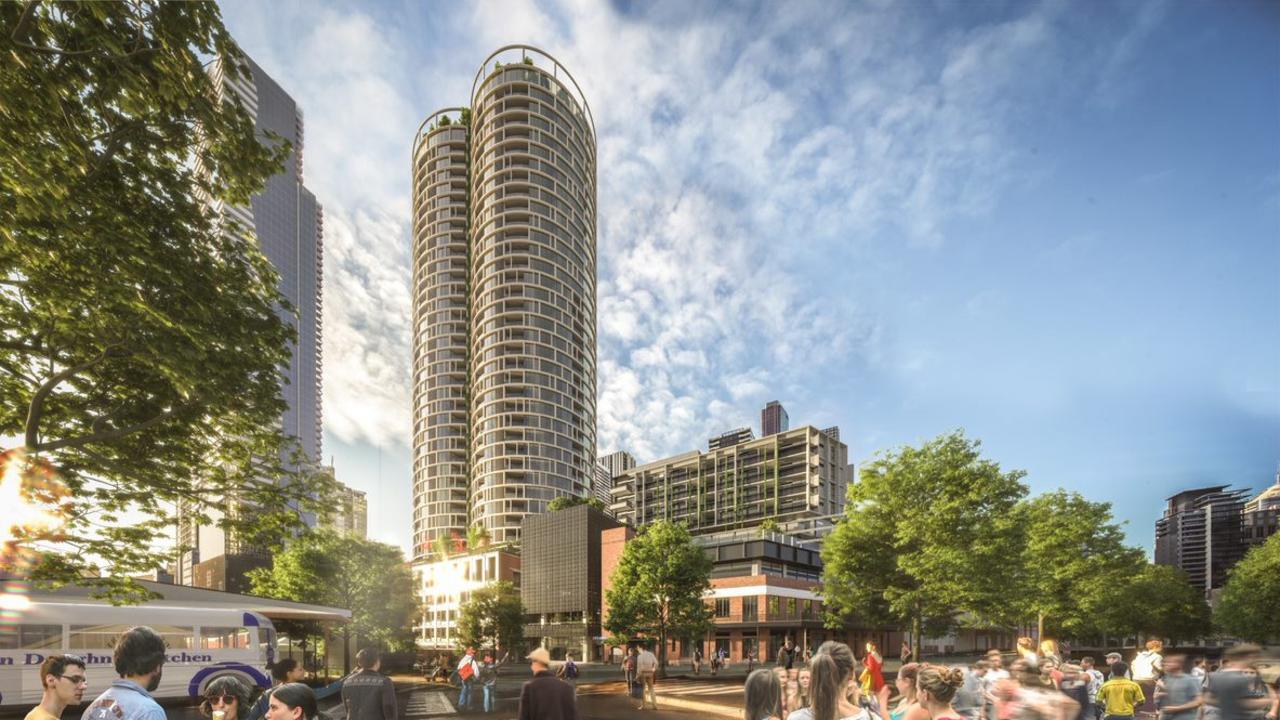 
The great Australian dream is evolving.

It no longer means owning a house with a backyard in the suburbs.

Owning a home is, for some, not even on their radar anymore.

Occupants of a high-rise tower in the Melbourne CBD say they are living in the next best thing — a building that turns on its head the notion that renting is inferior to buying.

The tower, built next door to the Queen Victoria Market, features 490 apartments, a wellness centre, swimming pool, exclusive cinema, a co-working space and a rooftop terrace.

But more importantly it offers what private rentals cannot — security and flexibility.

The $355 million, 39-storey building titled LIV Munro was built by Mirvac and is one of the country’s first build-to-rent projects. It officially opened on Wednesday.

In simple terms, the developer becomes the long-term landlord offering decade-long leases where renters say they feel like owners.

The business model for Mirvac is sound. Instead of the one-off sale price, they receive rent over the life of the building.

Jon Quinnell, 31, who moved into the building shortly after arriving in Australia from London in October, told news.com.au he has been “encouraged to treat the apartment like I own it”.

“You can paint the walls and decorate it how you want. If you want to hang a picture up on the wall, go for it. It’s very much a bit more relaxed,” he said.

“They encourage you to get a pet, which a lot of other sort of private landlords don’t like.”

The Age called the model “burgeoning but pricey” — tenants pay as much as 20 per cent more for an apartment at LIV Munro than they would for a similar apartment that is privately owned.

But Mirvac hopes renters think it is worth it.

“By 2030, LIV will make it an everyday reality for one million Australians to participate in a measurable contribution to a better planet, better communities, and a better life for themselves,” the company says.

“In Australia, housing affordability and security is an ongoing challenge. While it’s a relatively new concept in Australia, build to rent is a proven model in many overseas markets, and we’re excited to lead this here at home.

“As both the developer and landlord, we’re able to create and deliver a completely new property experience; one specifically designed to remove the downsides that typically come with renting.

“For everyday Australians choosing how to live has been a choice of one of two options, unfair rental agreements or an expensive mortgage.”

Mr Quinnell, who spoke to news.com.au from the co-working space on Thursday, said he cannot afford to buy but would consider renting for life.

“The cost of buying is questionable,” he said. “Is it still worth it? I’m not sure. I’m not at the point of buying right now and this is like the great next step.

“And then later down the line, if I do want to buy then I’ll explore (renting for life). Now that I’m here it’s a bit like, why would I leave?”

University students Sofia Corbett, 21, and Kai Becker, 23, are paying $900 a week for a two-bedroom apartment in the complex.

“It doesn’t feel like I’m renting any more,” Corbett told The Age.

“Having the team here to solve any problems is amazing.”

The LIV team says it is renting like never before.

“LIV is built for renters, but unlike any rental you’ve experienced before, with no bonds, the freedom to decorate how you like, and stay as long as you like” they said.

“It’s the decision to take back control, with the flexibility to live how you like, in a place that feels like home. Without the uncertainty or financial pressure.”