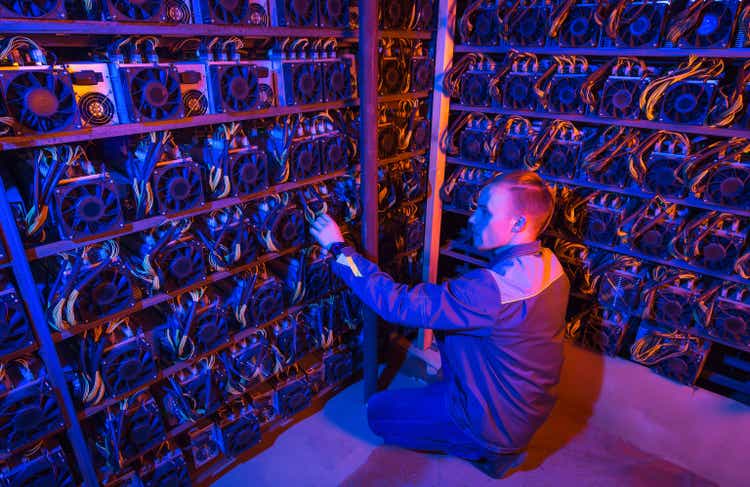 
It has been an absolutely vicious 2022 for Bitcoin (BTC-USD) miners to say the least. We’ve seen the survival of companies like Core Scientific (CORZ), Argo Blockchain (ARBK) (ARBKL), and Iris Energy (IREN) become far less certain over the last couple of months. Marathon Digital (MARA) and Bit Digital (BTBT) have experienced the issues that come from reliance on third-party mining hosts. While some miners have very different business structures, the one thing these companies all have in common is they’re at the mercy of the price of Bitcoin; an asset that is very out of favor in the broader investment world at this point in time.

As such, all miner share prices have been bludgeoned year to date and it has been considerably worse over the last few months as crypto companies have collapsed even while Bitcoin hashrate is still very elevated.

This creates a huge margin squeeze for the miners as their cost to produce the Bitcoin is increasing while the revenue from production declines. Miner profitability is still at all-time lows and many seem to be waiting on the central bank’s next move.

Given the margin squeeze miners have collectively endured, it’s no surprise to see many of the companies now capitulating. Some are losing machines. Others are aggressively selling down their Bitcoin holdings.

CleanSpark (NASDAQ:CLSK) is one public miner that quietly sold down a large portion of its mining stack in the month of October. The company has been selling down its Bitcoin treasury in a relatively orderly fashion for the last 12 months or so. CLSK’s BTC treasury has generally stayed in the 450-600 coin range since the beginning of 2022, that changed in October:

In the chart above, I’m showing the BTC ‘HODL’ stack in green bars. The month over month change is expressed as a black line on a second axis. At the end of October, CleanSpark had just 290 Bitcoin in treasury a month after having 594 – the company’s highest figure of the year. That’s an aggressive sell down of the stack and it reiterates the point that public miners are feeling the crunch in a big way.

The mining companies have taken differing approaches to how they’ve managed their treasuries. For instance, Iris Energy has made no bones about selling its monthly production to fund operations. On the other hand, Hut 8 Mining (HUT) has steadfastly held all of the Bitcoin that it has produced. So far, each of these approaches have had major flaws; Hut 8 is running out of money and Iris Energy is running out of machines. CleanSpark has taken more of a hybrid approach; selling some monthly production while trying to build treasury holdings simultaneously. Depending on how you view the long term viability of these companies, the hybrid approach may not be working very well either.

At month end, CleanSpark has one of the lowest Bitcoin positions with just 281 coins remaining. CleanSpark won’t necessarily be able to take advantage of selling higher to the degree that other companies might. The good news for CLSK is the company’s production capacity has scaled very nicely through 2022.

Production vs. The Market

CleanSpark is it is one of the top Bitcoin miners by monthly production. For the month of November, CleanSpark generated 535 Bitcoin, up from 532 in October. A modest increase but an increase in a shorter month at a time when peers have struggled:

Of the nine publicly listed miners I’ve found that have disclosed full month production figures through official press release, only Riot Blockchain (RIOT) and CleanSpark produced more Bitcoin in the month of November than they did in October.

For CleanSpark, this production comes from an operation that has delivered on leadership’s year end EH/s guidance. In the Q3 earnings report, CleanSpark guided for 5 EH/s by the end of the year and has already achieved that having reached 5.5 EH/s at the end of November. Given the production issues facing the broad market, I think this is a rather impressive milestone for CleanSpark.

By design, Bitcoin’s block reward diminishes over time. Without significant technological efficiency improvements in the mining rigs themselves or much lower energy prices (unlikely, in my view), the cost of revenue for all of these miners is going to essentially double in 500 days. Without those efficiency improvements, it is imperative that Bitcoin’s price rises by at least 100% just to protect the miner margin at current hashrate levels.

If miners need ever increasing Bitcoin prices to survive as businesses, then it just makes more sense for investors to directly purchase the Bitcoin and hold it themselves. Short of that, miners that actually hold significant Bitcoin on balance sheet are going to probably perform better than miners that do not, provided shareholder dilution isn’t overly extreme. CleanSpark has a year and a half to either continue scaling mining capacity or scale treasury. In a perfect world, it could do both.

Bitcoin isn’t going anywhere. I’ll stand by that statement. Even though many publicly listed miners that over-extended themselves are now in survival mode, I think you could argue this is a time to start making some bets in the mining space. That said, none of these companies have a great setup in the current macro environment in my view. Riot is the only company that grew production and treasury over October – but that company’s miner efficiency figures are pretty rough. Riot produced less BTC on 7.0 EH/s than CleanSpark did on 5.5 EH/s. Hut 8 shares should have an immense return if Bitcoin rallies to new highs, but how many more shares will be issued before that happens?

CleanSpark has strong production capacity compared to peers but almost no treasury to speak of at this point. That’s potentially a problem if CleanSpark can’t meaningfully scale its treasury before the block reward is cut in half. If HODLing all production exposes shareholders to dilution risk and selling all production hasn’t worked to protect shareholder value either, what happens if a company has no stack and has to dilute shareholders to fund growth anyway? That’s not a recipe for higher share prices and that’s exactly the risk CleanSpark investors are facing.

All this said, given the top tier production capacity and the very low debt to equity level, I don’t hate the idea of going long CLSK despite the week treasury holdings. But I have no position currently as I’d like to wait for Q3 earnings.