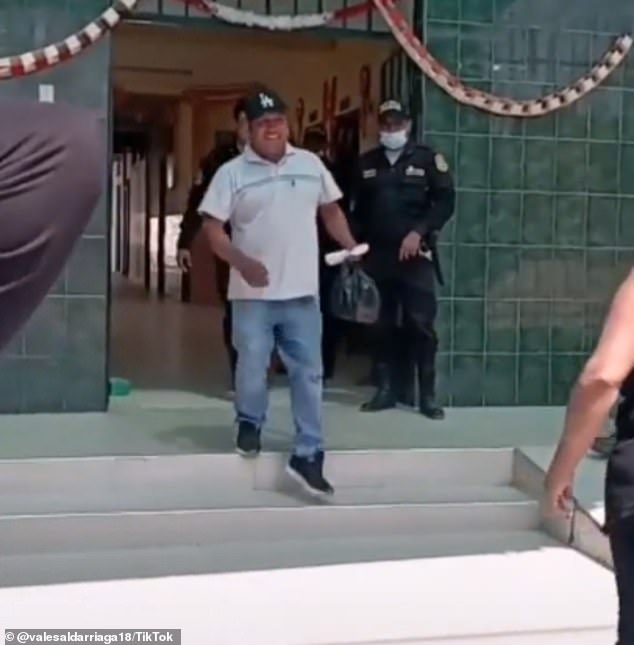 By Adry Torres For Dailymail.com

Here’s a son who wishes he stayed a few more hours behind bars after he was arrested for public intoxication.

The 30-year-old individual, whose name is unknown, flashed a smile as he walked out of a jail in the Peruvian city of Sullana to where his mother was waiting for him, a TikTok video shows.

The man approaches his mother for a hug, but she wasn’t having any of it and whipped him multiple times with a belt to make her feelings about his arrest clear.

Another woman who recorded the man’s release after he spent the night in the jail cell giggled as if she knew what was about to happen and said: ‘The captain has walked out free’.

A man in the Peruvian town of Sullana walks out of jail after he was arrested for public intoxication and was met by his mother, who whipped him multiple times with a belt. The incident was captured on video and shared on TikTok – it went viral and has been viewed more than 3.8 million times since July

The ashamed mother whipped her son twice in the leg and two more times in the arm as cops and bystanders laughed.

People in the background could be heard telling the woman, ‘harder, harder,’ as they struggled to contain their laughter.

The video was shared by TikTok user @valesaldiarraga18 and has been viewed more than 3.8 million times since she posted it to her account in July.

One user on the platform applauded the mother for disciplining her son.

‘Those are the mothers that are missed being seen in the streets,’ the person commented.

The 30-year-old man attempted to hug his mother after he walked out of prison, but she wasn’t entertaining him and hit him with a belt instead

More than 3.8 million views have been generated by a video that shows the moment a 30-year-old man was disciplined by his mother and whipped with a belt outside a jail in Peru

Another user agreed with the mother’s action and wrote, ‘It’s never late to correct a son.’

One TikToker was among the many who saw humor in the mother’s reaction and chimed in: ‘At the end he regretted coming out free.’