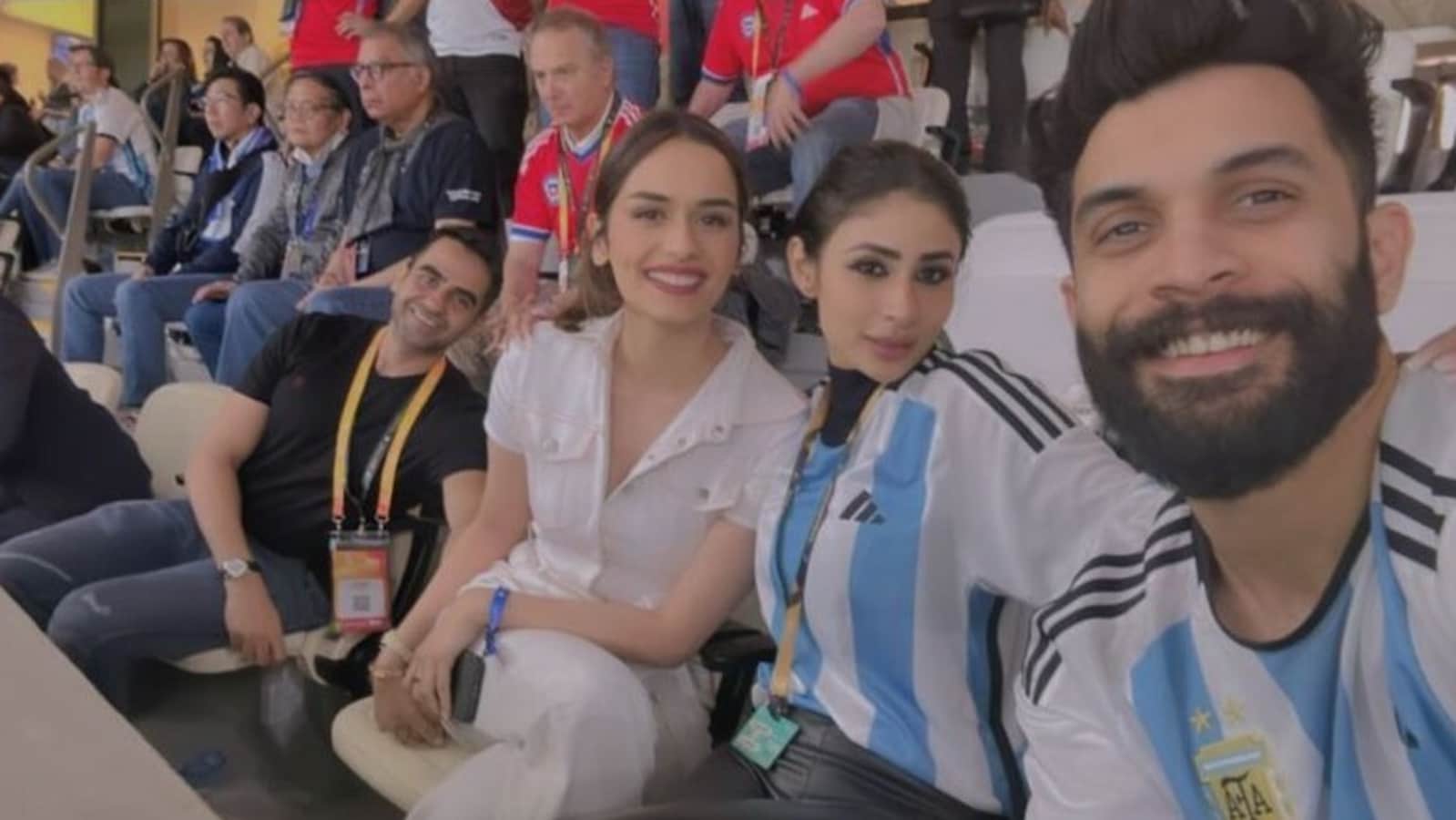 Mouni Roy and her husband Suraj Nambiar, who are in Qatar attending the FIFA World Cup games, caught up with a rumoured couple that is yet to make things official. Mouni and Suraj were seen sitting together with former Miss World, Manushi Chhillar and her rumoured boyfriend, businessman Nikhil Kamath, at the Lusail Stadium and enjoying the game unfolding in front of them on Friday. (Also read: Mouni Roy visits Qatar with husband, slays fashion goals)

After sharing several videos between the quarterfinal action between Argentina and The Netherlands, Mouni shared some photos from the stadium, along with a picture of herself, Suraj, Manushi and Nikhil on her Instagram Stories. The actor captioned the picture in support of the Lionel Messi-led team, “Vamosssss Argentina (Let’s go Argentina).”

She also tagged Suraj, Manushi and Nikhil in the photo. Mouni and Suraj have donned the official Argentina kits, while Manushi wore a white jumpsuit and Nikhil wore a black T-shirt and jeans.

Both Mouni and Manushi are big fans of the Argentinian team and footballer Lionel Messi and were keen to attend the big match in Qatar. Prior to attending the quarterfinal, Mouni also attended the Maradona exhibition in Doha with Suraj and shared some photographs posing inside an airplane. The actor wore an animal printed dress while visiting the exhibition and posed with some merchandise as well.

Manushi, who made her film debut opposite Akshay Kumar in the period drama Samrat Prithviraj, also shared photographs from Friday. However, while she captioned her post, “What a night and what a match!! #fifa #fifaworldcup2022 #argentinavsnetherlands,” she did not share any pictures with Nikhil. The rumoured couple have not publicly announced that they are in a relationship. They have been reportedly dating for while and recently photographs of the pair hanging out have been shared online on social media.

Mouni made her acting debut with the television series Kyunki Saas Bhi Kabhi Bahu, produced by Ekta Kapoor, in 2006. She was last seen in the fantasy adventure film Brahmāstra: Part One – Shiva as the villain Junoon, along with Ranbir Kapoor, Alia Bhatt and Amitabh Bachchan. Manushi will next be seen in the film Tehran with John Abraham.