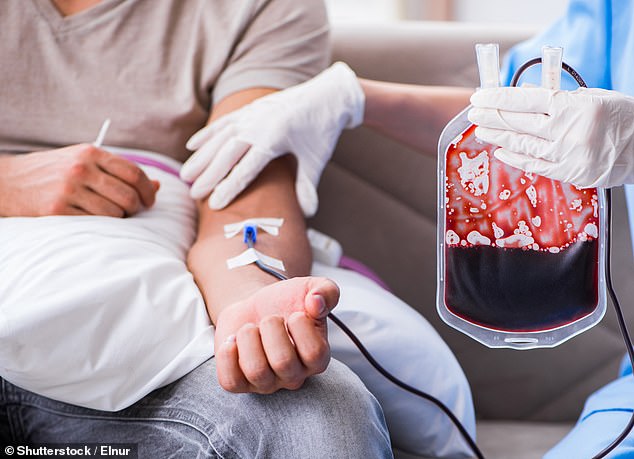 It helped people who had relapsed in their disease more than once after other treatments failed to bring them into remission for an extended period of time.

Dr Ajai Chari from the Multiple Myeloma Program at The Tisch Cancer Institute and lead author of both studies said: ‘This means that almost three-quarters of these patients are looking at a new lease on life.’

Multiple myeloma is a deadly cancer which kills around half of sufferers within five years of a diagnosis.

Talquetamab, administered intravenously, helped reduced cancer or clear it entirely in about 73 per cent of patients who took part in the trials

The new drug specifically targets the protein GPRC5D. Too much of it in the bone marrow is associated with poor survival in patients with multiple myeloma.

Talquetamab binds to GPRC5D which rallies T cells – white blood cells that develop from stem cells in the bone marrow – to fight the cancerous cells.

It was tested in two separate trials, the first of which was published in September.

The Phase 2 results were presented Saturday at the American Society of Hematology annual meeting.

The reflected data from nearly 300 cancer patients who had tried at least three different therapies without achieving lasting remission.

Scientists recorded improvements in symptoms after about a month. People began responding to the treatments at different doses within about nine months.

More than 30 percent of patients in both groups had a complete response, meaning all signs of cancer have disappeared.

The rest of successful treatment patients had a very good partial response or better, meaning the cancer was substantially reduced but not necessarily down to zero.

Talquetamab also worked at least as well or better than other standard treatments for multiple myeloma.

Both of those drugs are Food and Drug Administration-approved.

What is multiple myeloma?

Myeloma is a blood cancer arising from plasma cells, a type of white blood cell made in the bone marrow, the spongy material at the center of larger bones.

It’s sometimes called multiple myeloma as it often affects several areas of the body at once, such as the spine, skull, pelvis and ribs.

Roughly 35,000 American adults will be diagnoses with MM this year.

It is the most aggressive type of bone marrow cancer.

In its early stages myeloma does not cause any symptoms, although sufferers may eventually begin to experience persistent bone pain, tiredness or repeated infections.

Once identified through a blood test, the disease can be controlled by chemotherapy and stem cell transplants, but it cannot be cured.

Valentine’s Day gift for husbands: Our sartorial picks will do the trick

The International Theatre Festival of Kerala turns Thrissur into a global stage, from February 5