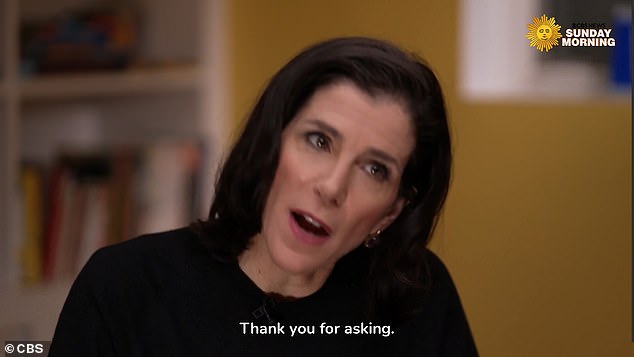 
Paul Pelosi ‘looks like Frankenstein’ after being hit in the head with a hammer, his daughter Alexandra has joked – saying that his scars are healing, but she is worried about the lasting emotional impact.

Paul Pelosi, 82, was attacked in the early hours of October 28 by a man who broke into the San Francisco home he shared with his wife Nancy, the Speaker of the House. She was absent at the time but Paul was attacked and left with a fractured skull.

On December 4 Paul was seen in public for the first time since the attack, joining his wife at the Kennedy Center Honors.

But Alexandra Pelosi, a 52-year-old filmmaker, said that her father still had a long road to full recovery.

‘He is getting better every day. Thank you for asking,’ she told CBS News‘ John Dickerson, in an interview to be aired in full on Sunday.

‘But I think the emotional scars, I don’t know if those ever heal.’

Paul Pelosi and his wife Nancy are seen in September 2022 – one month before Paul was attacked by an intruder, who broke into their San Francisco home and hit him with a hammer

On December 4, Paul Pelosi joined House Speaker Nancy Pelosi in a box seat to view the Kennedy Center Honors – the annual televised ceremony. It was his first time out in public, and he was sporting a black hat and a glove on his left hand

At one point, he could be seen smiling and pointing toward the president, who smiled and gestured back while Vice President Kamala Harris grinned

Alexandra, a mother of two and the youngest of five children, said that she had not slept since the night of the attack.

And she expressed her anger at political opponents of her mother laughing at the attack on her father.

‘I don’t care who you are and who you vote for. Nobody should think it is funny that an 82-year-old man got attacked in the middle of the night,’ she said.

His attacker, David DePape, 42, is being held in custody and has pleaded not guilty to a slew of federal and state charges against him.

The federal charges include kidnapping and one count of assault upon a family member of a U.S. official.

He will next appear in federal court on February 8.

Alexandra was speaking to CBS News to promote her new documentary shadowing her mother, which airs on HBO next week.

Nancy, also 82, is stepping down as Speaker of the House at the end of this month, and will be replaced as Democrat leader by Hakeem Jeffries when the new Congress convenes on January 3.

David DePape, a fringe activist drawn to conspiracy theories, has been charged federally with kidnapping and attacking a federal official, and state charges of attempted murder, burglary and elder abuse

When officers’ responded to Paul Pelosi’s 911 call at the San Francisco home they found Paul Pelosi and DePape fighting over a hammer, according to the six—page indictment

An officer directed DePape to drop the hammer he responded, ‘ummm nope,’ before forcefully swinging it at Paul Pelosi, the indictment said. Police taped off the home on October 28

Nancy Pelosi first became speaker of the House in 2007, she’s shown above after her swearing in, surrounded by her grandchildren and the children of other members of Congress

The Speaker of the House will be a Republican – Kevin McCarthy was nominated in November as the likely leader, but he is battling to keep momentum ahead of the official swearing in in January.

Nancy Pelosi is not retiring from Congress, and was re-elected to serve as a member of Congress representing San Francisco until 2024.

However, there has been some speculation that Alexandra will seek to replace her mother in Congress when she eventually retires.

Alexandra, who lives in Manhattan with her Dutch journalist husband Michiel Vos and their children, has not commented on the speculation.

As long ago as 2011, she said her mother was ready to step down from frontline politics.

‘She would retire right now, if the donors she has didn’t want her to stay so badly,’ she said.

‘They know she wants to leave, though. They think she’s destined for the wilderness. She has very few days left.