Repainting gargoyles and taking a relook at Royal Doulton bath fixtures: Restoring a palace is not mere play 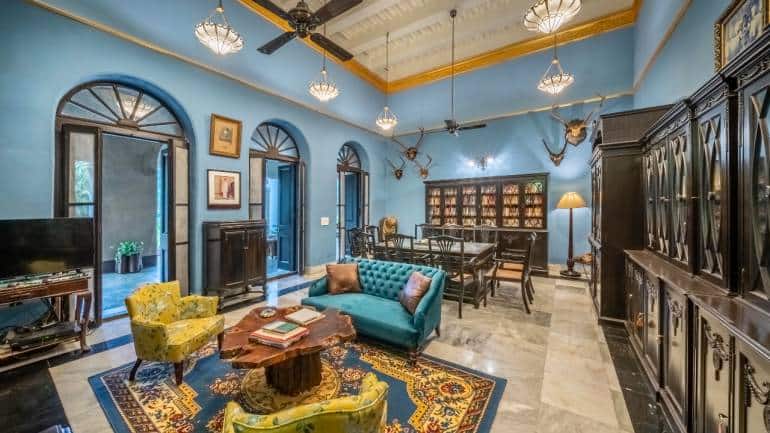 One of two living rooms at Belgadia Palace, Odisha. The palace has 25 rooms with a dining room, museum, three kitchens, two libraries, a billiards room, two gardens, a temple and two offices. (Photo by Vivek Das)

Addicts of Downton Abbey and The Crown will agree that palaces and mansions are fascinating structures. Their portals open up like the pages of a history book, each brick a witness to kings and lords or rajahs and nawabs living their lives in grand style, pampered by servants and enjoying everything refined and beautiful – from fine tapestry to gold gilded ceilings to classical art and glittering chandeliers.

What does it mean then to restore such properties? To add value and years to the structures and also ensure that the past they are protecting is not erased?

Such projects are “gifts for an architect”, though there are worries about how thoroughly one is able to research the construction plans of these grand structures, says Pooja Bihani, principal architect of Kolkata-based Spaces and Design. But hard work leads to very satisfying outcomes, she adds, referring to the restoration work she undertook in 2016-18 of the Belgadia Palace in the erstwhile princely state of Mayurbhanj in Odisha to transform it into a boutique hotel.

How it all began

It was Maharani Sumitra Devi Bhanj Deo, ruler of Mayurbhanj from 1796 to 1810, who ordered the construction work of the brick double-storey palace with its Doric-Corinthian columns in 1804.  One of the largest states of the Eastern States Agency (a group of princely estates in eastern India), Mayurbhanj is said to have been ruled by the Bhanjas for more than 1,000 years until its merger with the Indian Union in 1949.

Other rulers (from 1868 to 1948) added extensions and embellishments. According to the Belgadia Palace website (thebelgadiapalace.com), most of what existed in the building before the most recent makeover were ordered by Sri Ram Chandra Bhanj Deo for his second wife Maharani Sucharu Devi, daughter of Keshab Chandra Sen, founder of the Brahmo Samaj movement during The Bengal Renaissance.

Through the years, the building for which Greek and Victorian architectural styles were adapted, got 25 rooms with a dining room, museum, living room, three kitchens, two living rooms, two libraries, a billiards room, two gardens, a temple and two offices. There are lawns at the front and back.

The brief to Bihani from the clients, the Bhanj Deo family, was simple. They liked the work she had done on their Kolkata residential property and now wanted the upper rooms of the palace touched up. The antiques also had to be showcased perfectly.

When she visited the site, Bihani fell “in love at first sight.” The first huddle with her team members Subhasis Sau, Tuhin Bhattacharjee, Soumadip Mondal and Silki Agrawal included snap decisions on the primary aim: Not to force a concept but to restore the beauty of the 23,500sft building spread over two floors from end to end.

Lack of documentation related to the building as well as information on materials used for construction in the past was a matter of concern. “We began with research on materials of that era, their life and sustainability,” says Bihani. From windows to furniture and from flooring to ceilings, everything was minutely studied for replacement as well as restoration.

The designers managed to recreate the colours used in the past with sustainable paint for the walls.

Some of the biggest challenges were concealing and upgrading the electrical, plumbing, CCTV and WiFi connections within the restrictions of the old load bearing walls. To make it more complicated, all the work had to be done over room heights of over 19 feet. Then there was maintenance of ceiling joists and touching up of old cornices to maintain the symmetry of all arched openings and doors.  Everything was managed successfully.

As Bihani knew that she had to “draw a fine line that does not look too modern or too sunk in the past,” and heartbreaking as it was, the old Royal Doulton bath fixtures had to be replaced and Lalique light fixtures had to give way to energy-efficient fittings as they were beginning to show their age.

The shell of the house was kept intact, but reinforced and the wiring and pipelines replaced. The 25 original rooms were broken down to fit in luxury suites, conference spaces, an extended library, billiards and theatre room, extended dining table, rooftop for performances, gym, spa, museum and verandahs.

Five rooms on the ground floor and four bedrooms on the first floor were carved out from the original structure.

Embellishments were given special attention. Terracotta decorations on the walls were repaired and painted, gold leafing, miniature paintings and murals were restored in old antique shops in Kolkata for use in rooms, hallways, turrets and verandahs.

All art deco and stained-glass pieces as well as chandeliers were repaired and polished and placed at specially selected spots and niches to mimic the interiors of the 1800s.

Restored engraved teak pieces were fixed on the main archways and leakages in old columns were fixed.

The furniture, from Europe and East Asia, was reupholstered, with some of the fabric sourced from Kolkata and Shillong. Energy-efficient light fixtures were put up.

Antique carpets, some a century old, as well as animal remains preserved through taxidermy were cleaned and repaired, the latter mounted on walls or displayed in the museum. Claw footed bathtubs were restored and painted, as were antique lamps, lanterns. Italian marble floors got a polish and old teakwood panels were reused for flooring.

On what she enjoyed the most, Bihani says “The detailing was especially exciting. We believe totally that ‘God is in the details,’ more so in the finer ones.

“So, cornice additions were made around newly built arches to achieve symmetry with older arches in rooms, rich hardware went into doors and windows, vintage tiles and fine tapestry were used where required,” says Bihani.

Window frames and gargoyles, a significant element in Gothic architecture, and often built as water spouts, were repainted and fitted.

The verandahs were made more dramatic with timeless chequered black and white marble.

For, Bihani, the project, which she managed to complete in a record 18 months, was significant as “the act of restoration in itself is sustainable. We restored everything from the furniture to the gardens and even antique crockery. It required meticulous planning…

“But it was worth saving the beautiful palace to recreate the glories of the past.”