Revealed, the science behind Cristiano Ronaldo’s unwavering success at 37 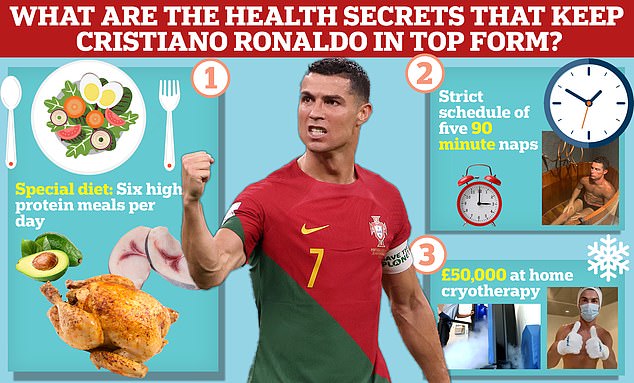 
He’s one of the living legends of football and still churning out key match-winning performances at an age when many professional players have already retired.

But how exactly has Portugal star Cristiano Ronaldo maintained his athleticism at the ripe old age of 37?

International football’s all-time top scorer, with 118 goals, may break another record amid speculation he could sign a £173m-a-year deal with Saudi Arabian side Al Nassr, which would make him the highest earner in sport.

To keep himself in top condition, and attract such eye-watering offers, the footballer has followed a strict regime of a consistent diet, rest and recovery for years.

Here, MailOnline dives into some of the factors that he uses to stay in shape ahead of Portugal’s quarter-final match against Switzerland.

From ‘magical’ chicken, a strict napping schedule and at home cryotherapy. MailOnline examines the health hacks that could be helping Ronaldo stay in top form at 37-years-old

The millennial mainstay of avocado toast is just one of the superfoods that Ronaldo has used as a power-up snack during the day.

Counting as one of his five-a-day, the nutrient-rich fruit is packed with healthy fats, as well as vitamins and minerals, that support good heart and lung health.

Avocado is particularly abundant in potassium and folate which, between them, help keep the heart muscle healthy and form red blood cells, the part of the blood that carries oxygen around the body, helping muscles work.

While excess dairy can be fattening, small amounts, or low fat versions, are rich sources of protein to build muscles and calcium to maintain healthy bones.

The same is true for red meat like ham, which is also rich in protein, though experts say people should only eat small amounts each day.

But on the whole Ronaldo chooses leaner types of meat to get most of his protein fix.

Portuguese national team chef Luis Lavrador has said his nation’s most famous footballer has a particular love of fresh fish.

He is said to regularly tuck into swordfish, sea bass, sea bream and cod.

These species of white fish are high in protein but low in fat compared to red meat.

Ronaldo is strict about what he eats, and has small meals on several occasions in the day, often featuring fresh vegetables and avocado on toast

Sea bass and sea bream are also rich sources of omega-3 fatty acids, which can help keep the heart healthy, according to the NHS.

Another meat, chicken, holds a special place in Ronaldo’s heart, with the star once lauding it as ‘magical’ for its mix of high protein but low-fat.

Salad, whole grains, and fresh fruit are also piled up onto his plate every day.

Originating from South America, quinoa is protein rich compared to other grains like wheat and has anti-inflammatory properties.

But it’s not only what Ronaldo eats that may be the keeping him in shape, but when.

He is said to eat small portions frequently throughout the day, ditching the three main meals of breakfast, lunch, and dinner for six smaller, but protein packed equivalents.

While scientists are still debating the merits of multiple smaller meals for the rest us, Ronaldo’s pattern of eating isn’t unusual for athletes.

Smaller but more frequent meals are said to help meet the high nutritional demands of footballers, giving the energy they need for the range of training they do throughout the day.

Diet is clearly very important to Ronaldo, reportedly having a personal nutritionist who has been following him since his Real Madrid days.

And one thing he seemingly won’t touch is sugary drinks.

The footballer infamously caused a sponsorship headache at the Euro 2020 last year when he pointedly removed Coca-Cola bottles from his seating area at a press conference before shouting in Portuguese: ‘Drink water!’.

However, he has also admitted to the occasional cheat day and enjoying a pizza with his son.

Getting a regular 40 winks: five 90-minute naps every day

For most people getting a solid seven to nine hours of sleep each night to feel refreshed might be a struggle.

But Ronaldo has reportedly ditched this concept entirely and instead opts for five 90-minute naps each day on fresh sheets, for a total of 7.5 hours of sleep.

Known as polyphasic sleep, the basic concept is to break the normal sleep cycle up into a half-dozen naps, though the exact method can vary.

This is broadly the same pattern babies use to sleep, something that usually comes at the expense of their parents’ own sleep schedules.

The supposed benefits of the practise include increased productivity, alertness and the ability to learn and retain new information.

And some scientific studies have found taking a 90 minute nap during the day can improve reactions times for tasks.

However, other scientists say polyphasic sleep doesn’t have any proven benefits compared to a regular sleep schedule.

But Ronaldo has reportedly embraced the theory put forward by sport sleep expert Nick Littlehales who he met while at Real Madrid.

however it is not clear what exact pattern he follows or how often he adheres to it.

Rest is clearly important to the footballer who has previously said: ‘Sleep helps muscles recover which is really important.’

While changing diet and sleep might be within the realms of what normal people can accomplish, another of Ronaldo’s health habits might be a bit a bit too pricey.

After moving back to Manchester United earlier this year, the footballer reportedly had a £50,000 cryotherapy ice chamber imported to the UK.

Cryotherapy chambers use freezing liquid nitrogen to rapidly plunge the air within to -200C (-328F).

The therapy which counts athletes like Usain Bolt, and fellow footballer Erling Haaland as fans, is thought to help reduce inflammation and injury swelling by boosting blood circulation as the body responds to the extreme cold.

Also known as cold therapy, cryotherapy includes an array of treatments that employ extremely low temperatures. Portugal World Cup star Cristiano Ronaldo is a fan of cryotherapy. Ronaldo posed alongside his son outside a cryotherapy chamber for a social media snap earlier this year

For these reasons, some athletes use it to relieve muscle pain and enhances recovery times between games and training.

However, people can’t spend more than five minutes at a time exposed to the extreme cold as this could harm healthy tissue.

Ronaldo, a fan or cryotherapy for almost a decade, takes using it safely seriously.

In a video posted to Instagram in February the star was seen carefully bundling up with a mask, headband, gloves, as well as a pair of socks and crocs as he used a cryo chamber after an intense training session in Dubai.

When using it at home the footballer favoured cryotherapy session lasts just three minutes at a relatively balmy -160C (-356F).

Scientific consensus about cryotherapy is mixed, however.

Some experts say while the technique doesn’t have objective evidence that it works it may act as a positive placebo, making athletes feel better and that they are recovering faster.

REVEALED, the science behind Erling Haaland’s phenomenal success: From installing a £50,000 cryochamber in his home to eating grass-fed beef hearts… how Man City’s prolific hitman has gained an edge on his closest rivals

He is the Norwegian goal machine who is threatening to break every scoring record in England and has been compared to Mike Tyson in his peak.

But there is more to Erling Haaland’s footballing success than his Viking heritage and fearsome physique.

The £375,000-a-week Manchester City striker — who has hit the back of the net 20 times in just 12 games, and is tipped to add to his tally when the Citizens face rivals Liverpool on Sunday — has followed a host of quirky health practices to give him an edge over his rivals for years.

Meanwhile, liver’s particularly high amount of vitamin A is important for vision, the immune system, reproduction and growth and development. In Haaland’s case, this will be supporting his heart, lungs and other organs to work at the highest level when under pressure in games

In 2020, the then 20-year-old told local Norwegian media: ‘I see this as key to improving performance by even just a few percentages.

‘For me, it’s about the small things in the fight to get better day by day. Every day provides a new opportunity to get even better. Basically, it’s a matter of mentality.’

Despite already standing at 6ft 4in tall, Haaland is thought to still be growing and has put on 12kg of muscle in the last 15 months.

He dramatic transformation can be credited to his work in the gym and bizarre diet, which includes offal such as beef heart and liver, as well as specially-filtered water.

The forward, described as being like a monster, also pays special attention to his pre- and post-match fitness regime, even installing a £50,000 cryochamber in his house to help his body recover. Cristiano Ronaldo has used similar technology to keep him in peak fitness.

And Haaland, now 22, uses special techniques to control his circadian rhythm — the 24-hour cycle that acts as the body’s internal clock — including wearing blue-light glasses to reduce the sleep-depriving effects of screens.

READ THE MAILONLINE’S FULL BREAK DOWN OF THE SCIENCE BEHIND ERLING HAALAND’S PHENOMENAL SUCCESS HERE.

Brown noise: How the steady hum of a jet engine could cure your insomnia

Breakfast ISN’T the most important meal of the day, according to experts