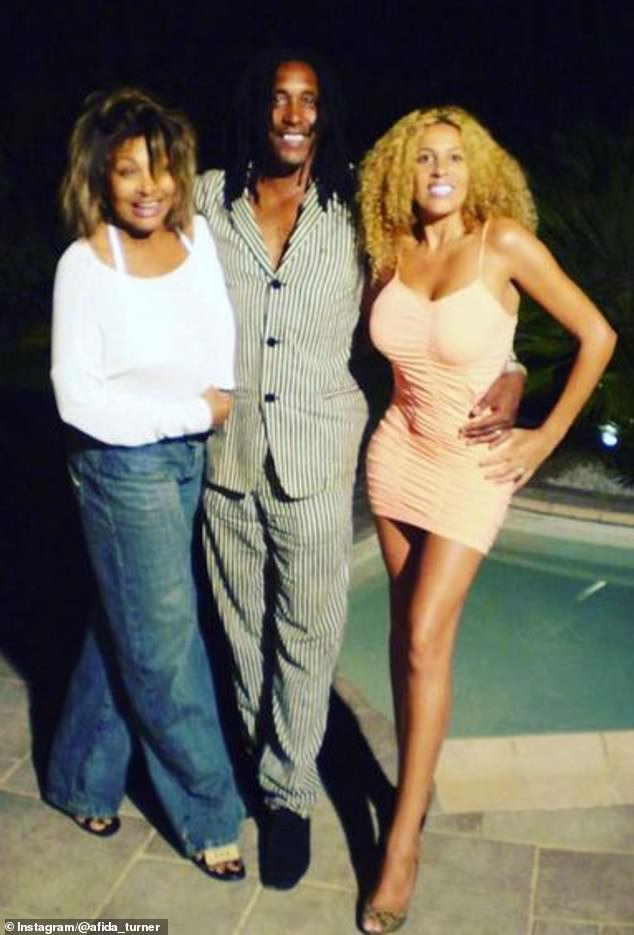 Alongside a photo of Ronnie and his late father Ike Turner, she described him as ‘a terrific musician and bass player’ and an ‘amazing soul’ with the ‘heart of a giant.’

Ronnie Turner, who had survived a previous cancer diagnosis, was found struggling to breathe outside his Los Angeles home on Thursday morning, TMZ revealed.

His wife, Afida (right), posted a moving tribute to her late husband (center) on Friday, sharing photos of them over the years. The couple are pictured here with Ronnie’s famous mother (left)

Tina Turner, 83, posted a heartbreaking tribute to her son, Ronnie, on Friday after it was revealed he died outside his Los Angeles home at the age of 62

His neighbors’ efforts to revive him were unsuccessful and he was pronounced dead at the scene.

A cause of death has not been announced, and it remains unclear whether it was related to his previous cancer diagnosis.

His mother, 83, later posted a black-and-white photo of herself grieving, writing: ‘Ronnie, you left the world far too early.

‘In sorrow I close my eyes and think of you, my beloved son.’

Turner gave birth to Craig when she was just 18, having gotten pregnant by saxophone player Raymond Hill.

Ronnie Turner is pictured with his wife Afida at a memorial service for his late father Ike in 2007. Ronnie was found dead at his LA home on Friday morning

Police were said to be first called to Ronnie’s home Thursday morning, when a person called to report that he was struggling to breathe outside their Los Angeles home.

Paramedics then rushed to the home in San Fernando Valley, where they found bystanders attempting CPR.

But their efforts ultimately failed, and Ronnie was pronounced dead at the scene.

On Friday, his grief-stricken wife posted a rambling tribute to her late-husband, whom she called a ‘true angel’ with a ‘huge soul who is ‘highly spiritual.’

She said he was her ‘best friend, my baby,’ while she was ‘your mummy, your nurse.’

‘I did the best to the end this time,’ she wrote as she shared photos of their time together. ‘I was not able to save you.’

Afida added that she has loved him for 17 years, saying: ‘This is very, very, very bad, I am very mad.

‘This is a tragedy, [you] with your brother Craig and your father Ike Turner and Aline,’ she continued as she wished he would ‘rest in Paradise.’

‘So unfair,’ she concluded.

The couple wed in 2007, after Ronnie made a name for himself starring alongside his mom in the 1993 biopic What’s Love Got To Do With It, which told the story of her life, and playing bass guitar for a number of her tours.

He also played in his own band, called Manufactured Funk.

Afida called her husband her ‘best friend, my baby,’ and shared this photo of him with their dog

He had previously faced a history of drug-related arrests, and was busted in August 1999 for possession of cocaine — with authorities alleging he was selling the drugs.

Ronnie had to register as a narcotics offender in the aftermath, but was said to have failed to kick his addiction — even going as far as to kick his common-law wife and their two children out of his apartment when they tried to push him to stop taking drugs.

The family is said to have taken refuge in their car in the aftermath, with one insider saying at the time: ‘At night they all curled up in the back seat of the car and slept — while Ronnie was happily living in the family apartment paid for by Tina.’

Ronnie is pictured with his older brother, Craig Turner, in an undated photo

Ronnie’s death comes just four years after his older brother, Craig, killed himself in his Studio City home at the age of 59. Craig is pictured here with their mother

The Turner clan is pictured here enjoying a dinner out together. Ronnie is circled

Ronnie was born in 1960, to Tina and her husband Ike. The couple split in 1976 after Tina accused Ike of beating her up, with Ike dying of a drug overdose in 2007.

She also adopted ex-husband Ike Turner’s two sons, Ike Jr and Mike. Ike Jr told DailyMail.com in 2018 that he was estranged from his adoptive mother, who is now living in Switzerland with her husband, German music producer Erwin Bach.

Mike keeps a very low profile, with little known about his private life.

Tina and Ike are pictured with their children in 1972. Ronnie is pictured bottom right in the brown suit. His brother Craig, who killed himself in 2018, stands above him in gray tweed

Ronnie’s death is just the latest tragedy to befall the famous family, four years after his older brother, Craig, killed himself at his Studio City home at the age of 59.

Craig was pronounced dead at the scene from a self-inflicted gunshot wound.

She tweeted afterwards: ‘On Thursday July 19, 2018, I said my final goodbye to my son, Craig Raymond Turner, when I gathered with family and friends to scatter his ashes off the coast of California.

‘He was 59 when he died so tragically, but he will always be my baby.’

Tina had previously described Craig, her oldest son, as a ‘a very emotional kid’ who was upset by how her then-husband abused her.

As she told Oprah in 2005: ‘They saw the black eyes. Ike’s children never reacted, but my oldest son, Craig, was a very emotional kid. He’d always look down in sadness.

‘One day when Ike was fighting me, Craig knocked on the door and said, ‘Mother, are you all right?’

‘I tried to have meals with the children, talk to them about life. But Ike had no sense of that. He’d always come home late from the studio. It was awful.’

Tina revealed at the time she only left Ike after Craig graduated from high school.

Ike had been abusive to the famous singer, with Tina Turner revealing in 2005 she only really started to like the big band performer after Craig graduated high school

Tina Turner  has since started a new life with her husband Erwin Bach (pictured left in 2018 and right, in Basel in 2005) in Switzerland

The couple dished out  $68million for an estate overlooking Lake Zurich

The turbulent story of Ike and Tina is part of music history.

The drug addict son of a Mississippi preacher, Ike, regularly beat up Tina until, after 16 years, she fled in the middle of the night in a bloodstained white suit with just 36 cents in her pocket.

She has lived in Switzerland since 1994 with Bach.

Ike Jnr. later said his mother had all but abandoned her kids after the move overseas, although he said they were looked after financially.

‘My mother is living her life – she has a new husband and she’s in Europe. She doesn’t want to have anything to do with the past.’

According to Ike Jnr, Tina has distanced herself from the part of her life spent with his father and has cut herself off from her children.

As part of that separation, the hitmaker was apparently reluctant to share her life story on stage before ultimately approving the hit musical, Tina.

‘I gave a lot of time to this project, and it was hard at times to revisit through some painful memories, but that was all a long time ago; and what I prefer to focus on is the positive messages that can be taken away from our show,’ she told The Daily Telegraph earlier this year.

‘I don’t think I realized until after the show opened … just how much my story meant to so many people, how much it was needed as a source of inspiration,’ she explained’ she added.

‘I believe if that is the case, then I have a duty to share it.’