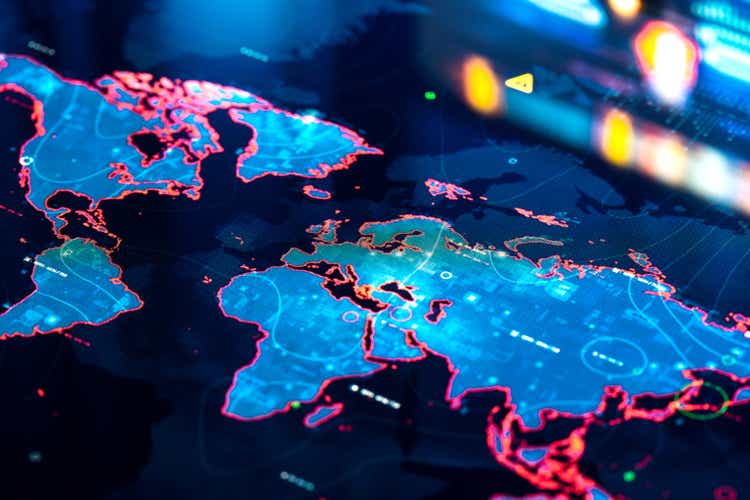 The Schwab Fundamental International Large Company Index ETF (NYSEARCA:FNDF) tracks a basket of large cap stocks excluding the U.S. The fund has returned YTD -11%, but has seen a rally since September, up 7%. FNDF has holdings across the map, with its heaviest concentrations in Japan, the U.K., France and Canada. We rate FNDF a hold for now.

The fund directly tracks the Russell RAFI™ Developed ex US Large Company Index before fees and expenses. It is designed to allow access to large international companies at a low cost, while also offering tax efficiency. It can act as a central part of or an add-on to a diversified portfolio.

With such a large number of holdings, the individual weights are very small. The largest holding is Shell (SHEL) at 3%, followed by Samsung (OTCPK:SSNLF) and BP (BP), each just under 2%.

The top ten holdings represent almost 14%, so all other holdings are each a very small fraction of the composite.

The world is a big place. The basket of large cap stocks in the world is also very big. The biggest challenge facing a fund like FNDF is deciding which assets to include in the portfolio. It’s such a broad fund that it’s impossible to accurately capture the full spectrum of what is available. It’s like trying to find the right crayons in the Crayola 128 pack. Even if you miss by one or two shades it is pretty much going to be the same.

As a result, FNDF holds a little bit of everything, and not too much of anything. A look at the top individual holdings suggests it is an energy heavy fund, but the sector breakdown shows financials leading the way with energy only the fourth largest percentage of the fund.

Growing up, my family used to go to this restaurant where they had a menu option called the difficult decision. Instead of choosing one main course, you could choose three appetizers instead, for a price equivalent to the entrees. (For the record, my mother always chose the chopped liver, stuffed cabbage, and tongue). This way you got a little sampling of everything.

FNDF is like that. It doesn’t offer investors a strong play in any one sector, but a little sampling of many things. If you find something on the menu that looks particularly appealing, you can always order that separately.

A single sector or asset fund lives and dies by that fund. Right now, energy funds are killing it, with one year returns like 100% for Direxion Daily Energy Bull 2X Shares (ERX), or 97% for ProShares Ultra Oil & Gas ETF (DIG). However, ERX has lost 80% over the past five years, and DIG is down 12% over the same time frame.

Funds like FNDF tend to rise and fall in sync with global economies. Right now the world seems to be on the precipice of a global recession. When that happens, economies contract. A global economic contraction inevitably leads to a decline in production, expansion and all the fun things we learned about in macroeconomics and monetary policy. This leads to inflation, which then leads to a tightening of the money supply through increased lending rates, and the inevitable market corrections. It’s kind of a cycle.

So where is the opportunity here? It’s in not losing your shirt, pants and roof all at once by investing in funds and stocks that are hypersensitive to market shocks. FNDF’s diversity can be a safeguard against hyper fluctuations, which, in a down market, is a good thing.

FOMO…we all have it, we don’t want to admit it, but it’s there. How often do we hear someone telling us about the latest and hottest fund. Psst, have I got a stock for you! It’s up 86% on the last three days. It invests in plastics. It’s the wave of the future. You sit there and you smile and nod. Then you run off to the bathroom where you look up this fund. Sure enough, it has returned 86% over the last three days.

What the person didn’t mention, though, is that YTD the fund is down 1,100% and the fund manager was just replaced by a conservatorship and is facing a federal indictment for money laundering and racketeering. Every day one fund or another moves dramatically. If you get in on Tuesday, and sell on Thursday you make a killing. But Monday to Friday, you lose the college fund. Almost no one will be whispering about FNDF, because it’s not that kind of fund.

FNDF is a simple to understand ETF, with a low expense ratio (.25%). It holds a broad array of assets across multiple sectors and countries. The holdings are all name-brand blue chip companies with proven track records. There is a lot to like about the fund’s structure and execution.

In a down market, diversification can be a good strategy. A little from here, a bit from there, if the chopped liver is rancid, go with the stuffed cabbage. FNDF has really taken the diversification model to heart and its returns have reflected that. As a result, we rate FDNF a Hold.