Ski resorts are melting. Here’s what that means for winter vacations 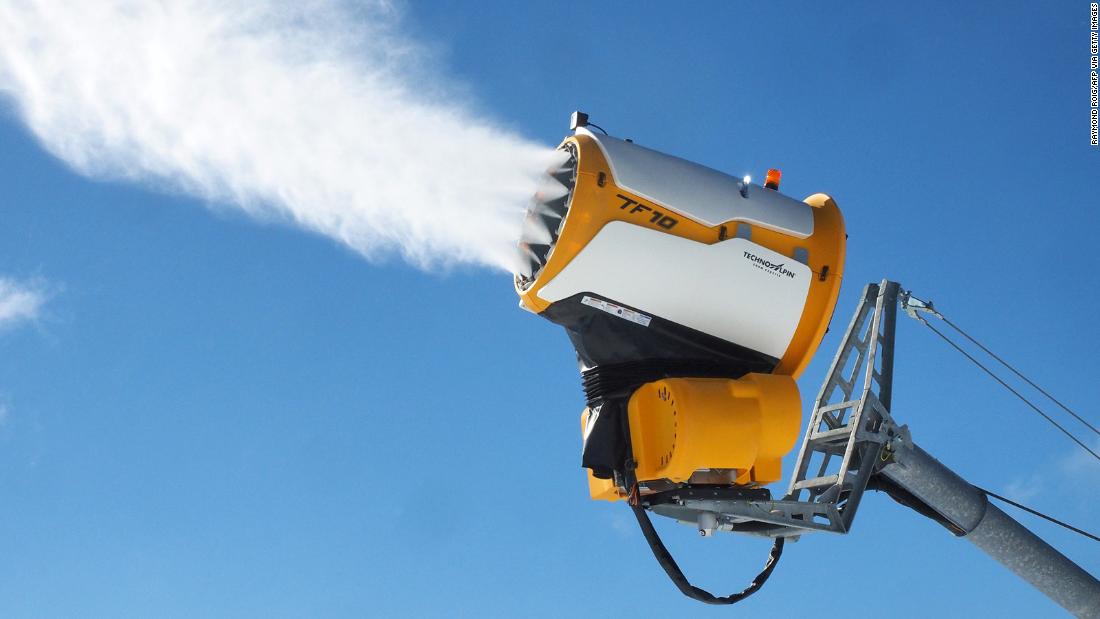 (CNN) — How do you turn a ski resort “green?” The easy answer is to wait until summer.

Winter sports fans are drawn to the mountains for the pristine wild environments, energizing views, pure air and hearty fun in the snow.

But the energy needed for mountain resorts comes at a price, threatening the very premise of a pastime wedded to the natural world and its winter bounty.

And faced with the climate crisis and rising temperatures, resorts now need water-thirsty snow cannons to ensure enough of the white stuff for the business to operate. And that doesn’t even factor in the physical and visual impact of development on the alpine environment.

Planet-warming emissions are rising so quickly worldwide that experts at the World Meteorological Organization estimates that we could see another hottest year on record within the next five years, beating the previous record set in 2016.

The consequences could be devastating for the planet, and many low-level ski resorts are already under severe threat because of a lack of snow.

But thankfully, resorts across the globe appear sincere about helping tackle the climate crisis, with hundreds of millions of dollars being spent on myriad green initiatives, from small-scale in-resort activations to long-term systemic change.

Whistler is among North American ski resorts whose operators have agreed to reduce energy use.

In France, where ski resorts generate about $1.6 billion annually, the umbrella body for resort operators, Domaines Skiable de France, has pledged to achieve net zero carbon emissions by 2037, not including the emissions incurred by local municipalities or visitors.

“It’s a worldwide responsibility to do something,” said Gilles Delaruelle, the head of tourism for Courchevel, one of French skiing’s top resorts and part of the vast Les 3 Vallees area.

“We’ve seen there is climate change on the mountains, we’ve seen different temperatures, we’ve seen new highs on the top of the mountain, we saw the snow not coming like in the past at the same period and at the same level. There is a lot of change and we have to take care of that.

“It’s not a marketing position, it’s a responsibility that everyone needs to have for the next generation. If we don’t protect the nature, we won’t have skiing for the future.”

The four biggest US operators with a collective 71 ski resorts in North America have agreed to collaborate in reducing energy use and “aggressively pursue” renewable energy sources, reduce waste and promote advocacy. The operators are Alterra Mountain Company (including Mammoth and Steamboat), Vail Resorts (including Vail, Park City, Beaver Creek, Whistler), Boyne Resorts (including Big Sky and POWDR (including Snowbird).

“The industry depends utterly on a stable climate and a pristine natural world,” said Auden Schendler, senior vice president of sustainability for the Aspen Skiing Company. “That’s what we’re selling so it’s obvious we should have a role in protecting that.

“We have to run our lifts, we have to heat our hotels and restaurants and we have to make snow. In all of those applications you say, ‘How can we do those most efficiently?'”

Schendler said that while on-site activations are “good business,” it is advocacy, political pressure and movement building that are Aspen’s main weapon in combating climate change, using the fame and influence of the resort to tackle the issue closer to the source.

“The major impact of a ski resort on climate would be remaining silent on climate,” said Schendler. “If you care about this issue, your obligation is not so much to reduce your energy use, it’s to make sure your trade groups are pushing on the politics of climate, it’s to have your CEO educate the public and your guests, that’s the opportunity.

“Ski resorts have big impacts in energy use, transportation and operations, but if you fix the energy system through your advocacy you fix those problems.”

“It took forever, it was difficult, but that changed not just us but our competitors,” said Schendler. “The point is, that’s big-scale change and that’s not the kind of thing you typically hear sustainability executives talking about.”

In another project, Aspen Skiing company spent $5.34 million in 2012 on a plant that converts methane from a coal mine into electricity, which has nearly repaid the original investment.
Aspen also helped develop the LEED (Leadership in Energy and Environmental Design) scheme for green buildings in 1991 and is now developing all-electric buildings, alongside an array of solar projects to supplement its green energy supply.

Schendler, though, warns that carbon neutrality can sometimes be a red herring as paying for schemes to offset emissions doesn’t achieve systemic change.

The website Save Our Snow, which collates sustainability stories from the world’s 250 leading ski resorts, claims 58 are now solely powered by green energy, with 56 of those generating some or all of that on site.
Vail Resorts says it has achieved 85% renewable energy for its resorts as part of its EpicPromise to be net zero by 2030, while Big Sky Resort in Montana operates on 100% renewable electric energy as of 2021 and Jackson Hole Mountain Resort in Wyoming is powered solely by an Idaho wind farm.

In Europe many ski resort operators have been using 100% green energy for a number of years, including St. Anton, Lech-Zurs, Seefeld and Solden in Austria, Les 3 Vallees, Val d’Isere, La Plagne and Les Arcs in France, Pyha and Ruka in Finland, and Laax and Saas-Fee in Switzerland.

“Systemic solutions are the way we need to deal with climate change, we need to get to net zero by 2050 or sooner, ideally,” said Dominic Winter of Protect Our Winters UK, part of the global climate change lobby group founded by American professional snowboarder Jeremy Jones in 2007.

The energy use of resort towns, as opposed to the operations side, is often the biggest contributor to the overall carbon footprint, but high on the list of emissions is the snow-grooming service, in which a fleet of specialist machines smooth down the runs each night to make for a better skiing and snowboarding experience.

Domaines Skiables de France says 94% of greenhouse gas emissions from its operations come from the diesel used to power the grooming machines, or piste bashers. Lift operations (4%) and snowmaking (2%) comprise the rest.

As such, many resorts are working with grooming-machine manufacturers to trial alternative sources of fuel as well as next-generation snow groomers with hybrid diesel-electric, electric or hydrogen engines.

The Compagnie des Alpes (CDA), which operates a number of high-profile French resorts, including Val d’Isere, Tignes, Chamonix and Les Arcs, will switch all 130 of its grooming machines to synthetic HVO fuel (hydrotreated vegetable oil produced from waste) next winter. It should reduce CO2 emissions by 90% and fine particles by 65%.

The group, which is exploring electric and hydrogen groomers with French manufacturer CM Dupon as part of a pledge to be carbon neutral by 2030, says the HVO fuel will lead to a reduction of 9,900 tonnes of CO2 equivalent or 72% of the direct carbon emissions of all its mountain activities excluding electricity. CDA will also educate groomer drivers and lift operators in the most efficient ways of operating to save fuel and energy.

The Swiss resort of Zermatt pays for more expensive sulfur-free “eco speed” diesel for its fleet of working machines, including 29 groomers, which adds about CHF 40,000 each year ($41,000) but generates 11% less carbon monoxide and reduces the concentration of hydrocarbons by 15%.

SATA, the lift company for Les Deux Alpes and l’Alpe d’Huez in France, announced in January 2022 it will partner with Green Corp Konnection (GCK) to convert five groomers and three buses into hydrogen, while Taos Ski Valley in New Mexico, says it will be the first US resort to introduce an all-electric groomer.

“We have the greenest cats available but it’s a niche technology so we’re a little bit at the mercy of manufacturers,” added Schendler. “The play is to get off diesel and move to electric maybe, but probably more likely hydrogen. That technology will arrive but it’s not there yet at a large scale.”

A snow gun in use at southern France’s Font-Romeu ski resort.

Snowmaking is the third major pillar of ski resort operations, necessary to supplement nature’s contribution and ensure runs into resorts and other busy areas have ample coverage.

It works by spraying a high-pressure mist of water into cold air to freeze into snow crystals. Some areas also use a biodegradable nucleating agent or organic particle on which an ice crystal can form more easily.

Val d’Isere’s geography and altitude, with runs ranging from 1,800 meters to over 3,000 meters, means it can open from November through to May, but there are still 900 cannons covering 40% of the ski area, operated by a vast central “snow factory,” the largest artificial snowmaking facility in Europe.

“This is an area that we have been looking into for several years now, and it requires real expertise,” says Aurelie Leveque, Operations Director for Val d’Isère Téléphériques.

“Snow is produced using only water, compressed air and negative temperatures, and when the snow melts, the water goes back into the environment.

“The process doesn’t require any chemical products or additives, and the water that we use comes from the drainage basin that flows into the Isère River, which is filtered before being sent to our snowmaking network.”

Critics suggest snowmaking is a drain on diminishing water resources and energy, with artificial reservoirs creating deforestation, but Schendler suggests the positives outweigh the negatives.

“I’m not really a proponent of snowmaking, I don’t love it, but it’s part of the business and you have to do it as efficiently as you can,” says Schendler.

“Snowmaking is maybe 10% of total energy use on an annual basis. The total water use is a teeny portion of the watershed. It has gotten 10-fold more energy efficient over the last decade because the technology is there.

“Going forward I don’t see us using more energy to make snow. The reason it’s necessary is you have to be able to open your door at a certain time.”

Courchevel has more trees now than when the resort was built in 1946.

Many resorts are now taking a holistic view of their social, economic and environmental impact, with comprehensive sustainability programs in place, from safeguards over the impact on the fauna and flora of a region, to the removal of obsolete lift installations, to limiting food miles in the resort restaurants.

In Courchevel, there are more trees now than when the resort was first built in 1946, while Val d’Isere was recently awarded the French Flocon Vert sustainability certification, is making big strides in the conservation of endangered black grouse.

The other significant elephant in the room when assessing the environmental impact of ski resorts is the huge carbon footprint of visitors to ski resorts, notably foreigners arriving by emission-heavy flights.

A recent study from the French ski resorts of La Clusaz, Le Grand Bornand and Tignes, found that on average 52% of an individual’s carbon footprint for a day’s skiing came in travel to the resort.

Overall, it seems sustainability is far more than just a buzzword in the mountains, but many green projects are just the tip of the global iceberg.

“Are we winning? No. That’s self-evident,” said Schendler. “You’ve got to reverse global CO2 emissions and bend the curve down and that’s not happening, so we’ve got more work to do.”

Morzine in France offers discounts to skiers who arrive by train.

Les Arcs-Peisey Vallandry, France: A new 10-seater features solar panels to generate electricity year round, while the heat from the motors powering the lift will be recycled.