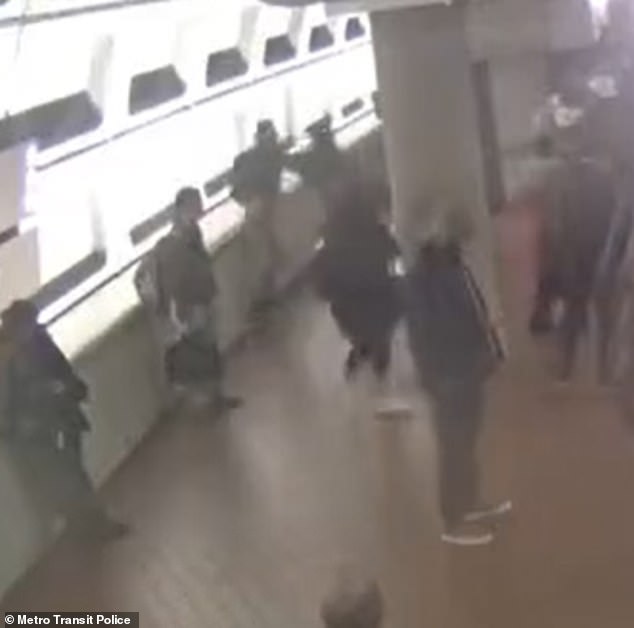 By Ronny Reyes For Dailymail.Com

Commuters fled in terror after an off-duty FBI agent fatally shot a man who got into a fight with him which escalated when they fell eight feet onto the subway platform.

Newly released surveillance footage from the Washington Metropolitan Area Transit Authority shows the moment Troy Bullock, 28, shoved an off-duty FBI agent who has yet to be named, at the Metro Center station on Wednesday.

The agent pushes Bullock back, and the men proceed to struggle before Bullock charges at the official, pushing them both off a platform and falling to another one below.

After they land, the fight continues, with the agent shooting Bullock, who police said was also armed with a handgun.

The gunshot sends commuters into a frenzy, who make a dash out of the station while the incoming train quickly leaves.

Surveillance cameras captured the moment a fight broke out (center) between an off-duty FBI agent (left) and Troy Bullock, 28, at the Metro Center station in Washington DC on Wednesday

During their fight, Bullock pushes the unidentified agent against a low wall, causing them both to fall eight feet below as spectators rush the wall. The FBI agent then shoots Bullock

According to the video, Bullock and the agent appeared to exchange words before the fight began.

No footage of what was said before, of what happened exactly after they fell, or of the fatal shooting itself has been released yet.

The FBI agent was taken to a hospital, where he remains with serious but non-life-threatening injuries.

DC Police are leading the probe into the altercation and shooting, but said they would not comment on the case as the investigation is still ongoing.

In statement regarding the shooting, the FBI said: ‘The #FBI Washington Field Office is cooperating with @DCPoliceDept to investigate an agent-involved shooting that occurred at Metro Center at approximately 6:39 p.m. on December 7.

Meanwhile, fast-acting rail workers and passengers are being commended for their quick actions in the tense situation.

A camera from across the platform caught the moment Bullock shoved the off-duty agent, who then pushed him back (center). The agent is currently recovering from serious injuries

The WMATA rail operator who witnessed the men’s fight on the lower platform opted to bypass the station to keep customers safe.

Lisa Crawford, who was on board that Red Line train, was also touted by her fellow commuters for being the first to tell passengers to get down when she spotted commotion outside the train.

‘I saw all of these people running. People were like running, people were falling down,’ Crawford told WUSA 9. ‘I saw and I reacted, I just started screaming, everybody get down!’

As the investigation over the shooting continues, officials have asked anyone with information or additional footage of the scene to contact police.