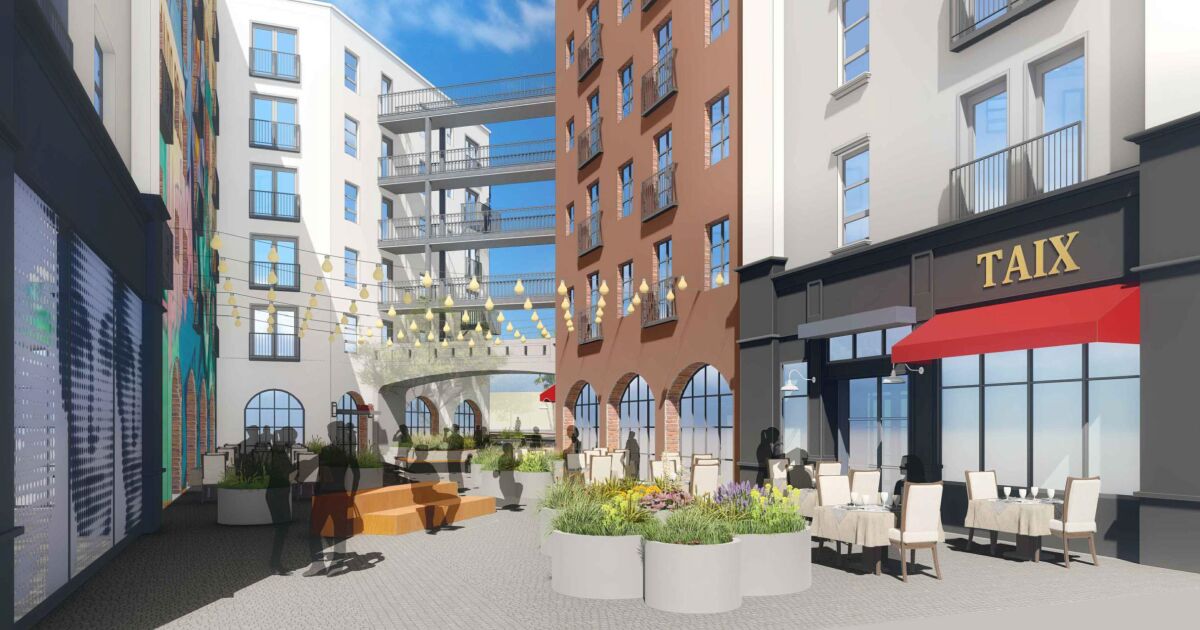 The Los Angeles City Council has removed one of final hurdles for the controversial redevelopment of Taix French Restaurant, voting unanimously to reject an appeal filed by a group seeking to preserve the long-standing Echo Park restaurant’s building.

The appeal could have delayed the redevelopment of the old-school restaurant, known for its tureens of soup and lounge brimming with Dodgers fans after games. Holland Partner Group, a Vancouver, Wash.-based developer, plans to replace the restaurant with a modern six-story building with 166 housing units, two dozen of which would be affordable to low-income households. The building would also host a downsized version of the Taix restaurant.

The redevelopment proposal has alarmed local preservationists who say the beloved building, a stalwart of Sunset Boulevard since the 1960s, has historical significance.

Silver Lake Heritage Trust, a preservation advocacy nonprofit, has been among the most vocal. In October, the nonprofit filed an appeal with the city arguing that various approvals granted the developer — such as an increase in density — should be overturned because the project went through a lax environmental review process.

The council rejected the appeal Friday, sparing Holland Partner Group from going back to the drawing board on some parts of the project.

The restaurant’s owner, Michael Taix, has supported the redevelopment, saying the current building is too large and expensive to operate in. Taix cheered the council’s decision in a Friday statement provided by Holland Partner Group.

“My family is grateful to the community and the L.A. City Council for its broad support of Taix,” he said. “… We hope that construction can begin without unnecessary delay as it is critical that we be able to shift our operations to the new building timely in order for the jobs of our staff can be preserved, and so that our restaurant can continue its operations in a more efficient and appropriate venue.”

The City Council essentially gave its blessing to the project with Friday’s vote. Holland Partner Group had scored another victory in June 2021 when the City Council voted to recognize only portions of the restaurant as a historic monument. The historic designation included the bar top and two red-and-white signs on the building’s exterior. The council did not extend the historic designation to the building itself, which would have complicated the developer’s efforts to demolish it.

The idea to designate specifics elements of the restaurant as historic, the brainchild of Councilman Mitch O’Farrell, disappointed some preservationists, who said the city was setting a dangerous precedent by cherry-picking parts of significant buildings to preserve and scrapping the rest.

“What they’re proposing is a salvage effort. They’re proposing demolishing and salvaging three items that are going to be glued into the new structure,” said Carol Cetrone, president of the Silver Lake Heritage Trust. “We contend that this is not preservation.”

The trust does not plan to appeal the city’s decision.

Separately, a lawsuit filed by the group in 2021 challenging the city’s decision to let the project move forward is scheduled to go to trial Feb. 9, according to attorney Frank Angel, who is representing the trust. The lawsuit alleges that the City Council was overly accommodating to developers and ignored the “procedural safeguards” that govern the designation of historical monuments in Los Angeles.