The end is nigh! Four-in-ten people believe we’re ‘living in the end times’ 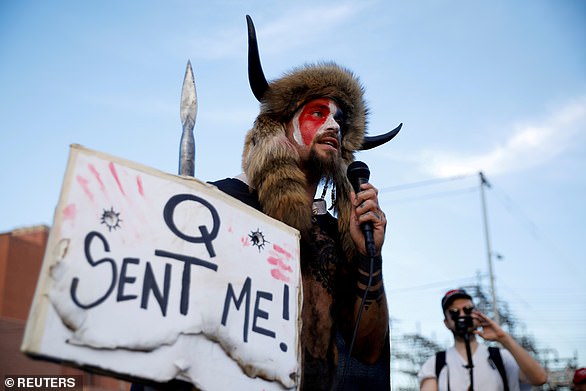 QAnon started on fringe website 4chan, where a poster calling themselves Q left messages claiming to be a senior federal official and purporting to reveal a ‘deep state’ cabal intent on bringing down then-president Donald Trump.

Q grew out of the discredited ‘Pizzagate’ conspiracy that top Democrats were involved in pedophilia and cannibalism from the basement of a Washington DC restaurant, but quickly picked up steam with Q’ leaving ‘clues’ and claims that Trump was going to bring down the deep state.

A core tenet of the conspiracy theory is that a cabal of child-sex predators that includes prominent Democrats, Hollywood elites and ‘deep state’ allies ran institutions and a global child sex ring.

It has become a ‘big tent’ conspiracy theory encompassing misinformation about topics ranging from alien landings to vaccine safety. Whenever the conspiracies turn out to not be true, followers rationalize that the inaccuracies are part of Q’s larger plan.

Followers of QAnon say a so-called Great Awakening is coming to bring salvation.

The ‘Q’ posts, which started in 2017 on the message board 4chan, have also been posted on 8kun, a rebranded version of the shuttered web board 8chan.

Major social media platforms including YouTube, Facebook and Twitter have banned content associated with QAnon and have suspended or blocked accounts that seek to spread it. That’s forced much of the group’s activities onto platforms that have less moderation, including Telegram, Gab and Trump’s struggling platform, Truth Social.

A growing list of criminal episodes has been linked to people who had expressed support for the conspiracy theory, which US intelligence officials have warned could trigger more violence.

QAnon supporters were among those who violently stormed the Capitol during the failed January 6, 2021, insurrection, which attempted to derail the results of the 2020 election.

In November 2020, two men drove to a vote-counting site in Philadelphia in a Hummer adorned with QAnon stickers and loaded with a rifle, 100 rounds of ammunition and other weapons. Prosecutors alleged they were trying to interfere with the election.

Last year, a California man who told authorities he had been enlightened by QAnon was accused of killing his two children because he believed they had serpent DNA.

A Colorado woman was in August found guilty of attempting to kidnap her son from foster care after her daughter said she began associating with QAnon supporters. Other adherents have been accused of environmental vandalism, firing paintballs at military reservists, abducting a child in France and even killing a New York City mob boss.

Police last month fatally shot a Michigan man who they say had killed his wife and severely injured his daughter. A surviving daughter told The Detroit News that she believes her father was motivated by QAnon.