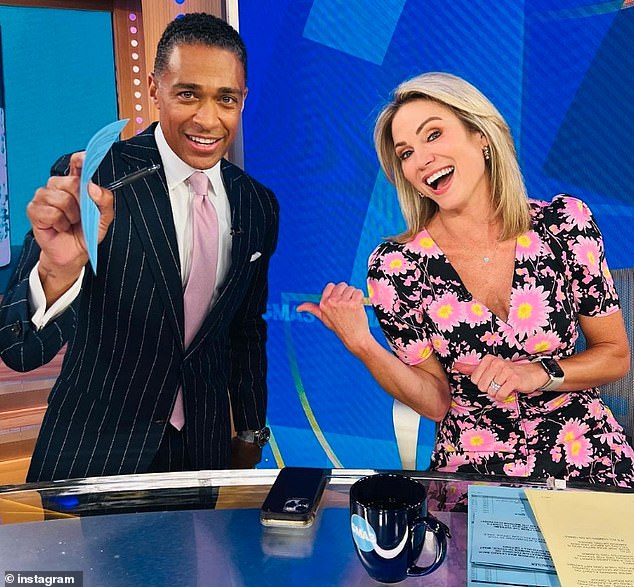 
T.J. Holmes gushed about his Good Morning America co-host and lover Amy Robach weeks before their affair was exposed, a resurfaced interview has shown.

The 45-year-old, in a New York Post sit down on October 21, called the 49-year-old his ‘best friend’ and said working with her on GMA was his ‘dream job.’

‘I am a really, really lucky dude… I am now in my absolute dream job… And I get to sit next to my best friend doing it,’ he said ahead of running the NYC Marathon with her.

‘I never ever ever could have imagined things working out the way they have,’ he added.

Just weeks later, DailyMail.com broke the news the chummy co-hosts were having an affair. They were taken off the air on December 5 while ABC decides their fates.

T.J. Holmes, 45, gushed about his GMA co-host and lover Amy Robach, 49, in an interview with the New York Post, calling her his ‘best friend,’ weeks before their affair was exposed

ABC executives now face a possible racial firestorm if they keep Amy Robach and fire her ‘serial cheater’ lover T.J. Holmes, who broke cover for first time since he was taken off the air

In the October interview, Holmes talked about how happy he was anchoring the third hour of GMA with Robach and shared that he wanted to keep doing what he was doing.

‘So what’s next in my career? I got a great thing going and I want to keep it going as long as I can,’ he said.

But when asked about his five-year plan, Holmes, who has been married to Marilee Fiebig since 2010, responded that he had ‘no idea.’

‘I get the question, ‘Where do you see yourself in five years?” he said. ‘And I have no idea because every plan I’ve had in my life … I did not end up there, but I ended up somewhere even better than I could have imagined.’

Holmes, who was speaking with The Post ahead of the marathon, also shared that it was Robach who got him into running.

Robach, who has been married to ‘Melrose Place’ actor Andrew Shue since 2010, ran the marathon with Holmes this year.

‘I’ve always run as part of exercise, but I never really called myself a runner . . . but she’s the one that got me into keeping up with my time and distance,’ he said.

‘She kind of publicly shamed me for quite a while,’ he added. ‘So yes, it was all Robach.’

Since the couple’s affair was exposed, it has been revealed that Holmes allegedly had affairs with other staffers at ABC. The company is investigating into whether Holmes violated any rules by being involved with anyone in a less senior position.

Photographs posted on Robach’s Instagram as recently as March show Holmes, 45, with his arm casually draped on her husband Andrew Shue’s shoulder, with both men apparently firmly part of Robach’s, ‘half marathon posse’

In June this year, Robach also shared photos of the two co-hosts covering the Queen’s Diamond Jubilee for GMA in London, where their romance is believed to have first blossomed

The couple was suspended ‘indefinitely,’ on Monday, with Stephanie Ramos, 40, and Gino Benitez, 37, taking their seats in the show’s lunchtime hour, GMA 3 What You Need to Know.

But, according to well-placed sources, what staff need to know is what bosses plan to do now.

GMA anchor and newsroom doyenne Robin Roberts, 62, is ‘furious’ with the affair which she has slammed as ‘messy’ and ‘tainting the brand.’

Now, DailyMail.com has learned, a frustrated Roberts has taken her concerns to the top and complained to ABC’s parent company Disney about the lackluster response to the scandal.

Roberts told Holmes and Robach in no uncertain terms to ‘knock it off’ when she caught wind of the affair some time ago.

But while devout Christian Roberts is calling for action, top brass are staring down the barrel of a possible racial firestorm.

Robin Roberts, 62, is ‘furious’ with the affair between Amy Robach and T.J. Holmes which she has slammed as ‘messy’ and ‘tainting the brand’

‘Letting the black man go and keeping the white woman? It looks like the worst sort of double standard and would leave them wide open to racism allegations,’ a source said

A source explained, ‘There’s been all these stories about T.J being a serial cheater with at least one other affair and hints that there are more.

‘But how can they let him go and keep Amy? They love her and they don’t want to lose her. But imagine the possible backlash if they go down that path.

‘Letting the black man go and keeping the white woman? It looks like the worst sort of double standard and would leave them wide open to allegations of racism.’

One insider told DailyMail.com, ‘Kim Godwin [President of News] is hopeless. She’s just busy making sure her best interests are covered and doesn’t seem to be able to come to any decision at all. She’s totally unavailable and mostly hiding in her office.’

According to one, executives may also be afraid of taking a hard line for the precedent it would set. One said, ‘If Amy and T.J are punished for their affair they’ll have to bring a prison bus to the studios to ship out all of the other couples who’re at it at ABC!’

Indeed, one former ABC producer told DailyMail.com that the newsroom was ‘a hotbed’ of indiscretions and gossip. They said, ‘I’ve honestly never worked anywhere like it.’

It has also been pointed out that, for Disney Chief Executive Officer Bob Iger, who was in New York this week, talk of inter-office relationships may all be a little too close to home for comfort.

Iger, 71, was President of ABC when he met his wife, Willow Bay, 58, a GMA presenter whom he married in 1995, just one year after divorcing first wife Susan, 74.

T.J. Holmes and Amy Robach are seen with ABC President Kim Godwin in an Instagram photo in March. One insider told DailyMail.com, ‘Kim Godwin [President of News] is hopeless. She’s just busy making sure her best interests are covered and doesn’t seem to be able to come to any decision at all. She’s totally unavailable and mostly hiding in her office’

Holmes broke cover for the first time since his suspension, Friday afternoon. Pictured exclusively by DailyMail.com he was dressed casually in black sweats and a jean jacket and carried a Christmas tree stand

He acknowledged DailyMail.com as he headed into his apartment building in New York’s financial district but declined to comment

Disney Chief Executive Officer Bob Iger was President of ABC when he met his wife, Willow Bay, a GMA presenter whom he married in 1995, just one year after divorcing first wife

Holmes broke cover for the first time since his suspension, Friday afternoon. Pictured exclusively by DailyMail.com he was dressed casually in black sweats and a jean jacket and carried a Christmas tree stand.

He smiled and waved, acknowledging DailyMail.com as he headed into his apartment building in New York’s financial district but declined to comment.

He cut a distinctly more chipper figure than his lover Robach, seen a day earlier walking her goldendoodle, Brody.

Then, an apparently weary Robach told DailyMail.com, ‘It’s really kind of over.’ It was unclear whether she was referring to the furor or the relationship that sparked it.

She and Holmes have not been seen together since they were taken off the air despite early claims to be, ‘openly dating’ and determined to ‘grow their relationship.’

It is more than a week since DailyMail.com broke the story of Holmes and Robach’s affair, a relationship that left both their marriages in tatters.

Robach, 49, split from husband of 12-years, actor Andrew Shue, 55. And Holmes, 45, has been kicked to the curb by long-suffering wife, attorney Marilee Fiebig, 44, to whom he was also married for 12 years.

Behind the scenes, ABC insiders have admitted they were not surprised that Holmes and Robach were an item. But they were ‘shocked and dismayed’ at the way it became public and are angered by the network’s failure to adequately respond.

Since they began anchoring GMA 3 in 2020, the two hosts have been known to have a close friendship off screen, with both often sharing photos together from ABC’s studio on Instagram

As it stands, the network seems stuck with insiders telling DailyMail.com that staff are confused and in the dark since Godwin made the decision to remove Holmes and Robach from the air.

She made the call after news broke that Holmes had conducted a three-year affair with then married GMA producer Natasha Singh, 37 – an illicit relationship that pre-dated his affair with Robach.

But, sources say, the silence from the top has been deafening ever since.

Rumors that Holmes and Robach were having an affair had started at the network long before the pair began co-anchoring GMA 3 in 2020.

In fact, in 2017 Holmes went to ABC News executives to assure them that his relationship with Robach was purely platonic after learning that the hallways were buzzing with rumors of an affair.

He told bosses these were ‘absolutely not true.’ As it turns out, Holmes was having an affair at the time, just not with Robach. His affair with GMA producer Singh – one of Robach’s best friends – lasted from 2016 and 2019.

Sources told Page Six that Singh was very much in love with Holmes, even giving him a key to her apartment when she moved from LA, which is where she was based when the relationship began, to New York. She has not commented publicly.