TSMC: Taking A Page From The Intel Playbook (NYSE:TSM) 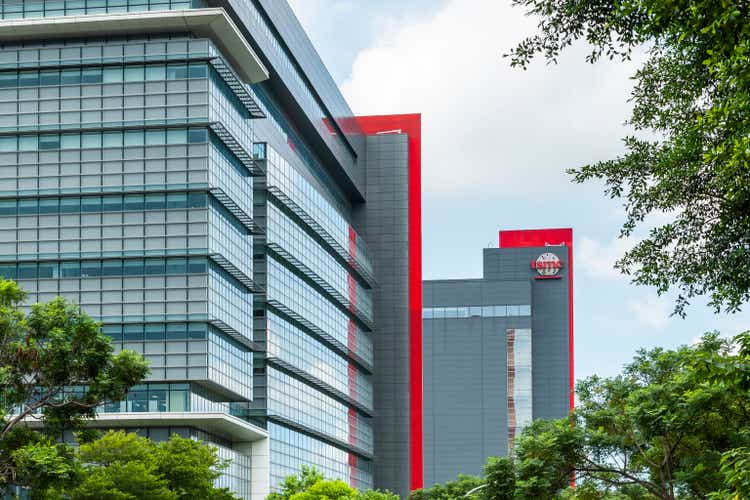 Shortly after my recent comparison of Intel Corporation (INTC) and Taiwan Semiconductor Manufacturing Company Limited (NYSE:TSM) (“TSMC”), the latter is already confirming my thesis that Intel will be the new king of the hill going forward, by announcing a $40B investment in a new… trailing-edge fab in Arizona. Since TSMC will already have lost its process leadership by 2026, opening a TSMC N-1 fab in Arizona means that this will represent an N-2 fab compared to the leading edge.

So, despite statements of endorsement by the likes of Apple (AAPL), Advanced Micro Devices (AMD) and Nvidia (NVDA), TSMC’s endeavor to internationalize its manufacturing footprint is just a breadcrumb, with Intel remaining the sole provider of leading-edge foundry services in the U.S. and E.U.

First, it was reported that TSMC – likely due to customer request from Apple – had “upgraded” its plans for its first Arizona fab. This fab was announced a few years ago as a 5nm fab, scheduled to become operational in 2024. However, the new reports (and confirmed by TSMC) indicate that TMSC is planning to produce 4nm chips instead.

The significance of this is minute. Already since the initial announcement, it was known that 5nm would be trailing edge technology by 2024. The “upgrade” to 4nm hasn’t changed any of this, since TSMC’s 4nm delivers a “whopping” 6% shrink over 5nm, making it simply a small derivative node of the 5nm technology. Before the nanometer marketing wars, this derivative node would have been called something like 5nm+. See for example this slide for a few of the different 28nm derivatives.

The second announcement was that there will be a second fab, with the total Arizona investment increasing from $12B to $40B. The second fab will begin operations in 2026, and it will be a node more advanced, producing 3nm. This will improve the total capacity from 240k wafers to 600k wafers per year.

However, the issue remains that TSMC continues to invest in trailing-edge capacity in the U.S. Its new 5nm fab will be an N-2 fab in 2024 because Intel will have 20A (2nm) by then. The second fab will be one node more advanced, but also two years later, which means Intel will have 14A by then (barring any delays, obviously), maintaining the status quo of the Arizona fab being two nodes behind.

Despite the multitude of endorsements from the likes of Apple et al., and despite the TSMC press release stating that it is bringing “leading-edge” manufacturing capacity to the U.S., the reality is that it is not.

Nevertheless, for some silver lining, TSMC said that the fab will generate $10B revenue per year. Given the wafer output mentioned above, this implies an average wafer price of around $17k. While some commentary said that this fab will only add a low single-digit fraction to TSMC’s global manufacturing capacity, given that it will produce relatively leading-edge capacity (compared to older fabs such as 180nm), it could contribute a nearly double-digit percentage of TSMC’s total revenue (assuming TSMC’s revenue grows to over $100B by then), which is still respectable for just two fabs.

While surely in 2026 all the above companies will still be selling 3nm products, since N2 production is only starting in Q4’25 (which implies the first N2 iPhone will launch in the fall of 2026), overall TSMC now seems to be taking a page from the Intel playbook of the last several years by investing in trailing-edge fabs. So, as Intel itself is an example of, history suggests that this is simply not a winning strategy.

Overall, this is significantly shifting the winning cards to Intel.

In the case that all the above companies remain TSMC customers, then, as mentioned above, Intel will be two nodes ahead in terms of U.S.-based manufacturing technology. For those to whom N3 vs. 14A seems like a minor difference, note that all the damage AMD has done to Intel in the data center was with a process advantage of a bit over 1 node (14nm vs. 7nm, which in terms of density is approx. a 2.4x difference).

Of course, these companies will surely still buy wafers manufactured from Taiwan, but those will also be a node behind (N2 vs. 14A), which still confirms the thesis of Intel being the new king of the hill.

In any case, if any company decides to go shopping for a leading edge foundry in the U.S. due to geopolitical reasons (although there admittedly isn’t much evidence this is major driver, although Intel has disclosed it is now engaged with 7 of the top 10 foundry customers), then Intel should emerge as the clear winner.

Given that this article discussed 2026, there is still quite some uncertainty. Despite Intel not having experienced any further process delays for well over two years now, many people continue to doubt Intel’s ability to execute. Still, given that Intel is currently having 18A test chips in the fabs, even if 14A gets delayed, then Intel would still be at parity with TSMC overall, or one node ahead compared to TSMC’s U.S. fabs.

Another “risk” is that (unless the geopolitics worsen significantly) ultimately there is no reason why companies such as Apple wouldn’t continue to buy TSMC wafers made in Taiwan, which will be one node more advanced than its wafers from the U.S. Put differently, it is unlikely that any company will start its chip development process like this: “We’re going to manufacture this new chip in the U.S., let’s decide the best U.S. foundry for this chip [which would be Intel as discussed above].”

Although, this does fit into the general theme that TSMC is simply jumping onto the CHIPS Act bandwagon to build fabs in the U.S., even if they are not state-of-the-art fabs. Lastly, though, there is no fundamental reason why TMSC couldn’t either build a leading-edge fab or upgrade, for example, the 5nm one to its latest process tech down the line.

Ultimately, the impact of the new Arizona fab(s) will be rather small. While the second fab will make the overall capacity a bit more respectable, the majority of TSMC’s capacity will still be located in Taiwan. This is especially the case for TSMC’s leading edge capacity.

For comparison, one of the initial criticisms or concerns about Intel’s foundry effort with Intel Foundry Services (started in 2021) was that it represented a trailing-edge foundry which hence would have difficulty attracting fabless customers. By 2026, the same could be said about TSMC instead: an N-2 fab will only be moderately interesting, as it will not be able to make the chips that the likes of Apple, AMD or Nvidia would want (or at least have to) produce in order to offer industry performance and power leadership. Simply put, when someone like Tim Cook has to decide on where to source its 2026 U.S. wafer capacity from, TSMC is not making this a hard decision: I would predict that none of the (major M- and A-series) chips Apple announces in 2026 will be manufactured in the Arizona TSMC fab.

That is not to say this TSMC fab will be completely useless. For example, one of the reasons Intel acquired Tower was to offer a complete trailing to leading-edge process portfolio. Nevertheless, that is still different from purposely investing in a brand-new N-1 fab.

So overall, the new announcement hasn’t changed the thesis: I remain moderately bullish on TSMC, mostly/simply due to the favorable valuation.