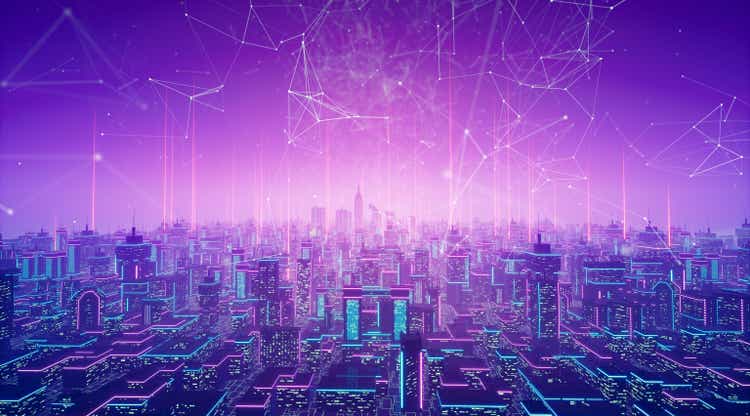 
Unity (NYSE:U) is the “world’s leading” platform for creating real-time 3D graphics and content. Its platform has been used to make over 50% of the world’s video games, according to the company’s website. Popular titles include Pokemon Go, Rick and Morty, Jurassic World Alive, and many more. The company is also a leader in VR and AR gaming. Therefore, I forecast Unity to benefit from the growth in the “Metaverse”, an industry that is expected to grow at a rapid 47.6% compounded annual growth rate. This means the industry value is expected to scale from ~$100 billion in 2022 to over $1.5 trillion by 2029. In this post, I’m going to break down the company’s business model, financials, and valuation. Let’s dive in.

There has been a lot of talk about the “Metaverse” recently with companies like Facebook (META) even changing its name to “Meta” and investing billions of dollars into the industry. However, I personally believe Unity is in a stronger position to easily capitalize on the growth of this industry, as they have effectively been creating the “Metaverse” for decades. The “Metaverse” is really a virtual world that is basically a gaming graphics engine, which is what Unity provides. Back in 2014, I experimented with Unity and built an Augmented Reality [AR] based robot using the Unity game engine. This was before the “Metaverse” was mainstream, but already Unity was ahead of its time. The company has since expanded its business further into the Metaverse with new product offerings such as “Digital Twins”, which I will discuss more about in the next segment.

In November 2022, Unity finally closed the acquisition of ironSource, a mobile app monetization platform that connects apps with advertisers. Unity outlined a number of synergies between the platforms which include analytics, publishing tools, and more.

Unity offers a “product-led” pricing strategy that basically gives users access to a free version to begin development. This is a brilliant model as it has created an entire community of Unity developers who use the platform. The company can then charge professionals for usage and also enterprises.

Unity reported strong financial results for the third quarter of 2022. Revenue was $322.9 million, which increased by a solid 13% year over year. This was driven by strong “Create Solutions” revenue which increased by a blistering 54% year over year to $128.6 million and contributed to 39% of total revenue. This segment was driven by strong growth in the core Unity Engine as well as the company’s newer segments, “Digital Twins” and “Artistry”.

The company is continually innovating its products with various new features. For example, its “Digital Twins” platform offers creators the ability to make digital versions of real-world environments. This has many applications from improved virtual collaboration, to marketing. For example, in the third quarter, U.K. based construction company Tilbury Douglas utilized Unity to launch its Connect Configurator. This web-based platform enables buildings to be designed using real-time 3D (RT3D) content. The platform uses RIBA (Royal Institute of British Architects) models to speed up design time and give clients insights about cost, build time estimates, and carbon.

The Orlando Economic Partnership is also creating the “world’s first” immersive 3D regional Digital Twins using Unity. This will consist of an 800-square-mile region and over 80 different data sources. The idea is to provide companies with an effective way to expand their businesses to Orlando through the understanding of the infrastructure, region, and demographics.

Unity is also poised to benefit from the growth in remote working, an industry that is forecasted to continue to grow at a rapid 22.3% CAGR and be worth over $67 billion by 2028. The company realized that creative work and collaboration can be challenging in a remote scenario, therefore the business made two acquisitions to solve this problem and spearhead this market opportunity. The first was the $320 million acquisition of Parsec, a remote desktop company that allows creative professionals to work together from anywhere easily. The business also acquired SyncSketch in 2021, which is a tool used for real-time collaboration by artists and animators. Together, these two acquisitions make up Unity’s new “Create Anywhere” business. As expected, this business segment reported strong growth with Annual Recurring Revenue [ARR] increasing by over 100% year over year. This business segment now has over 25 customers which contribute over $100,000 in ARR, as Unity continues to target enterprises. In the third quarter, the company closed its largest Parsec-related deal to date which was worth over $1 million in ARR.

A notable customer win was the HBO Max show “Raised by Wolves” from the iconic Product Ridley Scott. The series is set in a realistic-looking sci-fi world and its distributed design team used SyncSketch to collaborate on close to 3,000 complex visual effect scenes.

During this high inflation environment, identifying companies with “pricing power” is necessary. In this case, I noticed that Unity has managed to raise the price of its offering from between 13% and 25%, which is bold but also endorses the value proposition to users.

Operate Solutions revenue declined by 7% year over year to $171.7 million. This decline was mainly driven by the advertising side of the business which experienced headwinds due to the macroeconomic environment. However, a positive is revenue did increase 8% quarter over quarter which was some consolation. In addition, the company has increased the number of new publishers opting for advertising placements with Unity. Therefore, as the advertising market improves, I imagine that this segment will start to grow again. The company also increased its Strategic Partnerships and Other revenue by 28% to $22.6 million, which was positive.

In Q3 ’22, Unity reported a non-GAAP gross margin of 74%, which was down from 81% in the prior year. This decline was driven by a different monetization mix (less ad revenue), which meant a lower margin profile overall. There were also some costs related to the acquisition of the visual effects studio Weta, which is known for creating the iconic Marvel supervillain Thanos.

Unity also reported GAAP earnings per share of negative $0.84, which missed analyst estimates by negative $0.25. A positive is on a Non-GAAP basis, EPS was negative $0.14, which beat analyst estimates by $0.01. This was driven by a 29% increase in operating expenses from $349.5 million in Q3 ’21 to $450.6 million by Q3 ’22. This was further driven by a 39% increase in R&D expenses to $248.4 million, which I don’t think is necessarily a bad thing as the company is investing in product innovation to stay ahead. However, I would like to see improvements in Sales and Marketing expenses which increased by 12.5% year over year to $109.6 million. General and Administrative expenses also increased by 25.6% to $92.6 million. Over time, I would like to see improving operating leverage in the G&A expenses and management aims to deliver $100 million in total cost savings over the next couple of years, which should improve the profitability position substantially.

Unity reported a trailing 12-month net dollar expansion rate of 111%, down from 142% last year. This was driven by the aforementioned issues with the operating businesses. However, anything over 100% is still strong and means customers are finding the product “sticky” and spending more.

Unity has a solid balance sheet which consists of $1.686 billion in cash and short-term investments. In addition to $1.7 billion in long-term debt, which mainly consists of convertible notes recently issued.

In order to value Unity, I have plugged the latest financials into my advanced valuation model which uses the discounted cash flow method of valuation. I have forecasted 23% revenue growth for next year and 30% revenue growth over the next 2 to 5 years. Next year’s growth rate is based on management guidance, which is tepid due to the recessionary advertising market. However, in years 2 to 5, I have forecasted a growth rate aligned with management’s “consistent” long-term growth forecast.

To increase the accuracy of the valuation, I have capitalized R&D expenses which has lifted net income. In addition, I have forecasted a target pre-tax operating margin of 28% over the next 8 years. I forecast this to be driven by the continual integration and synergies derived from its acquisitions, in addition to increased scale and improved efficiencies from its core platform.

Given these factors, I get a fair value of $37 per share. The stock is trading at $35 per share at the time of writing and, thus, is slightly undervalued or “fairly valued” to be conservative.

As an extra data point, Unity trades at a Price to Sales ratio = 10.6, which is cheaper than historic levels of between 15 and 50 relative to industry peers (but very different) companies such as engineering design software company Autodesk (ADSK), which trades at a slightly cheaper P/S ratio, as does Adobe (ADBE) with a P/S ratio = 7.94.

The advertising market is currently going through a cyclical decline as advertisers are pulling spending due to the recessionary environment. A positive is the economy has been cyclical historically and advertising spend should rebound in the future.

Unity is a best-in-class technology leader in 3D visualization and graphics. The company has continued to produce solid financial performance despite a cyclical decline in both advertising and the gaming industry as a whole. However, Unity is in a strong position to benefit from the growth in the Metaverse and remote working thanks to its strategic acquisitions. The stock is “fairly valued” intrinsically and undervalued historically; thus, it could be a great long-term investment.