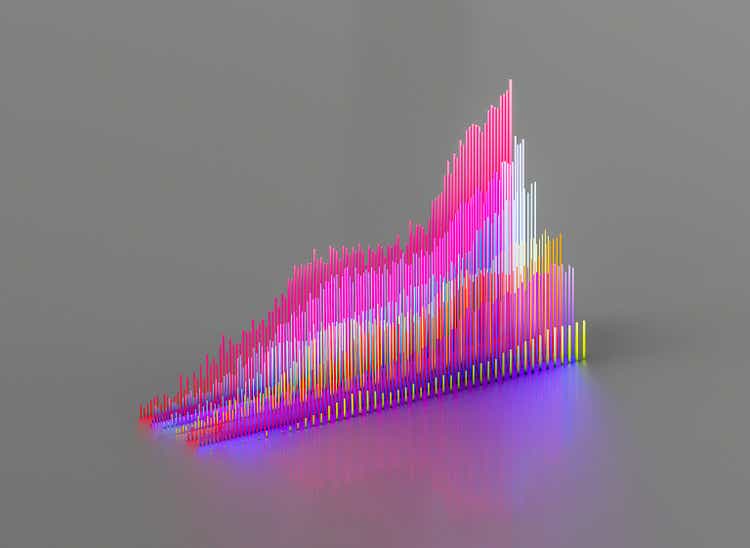 Growth and tech have been two of the best-performing equity sub-segments of the past decade, with both seeing strong capital gains and market-beating returns from the aftermath of the financial crisis until around 2021. Share prices sky-rocketed, but so did valuations.

By late 2021 the situation seemed untenable, with equity valuations at dot-com bubble levels. Valuations seemed unsustainable, and a retrenchment to more normal levels all but inevitable. All that was needed was a catalyst. Rapidly rising interest rates, product of decades-high inflation, became said catalyst, sending stock share prices and valuations down in early 2022, and fast. Growth and tech were hit particularly hard, with the Nasdaq-100 down by almost 30% YTD. More speculative, unprofitable growth names, saw even greater losses, with the ARK Innovation ETF (ARKK) down more than 60% YTD. Even Tesla (TSLA), which seemed impervious to, well, everything for its entire history is down almost 50%.

Growth seemed overvalued in the past, so these declines are understandable, even healthy. Importantly, declines have been severe enough that several growth segments and funds are sporting reasonable valuations, in-line with historical averages, for the first time in decades. The Vanguard Mid-Cap Growth ETF (NYSEARCA:VOT) is one such fund.

VOT offers investors diversified exposure to U.S. mid-cap growth equities, sports a reasonable valuation, and could see strong, market-beating returns from the strong growth rates on its underlying holdings. VOT is a strong investment opportunity, and a buy. With a 0.7% dividend yield, VOT is not an effective income vehicle.

VOT is an equity index ETF investing in U.S. mid-cap growth equities. It tracks the CRSP US Mid Cap Growth Index, an index of these same securities.

The index first selects applicable U.S. equities, subject to a very basic set of inclusion criteria centered. It then ranks these securities by market-cap, with mid-cap equities comprising the bottom 70% – 85%. Sounds a bit complicated, but I think the situation is quite simple to visualize (check the breakevens in the left).

VOT’s underlying index then selects appropriate growth stocks from its pool of mid-cap equities. Simplifying things a bit, we can say that the index selects stocks with above-average results in several key growth factors. These are as follows.

The actual selection process is a bit more complicated, and takes into consideration value factors, complex mathematical formulas, and endeavors to reduce turnover. Although the process is somewhat complicated, it seems reasonable enough, with no significant negatives or drawbacks. In my opinion at least. Finally, securities meeting all criteria and selection processes are included in the index. Weights are based on market-cap.

VOT’s underlying index is quite broad, which results in a reasonably well-diversified fund. VOT invests in over 170 different securities, a reasonably good number, although lower than average relative to broader indexes / index funds. Largest holdings are as follows.

VOT provides investors with diversified exposure to all relevant industry segments as well. Importantly, unlike most growth funds, VOT is not overweight tech, as the fund does not invest in mega-cap tech stocks like Microsoft (MSFT), which tend to dominate most market-cap indexes and funds in which they are included. No Microsoft means smaller, non-tech companies have greater weights, which ensures balanced industry exposures.

In my opinion, VOT’s more balanced industry exposures are neither a positive nor a negative, but they are an important fact that investors need to consider. VOT might be a reasonable investment opportunity for growth investors concerned about tech valuations, but might make less sense for tech bulls.

VOT focuses on U.S. growth equities which should, by definition, have experienced above-average earnings growth rates in the past. This has been the case for the past five years or so, as expected.

In my opinion, VOT should continue to see above-average earnings growth in the future, for three key reasons.

First, is the simple fact that the fund focuses on companies that have grown rapidly in the past, and growth tends to persist into the future.

Second, is the fact that the fund’s industry exposures are quite balanced, which reduces the risk / impact of a slowdown in any one specific industry. A fund with greater tech exposure would almost certainly see reduced growth during the current tech slowdown, but that is not the case for VOT, at least not to the same extent.

Third, is the fact that the fund focuses on mid-cap equities which, almost by definition, have longer growth runways. Large companies can only grow so much before fully saturating their markets. Medium-sized companies can growth much, much more, contingent on gaining market share.

VOT’s strong earnings growth track-record and strong potential growth are significant benefits for the fund and its shareholders, and key to its investment thesis.

VOT focuses on mid-caps, which tend to sport competitive valuations, and does not overweigh tech, which carries the frothiest ones. The result is a fund with a reasonable, although not fantastic, valuation. VOT’s valuation is quite a bit higher than that of its peers on an absolute basis, as expected for a growth fund.

On the other hand, VOT currently trades with a small discount relative to its historical average valuation. Growth has been overvalued for years, but seems to be reasonably valued right now. Large-cap growth still looks expensive, although much less than in the past. Small-cap growth looks extremely cheap, but said segment has been heavily impacted by worsening economic and financial conditions as of late. Valuations will probably be much worse after these issues are fully accounted for.

So, VOT’s valuation is quite a bit higher than average relative to its peers, but slightly lower than its historical average. In my opinion, this qualifies as a reasonable valuation. VOT is not cheap, growth very rarely is, but the fund looks fine at these prices.

In my opinion, VOT’s performance track-record is reasonable enough that it does not significantly alter the fund’s investment thesis. Remember, its future returns that matter for prospective investors, and I do believe that the fund will perform quite well in the future. Significant past underperformance might warrant caution, or might be indicative of issues with a fund’s index, strategy, holdings, or other fundamentals. Slight underperformance is less of an issue, in my opinion at least.