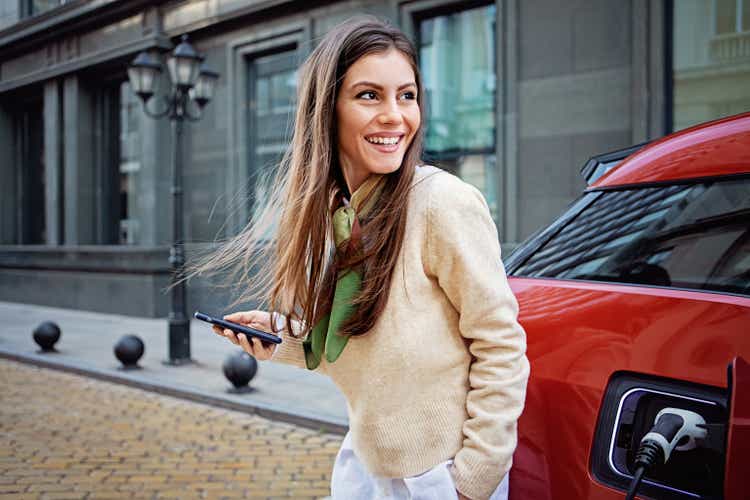 VinFast Auto Ltd. (VFS) has filed to raise an undisclosed amount in an IPO of its ordinary shares, according to an F-1 registration statement.

The firm manufactures electric vehicles for various e-mobility use cases.

VFS seeks to expand into North America and Europe, where the firm has no name recognition and little distribution presence.

I’ll provide an update when we learn more details about the IPO from management.

Management is headed by Global CEO Ms. Le Thi Thu Thuy, who was previously a Vice President at Lehman Brothers in Japan, Thailand and Singapore until 2008.

Management plans to sell its line of electric SUVs in major global markets, including the U.S., Canada and Europe, in addition to Vietnam.

As of September 30, 2022, VinFast has booked fair market value investment of $301 million in equity and $2.5 billion in debt from investors including Vingroup, VIG and Asian Star Trading & Investments Pte. Ltd.

The company plans to target a variety of demographics in major markets through VinFast showrooms.

The firm will provide different modes of purchasing, leasing or subscribing to automobiles or battery technologies.

Selling & Distribution expenses as a percentage of total revenue have increased significantly as revenues have varied, as the figures below indicate:

According to a 2021 market research report by Allied Market Research, the global market for electric or hybrid SUVs was an estimated $35.6 billion in 2020 and is forecasted to reach $252.7 billion by 2030.

Major competitive or other industry participants include:

The company’s recent financial results can be summarized as follows:

Below are relevant financial results derived from the firm’s registration statement:

VinFast intends to raise an undisclosed amount in gross proceeds from an IPO of its ordinary shares, although the figure sought may be in excess of $1 billion.

No existing shareholders have indicated an interest to purchase shares at the IPO price.

Management says it will use the net proceeds from the IPO as follows:

We plan to use the net proceeds of this offering to repay the remaining outstanding Share Acquisition P-Notes issued in connection with the Reorganization, in part or in full, depending on the size of the offering. As of the date of this prospectus, the amount outstanding under the Share Acquisition P-Note held by Vingroup was approximately $1,078.8 million on a consolidated group basis.

investments in research and development of products, services and technology sales

investments in sales and marketing and expansion of sales channels

investments in the development of our manufacturing facilities

the balance for working capital and general corporate purposes, which may include potential strategic investments and acquisitions, although we have not identified any specific investments or acquisition opportunities at this time.

Management’s presentation of the company roadshow is not available.

Regarding outstanding legal proceedings, management says the firm is not currently a party to any material legal or administrative claim.

The listed bookrunners of the IPO are Citigroup, Morgan Stanley, Credit Suisse and other investment banks.

The firm currently plans to pay no dividends and to retain any future earnings for reinvestment back into the firm’s operating and growth initiatives.

VinFast’s trailing twelve-month CapEx Ratio was negative (2.19), which indicates it has spent heavily on capital expenditures despite substantial operating cash use.

The market opportunity for electric SUVs is large and expected to grow substantially in the coming years as more people seek electric vehicles for their various benefits, so the firm has positive industry dynamics in its favor.

However, the company faces significant and growing competition from major automobile manufacturers as the industry plans to introduce numerous models in the near future.

Citigroup is the lead underwriter and there is no performance data on IPOs led by the firm over the last 12-month period.

Risks to the company’s outlook as a public company include its need to create a significant retail presence in major markets and the need for large amounts of expansion capital to do so.

Also, the company has no international name recognition, so generating significant sales growth ex-Asia may be very time-consuming and costly.

When we learn management’s pricing and valuation assumptions, I’ll provide a final opinion.

The rising cost of living isn’t the only reason many in Asia are putting off retirement, Randstad says