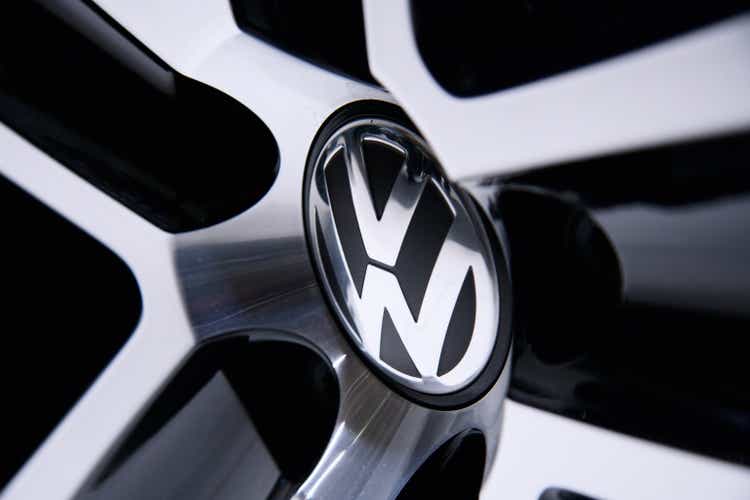 My thesis is that investors need to lower their expectations for Volkswagen’s (OTCPK:VWAGY) (OTCPK:VWAPY) electric efforts from what we’ve seen in the headlines. Volkswagen is increasing deliveries of battery electric vehicles (“BEVs”) in China, but talk of them overtaking Tesla (TSLA) or BYD (OTCPK:BYDDY) in the near future on a global level is unrealistic.

In 2021, about 3/4ths of all BEV sales across all car companies came from China, the US and Germany, so I like to focus on those markets. If we include all of Europe and not just Germany, then we have a substantial majority of global BEV sales covered.

A global unit summary from January to September 2022 puts things in perspective:

The IEA shows that China accounted for 2.7 million of the total 4.7 million global BEV sales in 2021. The October China Passenger Car Association (“CPCA”) New Energy Vehicle Report shows BYD, SAIC-GM-Wuling and Tesla in spots 1, 2 and 3, respectively for the January to October period of 2022. Their growth percentages are 206.2%, 13.4% and 53.9%, respectively, while their market share percentages are 19.9%, 12.3% and 11%, respectively. The SAIC-GM-Wuling numbers are not apples to apples because they are largely comprised of mini vehicles that cost less than $10,000 each:

Again, the top 3 above are as follows:

The English names for the 7 remaining automakers above are as follows:

Volkswagen’s 139.3% growth in China from January to September is impressive, but it lags the January to October growth of BYD, which came in at 206.2%. It also lags the 180.8% growth of Leapmotor and the 145.2% growth of Hozon.

The “New energy” section of the CPCA November Monthly Analysis of the National Passenger Car Market gives us an overview of the latest numbers in China, and we need to keep in mind that this includes both BEVs and plug-in hybrid electric vehicles (“PHEVs”). The top 3 new energy models for November have wholesale numbers as follows:

The CPCA lists the top exports for November as follows:

BYD’s November numbers including PHEVs are impressive per the CPCA:

Subtracting Tesla’s export number of 37,798 from their wholesale number of 100,291 gives us their China domestic November sales number of 62,493. I believe BYD’s split between BEVs and PHEVs is fairly even and if we subtract their combined exports of 12,138 from their combined wholesale figure of 229,942 then we get a combined domestic sales figure of 217,804 units and again this is both BEVs and PHEVs. Volkswagen isn’t mentioned often in this CPCA November analysis, apart from the following:

It is impressive that Volkswagen has increased their nine month 2021 BEV deliveries in China by 139.3% for the first nine months of 2022, but others are growing even faster! Volkswagen has their hands full in this key market given the size and growth of BYD, the size of Tesla and the growth of others like Hozon and Leapmotor.

All Of Europe Including Germany

Meanwhile, Tesla had 83,604 Model Y registrations in Europe in the first nine months of 2022 along with 55,325 Model 3 registrations per InsideEVs.

Germany Is A Key Market For Volkswagen

InsideEVs shows that for the full 12 months of 2021, Tesla sold 39,714 BEVs in Germany while we saw the following Volkswagen BEV sales in that country:

Daily Kanban has more recent YTD numbers for Germany through November, and it looks like things have picked up for Volkswagen Group such that they have 94,005 BEV registrations relative to Tesla’s 52,462:

Looking at the first nine months of 2022 again on a global basis, Volkswagen Group has 366,400 BEV deliveries while BYD has 582,129 BEV units sold and Tesla has 908,573 BEV units delivered. The June 2022 Battery Electric Vehicles Report from Bloomberg Intelligence has a graphic on page 4 which shows Volkswagen selling significantly more BEVs than BYD in 2022. This is absurd seeing as Volkswagen sold 366,400 BEVs in the first nine months of 2022 while BYD sold 394,691 BEVs in just 4 months from August to November per an article from CnEVPost!

In some ways, the timing of this June report from Bloomberg was unfortunate. In late July, it was announced that pro-electric CEO Herbert Diess would be leaving the Volkswagen Group. Veteran Oliver Blume took over as CEO on September 1st and this is a key inflection point. In addition to being wrong about Volkswagen’s 2022 BEV numbers relative to BYD, the June Bloomberg report is also unrealistic about Volkswagen’s prospects with Tesla:

Our scenario analysis suggests VW is on track to become the BEV market leader in 2024, assisted by the launch of 16 new models, including the Audi Q6, A4 e-tron, A6 e-tron, ID 5/6, ID Buzz and Porsche Macan.

The quote above doesn’t make sense given the global numbers we’re seeing from Volkswagen and Tesla. The June Bloomberg report is one factor that has brought about headlines that are incongruent with the real numbers worldwide, including China:

Forward-looking investors should check global BEV numbers themselves instead of relying on headlines. The monthly CPCA numbers are a great resource for this, given the importance of China in the BEV market.

Disclaimer: Any material in this article should not be relied on as a formal investment recommendation. Never buy a stock without doing your own thorough research.