What’s the truth about viral TikTok hacks for clearing colds? 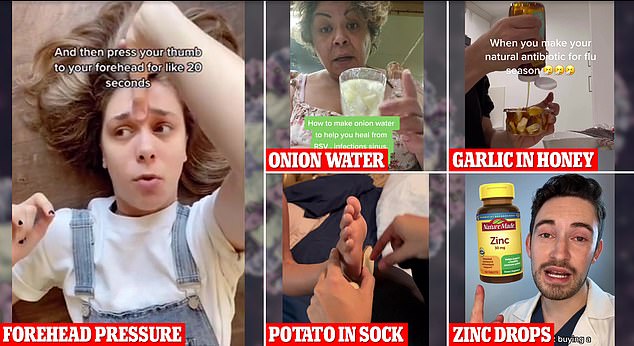 
A slew of bizarre hacks claiming to clear coughs and colds have emerged on TikTok this year.

One involves shoving a potato in your sock, claiming it draws out viruses through the foot.

Pressing a thumb to the forehead has also been suggested to help by distracting people from their symptoms, while drinking onion water has gained popularity due to the belief it eases a sore throat.

The videos have been viewed millions of times, with a single clip on onion water amassing almost 300,000 views in a month.

Doctors told DailyMail.com that while they are not inherently dangerous, there were ‘no convincing scientific’ basis behind the techniques.

Zinc and garlic might have some benefit but the science is inconclusive, so going for some Tylenol and getting some rest is the best course of action.

Pictured above are five of the cough and cold remedies being shared on TikTok at the moment. Doctors have said there is no evidence any of them can ease the infections

They said people were likely getting better naturally as the common cold lasts about five days normally, then attributing it to the hack they used.

The remedies have resurfaced online just as common illnesses like flu and RSV return with a vengeance this winter.

It comes after doctors warned the ‘dangerous’ TikTok trend of taping your mouth shut for weight loss and better sleep could lead to suffocation.

In one clip, viewed by 289,000 people, a mother tells viewers that leaving a slice of raw potato in her son’s sock overnight made his cold go away.

Another shows a teenager confidently tell us that putting pressure on the forehead for 20 seconds can help ease symptoms.

Dr Thomas Moore, a medic at the University of Kansas, told DailyMail.com he ‘applauded’ people’s creativity.

‘All these coughs and colds last about five days, for the typical respiratory virus. It can linger, but generally it clears within five days,’ he said.

‘So when something improves people ascribe it to whatever remedy they chose and start to swear by it.’

‘For example, I was actually talking about this to one of our pharmacists the other day whose parents are healthcare workers in Switzerland and have science degrees.

‘She says her mother still swears by putting onions in her socks to help ease her symptoms, while her older relatives still recommend an old remedy of giving sick kids a shot of whisky and a heavy blanket.’

America’s leading health officials are now recommending masking to prevent the spread of RSV and the flu this winter — not just Covid.

Dr Rochelle Walensky, director of the Centers for Disease Control and Prevention (CDC) said during a briefing Monday, ‘we also encourage you to wear a high-quality, well-fitting mask to prevent the spread of respiratory illnesses’, when discussing prevention measures for the flu and respiratory syncytial virus (RSV).

It comes as nearly every state in America is recording ‘very high’ levels of flu as the US is slammed by a lockdown-fueled resurgence of respiratory viruses this fall.

The CDC reports 9million flu infections and 4,500 deaths caused by the virus this flu season – with the worst expected to arrive in the coming weeks. Typical flu season runs from October to May each year.

But for the two that have been studied — zinc and garlic treatments — the few papers available were inconclusive.

Lab studies suggest that zinc can stop rhinoviruses — one of the viruses that causes the common cold — from invading cells.

A few papers found that people who took zinc supplements had the length of their infections shortened by a few days.

But Dr Pritish Tosh, a medic at the Mayo Clinic, said: ‘Taken all together, research shows mixed results for zinc and colds. For that reason, zinc can’t be recommended to shorten your cold symptoms.’

Garlic is known to be packed with sulfur compounds, such as allicins, which can help kill bacteria — but not viruses.

But very few studies have looked into its ability to fight off the cold.

A 2020 meta-analysis found only one paper it could review, which said out of 146 people those who took garlic every day for three months had fewer colds.

Its results need to be backed up by more rigorous research.

Dr Moore added: ‘Potatoes in the sock, that’s certainly imaginative. I don’t understand the rationale for that one.

‘Pressing your thumb in the center of your forehead, that will distract you, it will give you something else to focus on so you don’t feel too lousy.

‘Garlic in honey, I have to say that in Germany pharmacies will prescribe certain teas for respiratory conditions — many of which have garlic or honey for people to drink.

‘Does it work? Probably not. But it is supportive care that makes people feel better and as though they are doing something.

‘In terms of scientific data, there are no convincing scientific papers that say these work, but if it makes you feel better that is what these remedies are all about.’

Doctors add that regardless of whether the remedies work they are all safe to use and do not pose a risk to health — unless someone has an allergy.

Many of the remedies have been around for centuries and date back to medieval times.

They have been thrust back into the spotlight amid a resurgence of coughs and colds.