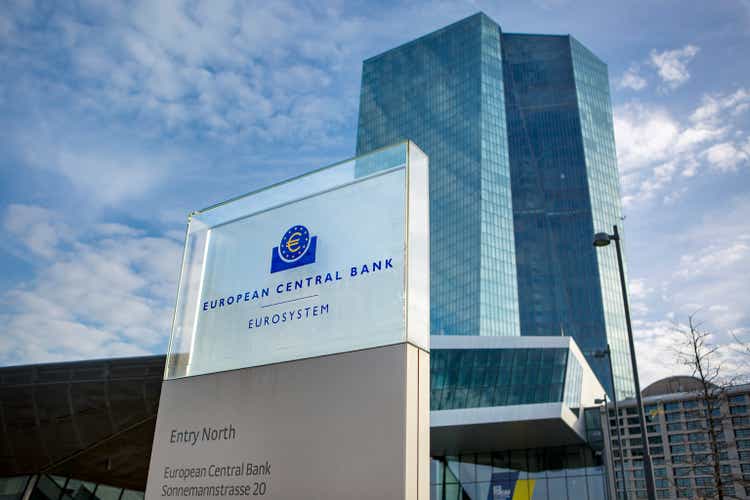 Half of the G10 central banks meet in the week ahead. The Fed is first on December 14, and the ECB, BOE, Swiss National Bank, and Norway’s Norges Bank meet the following day. Before turning a thumbnail sketch of the central banks, let us look at the November US CPI, which will be reported as the Fed’s two-day meeting gets underway on December 13.

The terms of the debate have shifted. It is no longer about when US inflation will peak but how fast it will come down. Consider that US CPI rose at an annualized rate of more than 10% in Q1 and Q2. It has slowed to about 3.6% in the past three months. The year-over-year rate peaked in June at 9.1%. It has slowed to 7.7% from a year ago in October. In November, it is expected (median of Bloomberg’s survey) to have slowed to 7.3%, which would be the lowest of the year.

The core rate is of critical interest. Not because volatile food and energy are excluded or that food and energy have been historically driven by supply issues rather than demand, but because, over time, the headline rate gravitates to the core rate, not the other way around. The core rate is the signal, and the headline is noisy. Core CPI rose at an annualized rate of about 5.6% in Q1 and accelerated to 7.6% in Q2. Over the last three months, it has risen around 6% at an annualized rate. The year-over-year rate may have peaked in September at 6.6%. It slowed to 6.3% in October and is expected to ease to 6.0% last month. The low for the year was set in June and July at 5.9%.

Federal Reserve: The market is confident that the Fed will hike by 50 bp after four 75 bp moves. Although analysts and many in the media seem to like drama and have played up the growing divergence between hawks and doves at the Fed, we suspect this is an exaggeration. There is unlikely to be a single dissent from the half-point move. The more significant divergence is between the market and Fed signals about late next year. The Fed has said to ensure that price stability is achieved, it envisions holding rates at a high level for some time after it is finished hiking. The market has been leaning toward a cut in Q4 23 since the end of September. The implied yield of the December 2023 Fed funds futures contract has been 25 bp or more since November 10 (US CPI release?). While there has been some variation, the June 2023 Fed funds contract has gravitated around a 5% implied yield since late October. The five- and 20-day moving averages have converged slightly below there. The Fed will update its economic projections, and Chair Powell has already intimated that the view of the terminal rate will likely be revised higher from the 4.6% projected in September. Anything lower than 5% in the market will be seen as dovish, and the Fed does not want to signal that. Recall that at the end of last year, the median dot was 0.9% at the end of this year, 1.6% at the end of 2023, and 2.1% in 2024. In September, the median forecast was 4.4% end of this year, 4.6% at the end of next year, and 3.9% at the end of 2024.

European Central Bank: The market has gradually become more comfortable with the idea that the ECB will slow its pace of tightening to 50 bp on December 15 after two 75 bp moves. A half-of-a-point move would lift the deposit rate to 2.0%. The swaps market sees a terminal rate of around 2.75%, with about a 1-in-5 chance of 3.0%. Some suggest that with the US policy rate staying well above Europe’s, the dollar cannot fall far. However, that might be misleading. What matters most of the time is not the level per se but marginal change and direction. Look at the one-year swaps. The dollar rate is seen at 4.70 after peaking near 5%. The euro rate is seen at 2.88%. The market looks for the Fed to cut before the ECB. Meanwhile, banks will repay almost 450 bln euros of the Targeted Long-Term Refinancing Operations (three-year loans) this month. That likely means that any discussion of QT likely will not have an immediate effect. ECB President Lagarde had suggested it could begin after the ECB’s hiking is completed. Although it might be eventually brought forward, it is unlikely to start in Q1 23. The ECB owns around 5 trillion euros of bonds. Also, the ECB staff will update its forecasts. The rise of the euro and decline in oil prices may justify adjusting its inflation forecast for next year. In September, it forecasted a 5.5% CPI in 2023 and 2.3% in 2024. It will also extend its projections to 2025. The market (median in Bloomberg’s survey) is 6.0% and 2.1% for 2023 and 2024, respectively. Like other central banks, the ECB is loath to forecast a recession. The staff forecast 0.9% growth next year and 1.9% in 2024. The market is less sanguine. It has a 0.1% contraction next year and 1.5% growth in 2024.

Bank of England: Like the Federal Reserve and the European Central Bank, the Bank of England is expected to lift its base rate by 50 bp to 3.50%. The swaps market has about a 90% chance of a half-point move discounted. Recall that consumer prices accelerated to a new cyclical highs in October (11.1%), with the core rate was at the cyclical high of 6.5% for the second month. However, there are a couple of mitigating factors. Meanwhile, the economy appears to have already entered the projected recession with a contraction in Q3. The Bank of England sees inflation peaking shortly and falling to 5.3% next year and 1.5% in 2024. The market (median forecast in Bloomberg’s survey) is not quite as sanguine. It sees inflation easing slightly below 7% next year and to 2.6% in 2024. Sterling has surged from the record low near $1.0350 in late September. It reached $1.2345 last week. Since September 26, sterling has rallied 14.7% against the dollar and 5% against the euro. On a trade-weighted basis, sterling has appreciated by nearly 11%.

Swiss National Bank: The SNB hiked by 50 bp in June and 75 bp in September. The policy rate stands at a lowly 50 bp. The Swiss CPI has been well-behaved. The EU-harmonized rate was 2.9% in November, and the core was 1.9%. The Swiss franc has performed best against the dollar this year, falling about 3%. The euro, in contrast, is off about 7.75%. However, here in Q4, the Swiss franc has underperformed, rising by about 4.8%, only more than the Australian and Canadian dollars. Meanwhile, Swiss sight deposits continue to implode. They peaked in September near CHF755 bln and now are at CHF550 bln, which brings them back to Q1 17 levels. It is not clear that a 50 bp hike by the SNB will do much for the critical euro-Swiss cross. The euro had fallen to seven-year lows against the franc in September (~CHF0.9400) and recovered in October (~CHF0.9955) but has since traded broadly sideways. The fact that the Italian premium over Germany has fallen sharply since the new government took place, contrary to the doomsday calls, may have denied the franc some fuel. Italy’s two-year premium had dropped from around 132 bp in late September to less than 50 bp, the lowest in five months. The 10-year premium peaked at almost 253 bp and is consolidating after approaching 180 bp, a seven-month low.

Norges Bank: Norway’s central bank began its normalization cycle in September 2021 with a 25 bp increase. It lifted the key rate two more times through March 2022 by a quarter of a point before accelerating to 50 bp in June, August, and September. It downshifted back to 25 bp last month, which lifted the policy rate to 2.50%. The swaps market says this is the peak. With 7% CPI (and a 6% underlying rate, which excludes energy and adjusts for tax changes), there is scope for additional hikes. We look for a 25 bp hike this week. Although many talk about the krone as a petrocurrency, and the 60-day rolling correlation between changes in the exchange rate and Brent is at its best for the year, around 0.59. However, the correlation between changes in the exchange rate and the US two-year yield is at 0.63, its highest since 2003. The correlation between changes in the euro-Nokkie cross and the S&P 500 (risk appetite proxy) and Brent are also identical, a little below 0.60.

There are also a few emerging market central bank meetings in the week ahead, but the one that may capture the most attention is Mexico. Mexico’s headline inflation may have peaked in August and September at 8.70%. It fell to 8.41% in October and to 7.80% in November, the lowest since July. Mexico’s target rate sits at 10.00%. The swaps market sees a peak near 10.75% but also is pricing in a cut in late 2023. Indeed, by the end of next year, the swaps market is pricing in a roughly 9.50% rate.

The peso sold off sharply for two sessions recently. The dollar jumped from around MXN19.11 to MXN19.8640 from Friday, December 2, to Monday, December 5. There does not appear to be a significant domestic development behind it, and we attribute it largely to market positioning and the use of the peso as the long end of cross positions. As the short end of the crosses strengthened, like the yen and euro, and key technical levels were violated, money management led to an unwinding. We suspect this is allowing the reset of some positions. However, the same fundamentals are in place, including the implied volatility of the peso. The peso’s three-month implied vol is about 12.0%. That is compared to around 20.4% for the Brazilian real, which offers higher rates than Mexico. Perhaps, under-appreciated, the peso’s implied vol is lower than the Scandis and Antipodean currencies, and is around the yen’s level.

Lastly, an event not on many economic calendars is that by the end of next week (December 16), Congress needs to authorize more spending or risk a partial government shutdown. This almost seems like an annual ritual, a macabre dance, if you will, where the two political parties use the spending authorization to seek domestic political advantage. The switch to a Republican-majority House of Representatives next year makes many in the party reluctant to agree to much now, and in any event, an agreement, if all the Democrats in the Senate support it, which may be a stretch, would still require ten Republican Senators. The brinkmanship tactics that both employ requires going to the brink, which is often scary. A larger drama will likely play out next year when the borrowing limit is reached. While the failure to lift the spending authorization could lead to partial government closure, which seems absurd to many, the failure to boost the borrowing limit leads to default. In the past, the brinkmanship itself was a cause of concern for the major rating agencies.