5 takeaways from the Chicago Blackhawks’ 3-1 loss to the Winnipeg Jets, including Jarred Tinordi taking one on the chin 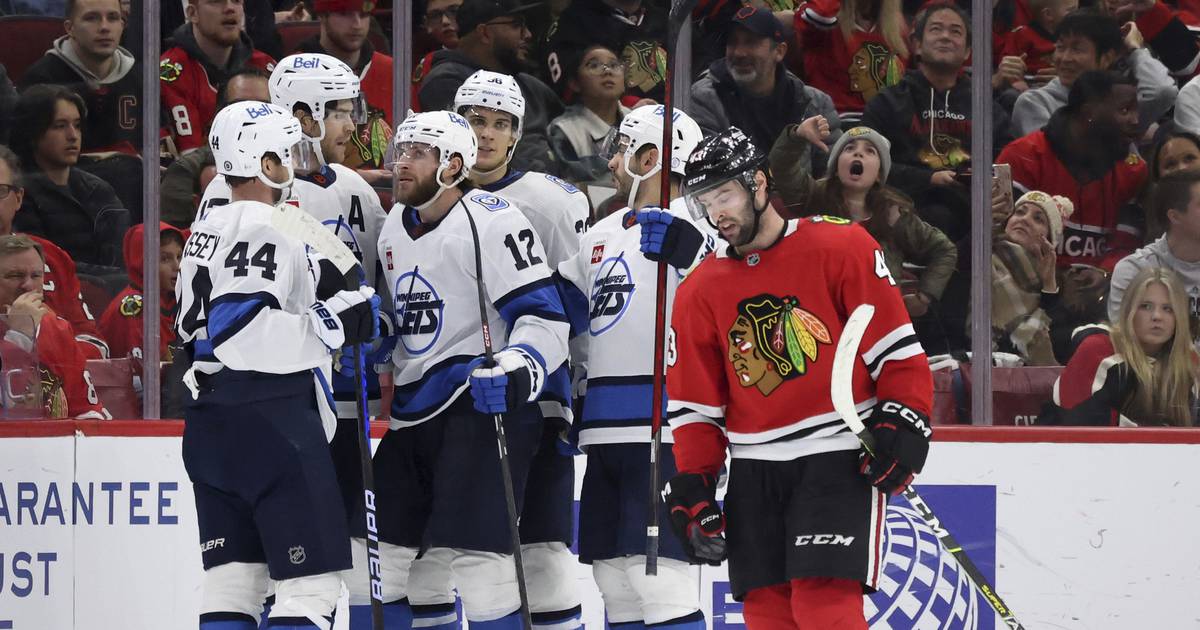 
Chicago Blackhaws coach Luke Richardson was talking about a fight sparking some energy when referring to the Winnipeg Jets as “a team that has been in our kitchen a little bit this year.”

The Hawks lost 4-0 in the first meeting Nov. 5, 7-2 on Nov. 26 and looked like they were emerging out of cold storage in the first period of Friday’s 3-1 defeat at the United Center.

“Definitely the first period was not what we talked about for a couple days here,” Richardson said. “We wanted to get out fast against a team that played last night and lost (defenseman Logan Stanley) in the first period, down to five D. I know we were, too, but we got one back.

“And (we wanted to) make it difficult for guys like (Josh) Morrissey and those guys and we really didn’t. We didn’t touch anybody all night until maybe a little bit in the second period and in the third period with some desperation. But when you’re playing from behind, it’s definitely taxing and we’ve done it way too much as of late.”

Richardson called Morrissey a “smart” player twice before the game against the Jets, and the Hawks were smarting after the loss.

Then during a second-period power play, Morrissey ripped a shot down the middle that Blake Wheeler deflected in 56 seconds after the intermission.

Taylor Raddysh answered later in the second for the Hawks’ only goal.

In the third, it was Jansen Harkins’ turn for some razzle dazzle. He came around the back of the net and looked at Morgan Barron as if he were going to tee him up at the net but instead snuck a pass to Adam Lowry, who wristed in the capper.

“It wasn’t all bad,” Hawks defenseman Seth Jones said. “I thought we came out slow in the first though. We weren’t very physical, we weren’t forechecking very much and they took it to us a little bit.

“I thought in the second period we started to get more O-zone time, moving our feet in and out of checks and forechecking, making things happen offensively and you saw it by the way we played.

“They got one power-play goal and we couldn’t get ours going.”

The Hawks went 0-for-3 on the man advantage.

On the first goal, Morrissey cut off Philipp Kurashev at the blue line and fed Perfetti, who caught Ian Mitchell in an awkward defensive posture and wristed the opening goal past Arvid Söderblom.

Richardson doesn’t bear the look of the disappointed dad very often — choosing to be the uncle who says, “Eh, it’s not so bad” — but he did after several examples of poor puck management.

“Yeah, that’s just Kurashev in the red zone not getting it out,” Richardson said of the Perfetti goal. “And I talked to them after the period. Kaner (Patrick Kane) did same the thing on the other side. And in the third period a couple of times, at their blue line, (Max) Domi and (Colin) Blackwell, we just need to lay pucks behind them. They’re a stubborn team, they play hard on both blue lines.

It’s probably particularly galling because Richardson emphasized that point during a video session.

“We can’t be surprised when Morrissey is going to step up at either blue line and keep the puck in, because that’s what they do and they do it very well,” Richardson said. “And when they do it, then you’re usually outnumbered or outmanned or scrambling, which is what happened. Kurashev has just got to know where he is.”

He acknowledged that it’s difficult as a left winger for Kurashev to break the puck out from the right wall, but he won’t accept that as an excuse.

“You’ve got to get the puck out of there,” Richardson said. “It’s a no-exception zone right there, it’s an automatic, it’s got to be out.”

The sequence started with the Jets’ Neal Pionk trying to rim the puck out of the defensive zone, but Kurashev cut it off at the point and sent it to the slot.

Axel Jonsson-Fjällby tried to settle the puck, but Raddysh picked his pocket from behind and whipped it past David Rittich.

“It was just a really good play by Kurashev, keeping the puck in,” Raddysh said. “I don’t know if he was trying to change or be a high three for the D, but he made a good play there and just kind of threw it on net, and we got a lucky bounce there stripping one of the forwards and kind of squeaked through the hole there.”

It was Raddysh’s first goal since Saturday against the New York Rangers.

Richardson noted that Raddysh’s goal looked similar to one he had against the Jets on Nov. 27, which also was assisted by Kurashev.

“It was just an offensive zone rotation, hard on the puck,” Richardson said. “So Kurashev did a good job — give credit where he deserves it, he kept it in, very similar to where he lost it (on the Perfetti goal).

“But we don’t want to be an even team. We want to learn and be a plus team in every area. Kurashev and Raddysh have had a good kind of working relationship. … They seem to have a little bit of chemistry and find each other.

Meanwhile, Raddysh has four goals in seven games since Nov. 25.

“Raddysh, to his credit, has really played hard this year, he’s been harder on a stick as of late and he’s getting rewarded,” Richardson said. “That’s got to be infectious through our whole team.”

The Hawks defenseman returned to the ice after a five-game absence (hip) and was initially paired with Connor Murphy.

But during the first shift, Tinordi took a skate to the face while fighting for the puck with Michael Eyssimont.

“He was open wide, wide open there on the bottom, right across the chin,” Richardson said. “So it took extensive time to sew him back up, probably, I would think, layers.

“But I think he’s doing fine, but I think with those kinds of cuts you can always worry about infection, especially with a skate blade that’s on the ice, and you know with sweat and spit and everything on the ice is dirty.

“So I was just checking on him now and everything seems to be fine, but hopefully it’ll be OK tomorrow.”

Said Jones after the game: “Honestly, I still didn’t even know what happened. I don’t know if he got a skate or stick, I haven’t seen it.

“He’s such a warrior, a tough guy that when he comes back he gives us a boost and I think you saw that in the second period when he came back to the bench.”

Tinordi returned three minutes into the second wearing a lower face shield and played throughout the period. He played just less than 11 minutes, including two minutes of penalty kill.

But initially he wasn’t supposed to play at all.

After the morning skate, Caleb Jones reported tightness in his hip to Hawks trainers “locking up on him,” Richardson said.

During warmups, “I talked to Tinordi and Tinner said, ‘I’m ready to go.’”

The Hawks have noted how Kurashev has generated several scoring chances or been on the receiving end of them, but in either case they’re not usually turned into goals.

“A lot of times this year we’ve been fast enough, a lot of good shot shot opportunities where we try to get even a better shot, but sometimes you’ve just got to get it on net and you never know if it goes in or maybe there’s going to be a rebound for someone and I think that’s how we have to do it. We have to be more simple just putting pucks to the net and try to get to those little areas where the loose pucks are going to be.”

Rebound attempts are one indicator of second chances, and Kurashev’s line with Jonathan Toews and Raddysh and his line with Sam Lafferty and Jason Dickinson have accounted for the team’s second and third most rebound attempts in five-on-five, respectively, entering Friday’s matchup, according to naturalstattrick.com.

Added Kurashev: “We’ve got to have better traffic around the net and just beating those other team’s (defensemen) to those rebounds and try to put them in. I feel like a lot of times we are making good plays and just maybe one step a little bit too late, or something bounces over the stick or something. So if we focus more on that, I think it’s going to be good.”

Richardson had similar thoughts about it coming down to puck bounces.

“There’s been chances like last game, Domi shot a puck on a two-on-one and the puck bounced right over his stick for the second chance,” Richardson said. “Then I think Kurashev had one on the power play in the third period when the rebound came out in the middle and bounced over his stick. A little bit of tough luck, but you have to make your own luck too.

Richardson pointed to Tampa Bay Lightning forward Corey Perry’s no-hesitation flip-in against the Nashville Predators on the power play during Thursday’s 5-2 win as exactly the kind of plays the Hawks need to make.

“It’s bouncing but he’s that guy who will stop that puck and put it in,” Richardson said. “We have to get a little more determined at that and around the net a little harder. …

“We’re feeling it, we’re going to the crease and we’re getting the second chances of putting them away. Just (need) a little more consistency at it.”

Lafferty took the ice for the first time since Nov. 23 after missing six games.

“Definitely feeling a lot better and just excited to be back,” Lafferty said. “It’s been awhile, so just want to bring a ton of energy tonight.”

He joined a line with Blackwell at left wing and Reese Johnson on the right.

Lafferty said despite a slump, he saw a lot good things during his absence, just a lack of consistency.