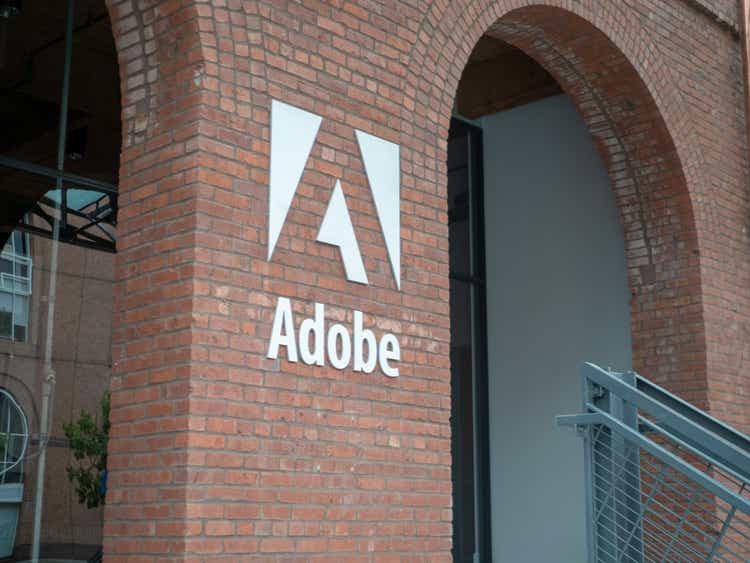 
Software stocks have been awful this year. Of course, software is not alone in that by any means, as just about anything that is reliant upon growth expectations and/or low interest rates has been decimated. After all, we’ve been in a bear market, and that’s the sort of thing that happens.

However, while bear markets are painful, they also create outstanding buying chances in great companies. One company that I’ve maintained is great is Adobe (NASDAQ:ADBE), a perennial leader in the software space. The company has built a lucrative recurring revenue flywheel that spins off billions of dollars of cash every year, and Adobe has been around a long time, surviving multiple periods of economic harshness.

Earnings, as you can see, are due out on Thursday after the bell, with adjusted EPS of $3.50 and revenue of $4.53 billion expected. Critically, there have been 26 EPS revisions in the past three months, and 24 of them have been higher. Typically during periods of weakness, we’ll see analysts cut too far to the downside, before an upward revision cycle begins. Are we in the midst of that with Adobe? Only time will tell, but it is certainly looking good. Adobe has a history of beating revenue expectations, and current estimates are almost exactly what the company guided for back in September.

The last time I covered Adobe, I noted a bullish bottoming formation that was in play. The stock did bounce slightly after that, but ultimately broke down in the spring of 2022 along with just about everything else. That’s exactly why I tell subscribers with literally any trade that it’s critical to have stop levels in place. That eliminates the risk of being a bag holder and waiting years to get your cost basis back. Sometimes setups don’t work out, but as long as you remain disciplined, that’s okay.

Let’s take a look now at the setup for Adobe headed into earnings.

Is this time different?

That, of course, is the big question. I will say it looks like Adobe is in the midst of a bottoming formation once more. Before you roll your eyes, hear me out, and remember that technical analysis is about probabilities, not certainties.

On the price chart there are two things I want to point out. First, that big blue line is the primary downtrend that has been in play since the top in late-2021. That line is currently at ~$370 but declining rapidly. Given where the share price is, there’s likely to be a showdown sooner than later, and the earnings report could be the catalyst for that. If we get a break of that line, that’s very bullish. If the stock is rejected off of it again, the bottoming formation is likely not in play this time around, either.

The other point on the price chart I want to make is two levels of price resistance that are overhead. First up is $350, which is the double top the stock made in November. That’s likely to prove a formidable obstacle for the bulls. Second, $370 is not only where the downtrend line is today, but it’s also gap resistance from the September earnings report.

These levels are likely to provide at least some resistance, but if we do get a breakout over $370 in particular, look out above.

On the plus side, the PPO is well into positive territory after spending a lot of 2022 under the centerline. The 14-day RSI has also been bouncing off the centerline, which is another good sign for momentum. Stocks that are bottoming or are in new uptrends don’t become oversold, so the fact that Adobe is holding that centerline is a very good sign.

Finally, I’ve noted in the bottom two panels the outperformance Adobe has seen in the past few weeks. The first panel is the stock’s performance against its peers, and the second is the peer group against the S&P 500. Adobe has beaten its competitors by 16% since October began, and the group has beaten the broader market by 5%. Thus, we have an outperforming stock in an outperforming group; sign me up.

Obviously, the big news of September, besides the earnings report, was Adobe’s massive planned acquisition of Figma, which is a competitor of Adobe at the moment. Adobe is set to pay $20 billion for Figma, with cash and stock each making up half of that princely sum. That’s a lot of money where I come from, so what is Adobe getting?

For one thing, Figma is expected to add $400 million in total annual recurring revenue to Adobe based on 2022 estimates. Figma also apparently has net dollar retention of at least 150%, according to the press release. Finally, the company has gross margins of 90% and positive operating cash flows, so from a financial perspective, it seems to fit the bill with Adobe’s existing profile.

Adobe is also taking a page out of the if-you-can’t-beat-them-join-them playbook, adding a high growth, high margin business, but also eliminating a capable competitor. We’ve seen this playbook from tech companies countless times and it works.

We’ll have to see if the acquisition is approved by regulators, and if so, how it goes. Assuming it is approved, this transaction looks expensive. However, I have to trust there are plans to grow the Figma portfolio to account for the $20 billion the company is spending on it, including whether eliminating the competitive threat of Figma is saving Adobe from losing business over time. In addition, if the acquisition is rejected, it is my belief Adobe could see a sizable relief rally given the market hated the news back in September.

The good news is that Adobe has plenty of ability to pay for this acquisition, so it’s not like there’s a huge amount of leverage coming.

Trailing-twelve-months free cash flow is $7+ billion, and net debt is -$1.1 billion, so Adobe can quite easily afford this. In addition, it shouldn’t take long to replace the cash used, particularly if Figma is adding cash in addition to Adobe’s existing business.

Perhaps more important than anything else, the market has had three months to digest the Figma news, and the stock has already moved materially higher off the lows. That means it’s not an overhang for the stock heading into the Q4 report.

Heading into the report, expectations are much lower than they were a year ago.

What’s interesting is that while the overwhelming majority of revisions in the past three months to EPS have been higher, exactly the opposite is true of revenue. Twenty-five of 27 revisions to revenue have been lower, so there’s a lot of negativity already built into the share price, as far as I can tell.

EPS revisions are on the rise, but as we can see, only just. The out years are well off their highs, but again, that means there’s a lot of bad news already accounted for. Could it get worse? Absolutely. I’m just not willing to be that with all this negativity that we’re going to see material cuts from these levels.

Valuations of anything and everything related to growth stocks have been decimated this year. That includes Adobe, but as I said earlier, that creates opportunity. Let’s start with price-to-sales, which we can see for three years below.

The average valuation for this period is 14X times, with the peak at 19X, and the nadir at 7X. The latter was hit only a couple of months ago, and keep in mind that even after a big rally, Adobe is trading for a ~20% discount to its COVID low valuation. Is Adobe 20% worse off than it was at the worst of the pandemic selling? That’s a tough one for me to reconcile.

If we look at forward P/E, we get a similar story.

The top was 52X forward earnings, while the bottom hit in September was 18X. That’s a big range but at 22X today, it’s once again quite difficult to argue there’s substantial downside from a valuation perspective. If anything, reversion to the mean argues that Adobe shares should be off and running in 2023.

The bottom line heading into any earnings report is that 1) we don’t know what any company will say and 2) we don’t know how the market will react to whatever is said. That’s true with Adobe as well, but given the setup in the stock, the fundamental picture, the fact that Figma is already digested, and the valuation, I cannot help but think the bias is up when the company reports on Thursday. We’ll see, but if I’m wrong and we get a selloff, unless the company gives some horrendous fundamental update, that will almost certainly be a great buying chance on a perennial top performer.