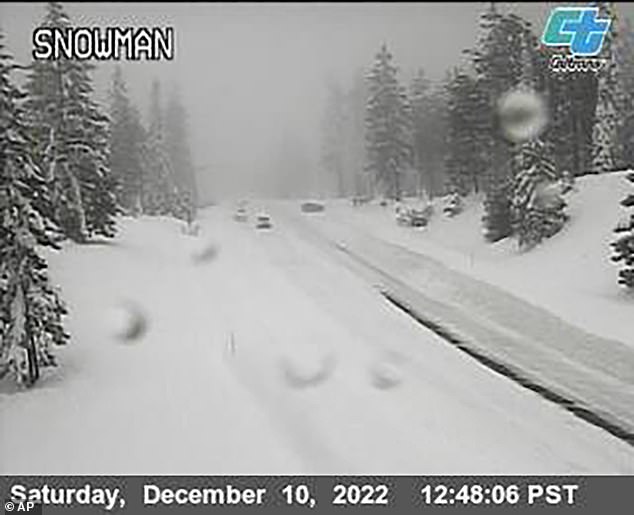 
A winter storm packing powerful winds aided by what’s being termed an ‘atmospheric river’ is bringing heavy rain and several feet of snow in the Sierra Nevada has shut down mountain highways, toppled trees and triggered flood and avalanche warnings on Saturday from the coast of Northern California to Lake Tahoe.

More than 250 miles of the Sierra remained under a winter storm warning at least until early Monday from north of Reno to south of Yosemite National Park.

As much as 4 feet of snow is expected to fall by the end of the weekend in the upper elevations around Lake Tahoe, and as much as 6 feet in more remote parts of the Sierra to the north and south.

A 70-mile stretch of eastbound U.S. Interstate 80 was closed ‘due to zero visibility’ from Colfax, California to the Nevada state line, transportation officials said while tire chains were required on much of the rest of I-80 in the mountains from Reno toward Sacramento.

An ‘atmospheric river’ is a plume of moisture which comes in off the Pacific Ocean and is similar to a fire hose as it fires moisture into one specific area for an extended period of time leading to heavy rain or snow, explained CNN.

A stretch of California Highway 89 was closed due to heavy snow between Tahoe City and South Lake Tahoe, California, the highway patrol said. Interstate 80 between Reno and Sacramento remained open but chains were required on tires for most vehicles

Winds in the Sierra Nevada could exceed 100 mph. Pictured, Heavenly Ski resort which saw ski lifts blowing around in the wind

A stretch of California Highway 89 also was closed due to heavy snow between Tahoe City and South Lake Tahoe, California, the highway patrol stated.

The U.S. Forest Service issued an avalanche warning for the backcountry in the mountains west of Lake Tahoe where it said ‘several feet of new snow and strong winds will result in dangerous avalanche conditions.’

Gusts of wind up to 50 mph sent trees into homes in Sonoma County on Saturday but they could reach 100 mph over the Sierra ridgetops by early Sunday, the National Weather Service said.

Heavy rain was forecast through the weekend from San Francisco to the Sierra crest with up to 2 inches in the Bay Area and up to 5 inches at Grass Valley northeast of Sacramento.

The weather service issued a flash flood warning on Saturday when inches of rain fell on burn scars left by wildfires south of Monterey and farther south of Big Sur.

Heavy rain and wind are forecast this weekend in Northern California. Travel in the Sierra is becoming dangerous due to whiteout conditions

A​ major winter storm will blanket California and the West throughout the weekend, then become a Northern Plains blizzard,

then could dump significant snow in parts of the Northeast later next week.

A powerful, southward plunge of the jet stream will move eastward across the country this weekend into the middle of next week

More than 30,000 customers were without power in the Sacramento area at one point Saturday morning, but it was restored to all but a few hundred late in the day. The drivers and passengers of five cars that had been trapped between downed power lines escaped unharmed, the Sacramento Bee reported.

San Francisco Bay Area officials reported power outages and fallen trees, some of which damaged cars and homes. In Monte Rio, a small town along the Russian River in Sonoma County, firefighters responded to several reports of downed trees crashing into homes in 50 mph wind gusts.

Monte Rio Fire Department Chief Steve Baxman told KRON-TV that four different down trees had damaged houses in the area and that no injuries were reported.

‘This is our first big storm, we’ve had several years of drought and all these trees were dry. Now they’re filling up with water and starting to topple over,’ Baxman told the television station.

Heavy rain and wind are forecast this weekend in Northern California. Travel in the Sierra is becoming dangerous due to whiteout conditions and is highly discouraged.

In the Sierra, about 10 inches of snow already had fallen by Saturday evening Mammoth Mountain ski resort south of Yosemite where more than 10 feet (3 meters) of snow has been recorded since early November.

‘It just seems like every week or so, another major storm rolls in,’ resort spokeswoman Lauren Burke said.

On the Sierra’s eastern slope, a winter weather advisory in in effect from 10pm on Saturday night until 10am Sunday morning for Reno, Sparks and Carson City, with snow accumulations of 1 to 3 inches on valley floors and up to 8 inches above 5,000 feet.

That advisory reminds motorists never to drive through floodwaters. The bad conditions are expected to last until Monday.

Winds are expected to be strong enough to break off tree limbs.

The NWS said that the area is ‘extremely dangerous’ to travel in with the snow reducing visibility with near whiteout conditions reported.

The US Forest Service has been on avalanche watch in the area since Friday, with the danger of a landslide high on Saturday thru until Sunday.

A 250-mile stretch of the Sierra from north of Reno to south of Yosemite National Park was under a winter storm warning at least until Sunday.

The Mammoth Mountain ski resort was reporting 10 inches of snow  this weekend. Resort spokeswoman Laura Burke said: ‘It just seems like every week or so, another major storm rolls in.’

The Forest Service Sierra Avalanche Center said in a statement: ‘A winter storm with gale force winds, high intensity snowfall and feet of new snow accumulation may result in widespread avalanche activity in the mountains.’

The statement continued: ‘Triggering avalanches would be easy on steep slopes in exposed and sheltered areas where new snow rests on top of weak snow or where wind-drifted snow exists near ridges.’

A stretch of California Highway 89 was closed due to heavy snow between Tahoe City and South Lake Tahoe, California, the highway patrol said.

Interstate 80 between Reno and Sacramento remained open but chains were required on tires for most vehicles.

On the Sierra’s eastern slope, a winter weather advisory runs from 10 p.m. Saturday to 10 a.m. for Reno, Sparks and Carson City, with snow accumulations of 1 to 3 inches on valley floors and up to 8 inches  ) above 5,000 feet.

Other mountain ranges in the West Coast will see one to three feet of snow, the NWS has said. The agency also said: ‘Confidence was unusually high for strong winds and significant snows to produce hazardous impacts’ in the central plains. Adverse weather is expected to impact Colorado through Wisconsin next week.

The state of California has recently been experiencing drought conditions so the increased rainfall will offer some relief, according to the national Draught Monitor.

Coastal erosion and flooded roadways are the primary concern.

Though the rainfall is still likely to produce hazardous conditions for many residents of the state.

The storm will move east starting Monday, hitting Colorado and Wisconsin before reaching Florida by Friday

Roger Gass, a meteorologist with the NWS, told KRON: ‘We do have a cold coming in from the north later this evening with rain beginning to develop up in the North Bay late tonight. In addition, southerly winds will begin to increase ahead of this cold front with wind gusts potentially in excess of 45 mph.’

He added: ‘It’s going to eventually make it down to the Central Coast and the Monterey Bay region by the time we move into Saturday afternoon with lingering showers and thunderstorms possible through Sunday.’

CNN Meteorologist Chad Myers said: ‘As the system moves into the Plains early next week, a springlike storm system develops. Significant severe weather will occur in the warm air across the South and a major snow and ice event will happen in the western Great Lakes and northern Plains.’

Elsewhere, severe storms will also be seen in the Southeast and Lower Mississippi Valley this week.

Matthew Elliot with the Storm Prediction Center told CNN: ‘While tornadoes in December are relatively uncommon when compared to the springtime, they are often more likely across portions of the Southeast and Lower Mississippi Valley, where there is often a secondary peak in the fall and winter.’

As of Wednesday, the storm will have moved towards New Orleans and Florida.