‘Brutal – this England exit is even more painful’ 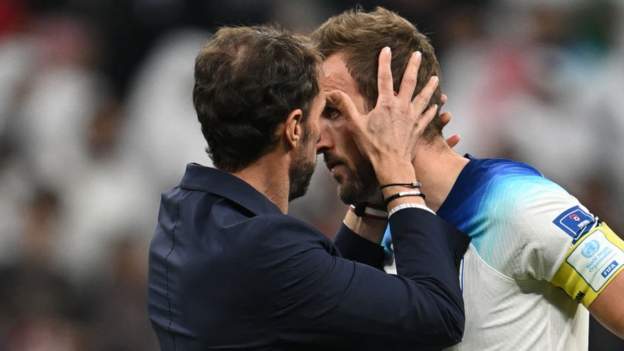 
England manager Gareth Southgate and his players nursed a familiar sense of missed opportunity as that elusive major tournament triumph escaped them once more.

Watching the post-match scene at the Al Bayt Stadium brought flashbacks – to the World Cup semi-final defeat against Croatia in Moscow in 2018, to the European Championship final loss to Italy at Wembley 16 months ago.

Amid the pain of their latest defeat, Southgate offered consolation to devastated England players who inspired hope, only to see potential glory wrenched from their grasp.

A 2-1 World Cup quarter-final loss to holders France, here in Qatar, was a brutal outcome. England’s display deserved at least to drag the game into extra time.

Perhaps this is why it felt different, even more painful, for England this time. A genuine opportunity to win this World Cup had opened up for Southgate’s team, an emerging blend of youth and experience.

The prize for the winners here was a semi-final against Morocco. And for all the World Cup surprise packages have to offer, their brilliant defending and potent counter-attacking style, England would have gone into that match as hot favourites to make next weekend’s final in Lusail.

This is why Southgate clasped Harry Kane’s face in his hands and offered words of consolation; the captain’s uncharacteristically wild late penalty had been England’s best chance to force extra time.

Kane’s tearful expression revealed what a cruel game this can be; his was the face of a man shouldering the responsibility after giving England so much. Goalkeeper Jordan Pickford made his way down the length of the pitch to offer more comfort to the desolate captain.

The old question will be asked as to why England cannot force their way past elite opposition at major tournaments. But on this occasion, at least, there can be no complaints about the approach.

Southgate spoke of “fine margins” – and they proved decisive. One team took their chances and the other could not. England had no cause for reproach about their efforts.

In the past, England have been justifiably criticised for timid World Cup and Euro exits, and Southgate has not been immune from that – but this was not the case here.

Southgate refused to alter his line-up or formation, or opt for conservatism in an attempt to combat Kylian Mbappe. France’s superstar always carried the hint of menace but England managed to keep him relatively subdued.

England had the majority of the chances but fell foul to France’s more clinical finishing, accompanied by some justified frustration with Brazilian referee Wilton Sampaio.

The official appeared to miss two fouls on Bukayo Saka by Dayot Upamecano in the build-up to Aurelien Tchouameni’s 17th-minute strike, the start of an erratic display, but England were deservedly level shortly after the break when Kane rammed a spot-kick past Tottenham team-match Hugo Lloris after a foul on Saka.

England had the force with them. They were the better team as Lloris saved brilliantly from Jude Bellingham before Harry Maguire’s header glanced the outside of the post. So near.

While they could not beat Lloris, danger lurked. And so it proved when 36-year-old Olivier Giroud, having just been denied superbly by Pickford, stole in ahead of Harry Maguire to head in Antoine Griezmann’s cross with only 12 minutes left.

And then came Kane’s penalty miss.

England have suffered penalty pain before in World Cups and Euros. Here it was again, only in a different form – inside the regulation 90 minutes instead of in a shootout.

Was it the fact it was a second penalty against a keeper who knows him so well? Was it simply the pressure of the situation, even for such a consummate penalty expert? Whatever the reason, Kane’s penalty was awful, skied into disbelieving England fans behind the goal.

It was all over. England were coming home early again.

So how will this campaign be reflected upon?

The irony is that while a quarter-final exit represents a regression from the last-four place achieved in 2018, this squad carries much more promise for the future than the one in Russia.

Saka and Declan Rice were truly outstanding and while Bellingham and Phil Foden were not as influential as in previous games, especially against Senegal, this quartet will be an integral part of England’s long-term future.

The arguments will be pushed forward that England won against those they should have beaten and lost to the first elite team they met but this was a different performance to those that have fallen into that category before. Southgate’s team were not hiding behind the door here. They were the primary attacking force. Their fault was a failure to take chances.

England were impressive against Iran, Wales and Senegal but drab against the USA. Their 13 goals came from eight different players. It was their highest number at a World Cup.

Sadly, other statistics do not make as comfortable reading.

England have been knocked out of the World Cup quarter-finals seven times, more than any other country. Kane’s penalty record for his country is not perfect – 17 conversions from 21. What he and England would have given for that to read 18.

There are elements of a bright future for England – but will their manager be part of it?

The Football Association would like Southgate to serve every day of the contract that takes him to December 2024 but ultimately the decision rests with him. Will he feel a three-tournament span is enough? Will he want another crack at club management?

He was keeping his counsel as he told BBC Sport: “These tournaments take a lot out of you and I need a bit of time to reflect. We’ve done that after every tournament and I think that’s the right thing to do.”

Once again, England and Southgate will be reflecting on what might have been, as a very good chance to win the World Cup slipped agonisingly through their clutches.

Russia Seeks Gains in Ukraine Before Western Tanks Turn Up