Conagra Stock Is Not A Bargain, But Rather A Value Trap (NYSE:CAG) 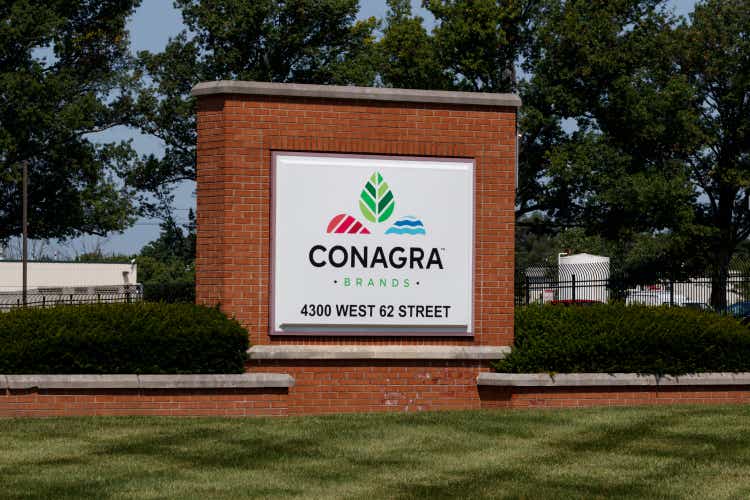 
Conagra Brands (NYSE:CAG) is one of America’s large packaged foods companies. It is known for brands such Slim Jim, Vlasic, Birds Eye, and Banquet.

The firm historically delivered strong returns in the 1980s and 1990s. However, since the late 1990s, CAG stock has trailed many of its other food peers along with the S&P 500 as a whole. Here’s a chart comparing the firm’s performance (including dividends) against the Consumer Staples ETF (XLP) and S&P 500:

Conagra more or less kept up with the market through around 2017 but has badly trailed the pack since then. That said, shares have perked up a bit in 2022, and have advanced to new highs in recent weeks.

Is the company finally turning the corner? Unfortunately, I don’t think the story has materially improved. And I say that as a former Conagra shareholder that sold years ago, frustrated with the lack of progress. As of today, I don’t see much that would change my mind.

As you can see, Conagra has consistently been well below its peers. Despite starting off a lower point, this served as little support for Conagra’s margins when the current inflation shock hit the industry; CAG’s gross margins have fallen nearly as sharply as its more profitable peers since 2021.

I’d also note Conagra spun off its lower profit margin Lamb Weston (LW) potato business in 2016. In theory, carving out a lower-margin piece of the business should have allowed Conagra to achieve higher returns, and thus a higher valuation, on the remaining parts of its business. But, this hasn’t happened.

Why focus on gross margins? Food companies are known for delivering strong gross margins, often in the 30-40% range. That gives companies plenty of room to earn strong returns on capital and generate cash for dividends or share buybacks. By starting with a much lower profit margin on the top-line, Conagra has less wiggle room for dealing with changes in the industry, consumer demand, or exogenous shocks such as the inflationary spiral we’ve seen recently.

In Conagra’s most recent conference call, management talks about the company’s moves to gain market share in categories such as frozen foods. And Conagra is indeed having success on this front. But on a product category like frozen goods, profit margins already tend to be low, and Conagra seems willing to sacrifice further margin to protect and add to its market share.

Valuation Is Creeping Up

CAG stock hit a peak of $41 back in 2017. Going way farther back, shares hit $29 each way back in 1997. With that context in mind, the company’s current $38 share price might seem to leave a lot of upside possibilities.

However, digging into the financial results, things are much less promising. The company’s earnings and EBITDA simply haven’t grown at a robust pace in recent years, leaving the company’s current valuation with relatively little underpinning.

To that point, here’s a 10-year chart of the company’s EV/EBITDA ratio. When shares hit a similar valuation in 2016, it ultimately led to a very poor period of forward returns for shareholders:

Conagra bulls can counter this by saying that shares look cheap on an earnings basis. CAG stock is currently trading at more than 30x trailing earnings, but that is marred by one-time costs. On a forward earnings basis, shares are trading around 16 times. That’s a discount to most other food companies.

However, you’ll notice that, going back twenty years, Conagra has hardly grown earnings per share at all:

Bulls will probably argue that Conagra is a big bargain at 16x forward earnings against the likes of McCormick (MKC) or Hershey (HSY) which tend to trade in the mid-to-high 20s. However, those latter companies actually grow their earnings significantly, whereas Conagra simply does not:

When the industry leaders grow earnings 400% over a twenty-year span and Conagra hardly grows at all, that should help clear up why the latter firm deserves to trade at a much lower P/E ratio than its peers.

Despite this commentary, I know some value investors will still be drawn to the cheaper stock. Perhaps Conagra can turn things around, get earnings growing, and start to deserve a higher P/E multiple like its peers. It’s possible.

But before buying CAG stock, stop and ask: “What would cause this transformation?” Peers have made acquisitions focused on growing markets such as millennial shoppers, Mexican-inspired flavors, and healthful proteins. Peers have spent heavily on R&D and marketing to boost their competitive position. Peers have strong management teams with proven histories of consistent growth and adept handling of changing industry conditions.

Conagra, at least at this time, doesn’t have most of these positive factors working for it. That’s why I started this piece by focusing on gross margins. A company that can earn a lot on its product sales starts from a position of strength. A company that is having to compete on cost to fight for market share is starting from a position of weakness.

“[Conagra’s] commitment to maintaining below-average investments in marketing (about 2.2% of revenue on average over the past three years compared with the 4.6% peer average) and research and development (0.5% of revenue compared with the 0.8% peer average) fails to give us confidence that Conagra’s preferred status with retailers would persist over the next 10 years, as required for a narrow moat designation.”

That’s the crux of the matter right there. Conagra hasn’t made the sorts of investments for the long-term, be it strategic acquisitions, or internal marketing and R&D programs which would elevate the company’s brands and position in the food industry. As such, it may struggle to hold onto its current position over time, let alone manage to grow.

It’s my view that Conagra’s brands are not especially strong. While the company’s products have resonance with some consumers in some product categories, I don’t see their product line-up as having many top-tier components.

I believe this creates the central issue with Conagra: It simply can’t raise pricing enough to get margins up and prosper during turbulent periods such as the current one. Conagra seems like a company that will have to compete on price to generate more consumer demand, instead of being one where the brands dominate on their own merit. By focusing on price, Conagra also exposes itself to more competition from private label peers than more upscale brands would.

There’s nothing wrong with this sort of company inherently. At the right valuation, a budget-centered consumer staple company can make plenty of money. However, Conagra’s valuation has already risen significantly with the recent rally. At least for the intermediate-term, I see little upside in owning CAG stock beyond the 3.5% dividend yield.