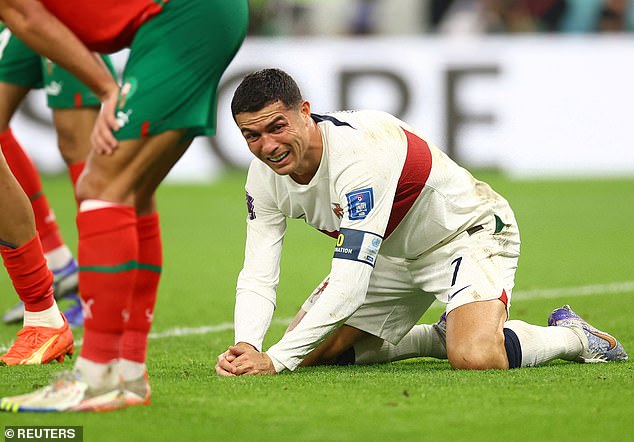 By Dominic Hogan For Mailonline

Cristiano Ronaldo will not return to Lisbon on Sunday after his country’s shock quarter-final exit from Qatar 2022 to underdogs Morocco.

Ronaldo is accompanied by nine others to stay on in Qatar, after the Portuguese FA announced only 14 players would be returning to the nation’s capital following Saturday’s historic 1-0 defeat.

Of the initial 26-man World Cup squad, Danilo Pereira and Nuno Mendes had already withdrawn through injuries, leaving 24 players at the tournament – 14 of whom will now return to Lisbon at approximately 5.15pm on Sunday.

Players will return to Lisbon irrespective of where they play their club football, be it with Porto (Pepe, Otavio, Diogo Costa), or abroad like Ruben Dias (Manchester City) and Jose Sa (Wolves).

It was a World Cup to forget for Fernando Santos’ Portugal side, who limped out in the final eight to the Atlas Lions, who became the first African team to make the semi-finals of a World Cup.

But it was perhaps a worse tournament for captain Ronaldo, who returns home without a club after his Manchester United contract was torn up following his sensational interview with Piers Morgan.

During the competition itself Ronaldo again grabbed the headlines on numerous occasions.

Firstly, he was criticised for the manner in which he won his penalty against Ghana in the opening group game, before claiming a goal against Uruguay which was proven never to have touched him.

Then after being dropped against Switzerland in the last 16 he was seen walking off the pitch on his own whilst his team-mates continued to celebrate, and against Morocco he stormed off the pitch at the final whistle.

In being benched against Switzerland, Ronaldo failed to start a major tournament knockout match for the first time since Euro 2008.

The 37-year-old did however still manage to break records in Qatar, becoming the first male player to score in five successive World Cups, as well as equalling Badr Al-Mutawa’s 196-cap international record against Morocco.