Dalal Street Week Ahead | 10 factors that will keep traders busy 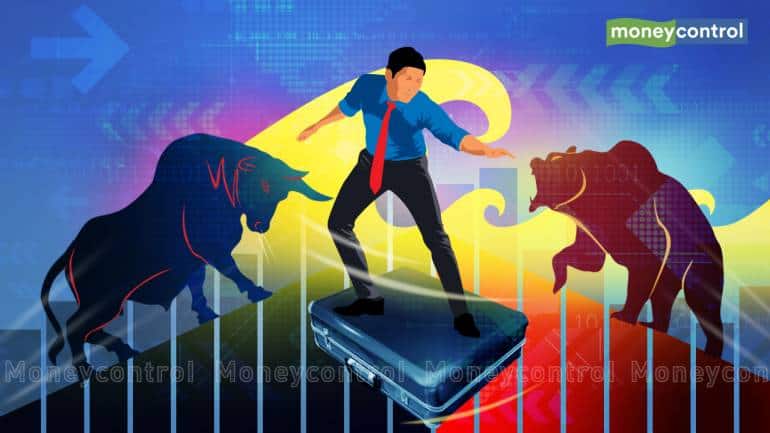 The market erased all its previous week’s gains and fell more than one percent in a volatile week that ended on December 9, despite a sharp correction in oil prices. The slightly hawkish tone by the Reserve Bank of India (RBI), fear of global slowdown, and caution ahead of the FOMC meeting next week caused selling pressure in the market.

Technology stocks were in lead to pull the market down amid worries over global growth, followed by energy, infra and auto stocks. However, the buying in banking and FMCG stocks restricted losses.

The benchmark indices snapped two-week gains. The BSE Sensex corrected nearly 700 points to 62,182, and the Nifty50 dropped around 200 points to close a tad below 18,500. The Nifty Midcap 100 index was down six-tenth of a percent and Smallcap 100 index declined one percent.

The caution along with consolidation is expected in the coming week too, with a focus on Fed meeting outcome, and macroeconomic numbers including inflation data from India, the US, Europe and the UK. This will be followed by some recovery in the later part of the week, experts said.

“We’re trading largely in line with the global trend and indications are in the favour of further consolidation,” Ajit Mishra, VP – Technical Research at Religare Broking said.

Vinod Nair, Head of Research at Geojit Financial Services, also says the volatility is expected to remain as the market awaits the domestic and US inflation numbers, and the Fed’s interest rate decision next week.

Here are 10 key factors that will keep traders busy next week:

On the domestic front, the CPI inflation for November is the key number to watch out for on Monday, which is expected to ease further from the 6.77 percent reported in October due to a fall in oil and food prices. The favourable base effect is also likely to help check inflation.

If the inflation print falls and stabilises below the upper threshold of 6 percent set by the RBI in the coming months, then that would help the central bank take a pause in the rate hike, experts said.

The RBI expects inflation at 6.6 percent for the current quarter and 5.9 percent for the last quarter of FY23. The full-year inflation is expected to be at 6.7 percent, assuming that the oil price will be at $100 a barrel, which is currently at $76.

Still, even as headline inflation is moderating, he thinks 11 straight months of above-target inflation warrants the RBI to stay hawkish. So far, the RBI raised the repo rate by 225 bps this year to 6.25 percent, from 4 percent in April this year.

Apart from CPI, industrial output data for October on Monday and WPI inflation numbers for November on Wednesday will also be watched. In addition, the balance of trade for November will be released on Thursday, while bank loan and deposits growth for the fortnight ended December 2, as well as foreign exchange reserves for the week ended December 9, will be announced on Friday.

Globally, all eyes will be on the outcome of the two-day meeting of the Federal Open Market Committee (FOMC) on Wednesday night. Most experts hope the Federal Reserve will raise interest rates by half a percentage in the last meeting of the calendar year — lower than its 75 bps hike announced four times in the recent past meetings — given the elevated inflation which is far above its target of 2 percent in the long run.

If it delivers a 50 bps rate hike, then the total rate hikes by the Federal Reserve would be 4.25 percentage points in nine months since April this year.

Also, the European Central Bank and the Bank of England will announce their interest rate decisions on Thursday.

Ahead of the FOMC meeting, global investors will keep a close watch on the US inflation print for November, scheduled to be released on Tuesday evening. Largely, as per most economists, the inflation numbers are expected to decline further in November, from 7.6 percent recorded in October.

Moreover, Eurozone and the UK’s inflation numbers will be announced in the coming week.

Here are the key global macroeconomic data points to watch out for next week:

The fall in oil prices is definitely a boon for India, a major oil importer, and in fact, a supportive factor for equity markets as it lowers fiscal deficit concerns and is better for corporates with improving margin performance. But growing recession fears globally is a cause of concern as it ultimately impacts economic growth.

International benchmark Brent crude futures corrected 11 percent in the passing week, to close at $76.1 a barrel, while WTI crude futures dropped 10.5 percent to $71.6 a barrel on a week-on-week basis.

After significant buying last month, FIIs seem to have resumed selling in the Indian equities again, maybe due to rising recession fears and the upcoming FOMC meeting, as foreign investors have net-sold more than Rs 5,600 crore worth shares in December so far. In fact, this was one of the reasons behind the fall of nearly 400 points in the Nifty from its recent swing high.

But domestic institutional investors remained supportive as expected. DIIs have bought more than Rs 7,000 crore worth of shares in the current month. In fact, they remain confident about India’s growth in the medium to long term, hence buying every major dip.

The flow is going to play a crucial role in the equity market performance in the coming weeks.

There will be a lot of activity in the primary market next week as three IPOs worth more than Rs 1,800 crore are set to be opened for subscription.

The initial public offering of Sula Vineyards will open on December 12 with a price band of Rs 340-357 per share. The offer will close on December 14.

India’s largest winemaker and seller plans to raise more than Rs 960 crore by offering more than 2.69 crore shares, which is entirely an offer-for-sale by promoter Rajeev Samant, and investors.

The second IPO will be Abans Holdings, a part of Abans Group. The offer will open for subscription during December 12-15. The financial services company aims to raise Rs 345.60 crore through the issue of 1.28 crore shares, comprising a fresh issue of Rs 102.6 crore and an offer-for-sale of Rs 243 crore by promoter Abhishek Bansal. The price band for the offer is set at Rs 256-270 per share.

Premium automotive retailer Landmark Cars will be the third IPO getting opened on December 13 and the closing date will be December 15. The company aims to mobilise Rs 552 crore through the IPO of 1.09 crore shares. The offer comprises fresh issuance of shares worth Rs 150 crore, and an offer-for-sale of Rs 402 crore by promoter and investors. The price band for the offer is Rs 481-506 per share.

Apart from this, the listing of Uniparts India is on Monday.

The Nifty50 has broken its crucial support of 18,500 which was being held for several sessions, losing nearly 400 points from its new all-time high. The index has formed a bearish Engulfing pattern on the daily charts and a bearish Piercing kind of pattern on the weekly scale, indicating more power with bears.

Hence, the index has taken support (18,410) at the upward-sloping support trend line adjoining November 10 and November 22. If the index breaks the same, then there could be more selling pressure, whereas major resistance is expected to be in the 18,600-18,700 area, above which the index may start moving towards a record high of 18,887, experts said.

The index shed six-tenth of a percent on Friday and declined one percent for the week.

“A break below 18,410 could result in more selling in the index and therefore it should be kept as a stop-loss in longs. On the higher side, 18,600-18,650 levels to act as an immediate resistance,” Devarsh Vakil, Deputy Head of Retail Research at HDFC Securities said.

The volatility index India VIX also seems to have stabilised below the 15 mark and remained in the range of 13-15 levels for almost a month now. Hence, the bulls still seem to be in a comfortable position, indicating that the major downside may be limited, experts observed.