‘Everyone loves us’ – joy at Morocco history makers 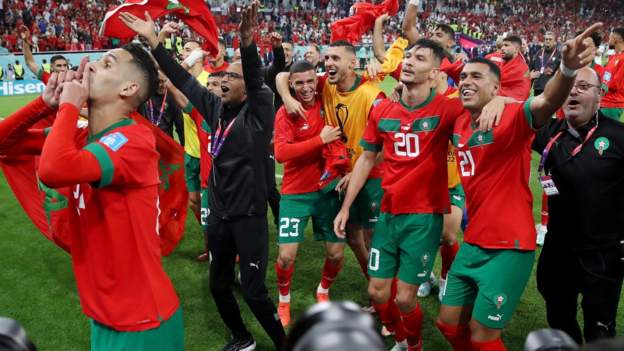 Three previous African sides had reached the quarter-finals of the competition – but could not take that step further.

This time, it was different.

Marvellous Morocco have lit up this World Cup – and their fans got their reward by witnessing their side becoming the first from their continent to reach the semi-finals.

“We are becoming a team everyone loves because we are showing what we can achieve,” said victorious boss Walid Regragui.

“If you show the passion, heart and belief, you can succeed and my players have shown that. It is not a miracle – those in Europe might say it is, but we have beaten Portugal, Spain, Belgium and drawn against Croatia without conceding. That is the result of hard work.

“African and Arab teams work hard but we have made our people happy and proud. The whole continent is proud. When you watch Rocky Balboa, you want to support him and we are the Rocky of this World Cup.”

Tears of joy for Regragui

Cameroon (1990), Senegal (2002) and Ghana (2010) had all fallen at the quarter-final hurdle but Morocco broke the glass ceiling to cause pandemonium at Al Thumama Stadium.

Having whistled each touch of the ball from the Portuguese, the watching supporters’ jeers turned to a cacophony of cheers as substitutes piled on to the pitch at full-time.

Boss Regragui, who has masterminded this run, was hoisted into the air by his players, who then sprinted towards their supporters behind the goal with arms aloft.

Former Scotland winger Pat Nevin said on BBC Radio 5 Live: “The noise in this stadium is incredible. I am trying to think of when such a shock as this has happened in the World Cup.

“They deserve it, not only for the skill and effort but that noise just keeps on turning up.”

Morocco had become not just the first African side, but also the first Arab one from a country with a Muslim majority, to reach the last four of the biggest competition in world football.

The team have displayed their Islamic beliefs, reciting passages of the Quran in their huddle before their success on penalties over Spain in the previous round.

As they had done then too, players and staff bowed down for sujud (prostration) in front of their fans after victory over Portugal.

Meanwhile, substitute Achraf Dari celebrated by draping himself in a Palestine flag, Paris St-Germain’s Achraf Hakimi found his mum again to kiss her while ex-Southampton winger Sofiane Boufal danced with his mum.

Regragui was one of the last to leave the pitch at the end, clearly emotional after such a significant victory.

He was applauded into the post-match news conference once more alongside goalkeeper Bono and said his team “Alhamdulillah (thanks to God)” had a chance of winning the World Cup and that all of the world was now with Morocco “Inshallah (if God wishes).”

He added: “It is the first time I have cried at the end of a match. I have to be an example and show I am mentally strong but sometimes it is too much for you.

“Getting to the semi-finals of the World Cup, the emotions just pour out. I would be lying if we thought we would get to this stage, I just could not control the tears.”

Morocco goalkeeper Yassine Bounou, the player of the match, added: “We are here to change the mentality and get rid of the inferiority. Morocco is out to face anyone in the world, beyond the semi-finals and anything else.

“We have changed this mentality and the generation coming after us will know Moroccan players can create miracles.

“I have great players with me and they are all fantastic. When anyone faces Morocco now, they know they can play at the highest level.”

There were more tears, this time from Cristiano Ronaldo, who trudged down the tunnel at full-time knowing at the age of 37, his dream of lifting the World Cup may well be over.

This is a mammoth sporting moment and is the best performance in this team’s history but it goes beyond football. This is a much-needed moment of collective joy and pride for a whole region and a continent. Fans have travelled from across the Arab world to be here in Doha.

“Now I can tell my kid I was there when my team made history,” one fan told me.

The three words I’ve heard most Moroccan fans have been “proud”, “belief” and “confidence”.

As one fan put it: “This is a moment of confidence that we can stand head to head with the giants.”

Tonight, there is one more word to add to Morocco’s 2022 World Cup tale. History.

‘Good vibes’ from Africans and Arabs

Morocco are a solid, well-organised outfit – but were without key defenders. West Ham’s Nayef Aguerd and Bayern Munich’s Noussair Mazraoui were injured, while captain Romain Saiss taken off on a stretcher in the second half.

It did not matter.

Their replacements showed the battling spirit needed to drag them through.

Morocco are unbeaten in eight games under Regragui, who was appointed only in September, and they have kept seven clean sheets – conceding only an own goal against Canada in the group stages.

Regragui said: “This is the most difficult tournament. We have played some of the best teams, but it is true we could have conceded against Portugal.

“But if you put in the heart, desire and humility you make your own luck. The energy from the African and Arab people gave us good vibes.

“Everyone was behind us and we have made this fantastic achievement and got into the history books. We are into the best four in the world. These are tremendous players and deserve all the plaudits they get.

“We have shown people African teams can get to the semi-final, even the final. Earlier in the tournament, I was asked if we can win the World Cup – why not? Why shouldn’t we dream?

“If you don’t dream, you don’t get anywhere and dreams don’t cost anything. European teams are used to winning the World Cup. Now we have to get in there and go beyond ourselves.”

‘This time for Africa’ – reaction