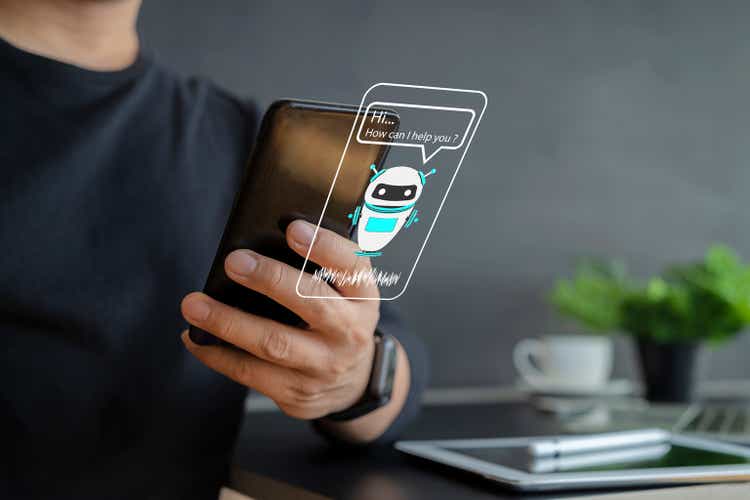 
A hot new AI chat has a lot of investors fearful that Google (NASDAQ:GOOG, NASDAQ:GOOGL) is toast, but the market has forgotten that Alphabet has a more diverse business now. The stock remains remarkably cheap, falling below $100, with the potential dramatically boost profits via an increase to efficiency. My investment thesis remains ultra Bullish on the stock with the deep valuation and limited threat from an AI chatbot.

No ChatGPT Threat Yet

In only days, a new AI chatbot from private OpenAI called ChatGPT reached over 1 million users. The conversational chat service answers questions in natural language making some people think the interaction is with a human being.

The service reached 1 million users at a record pace having topped all of the major tech giants that took years, in some cases, to reach this user level. Of course, ChatGPT is an advancement of previously chatbots from OpenAI, so possibly the better companion would be add-on products such as Instagram Reels or Twitter Spaces versus the original sites.

Also, investors need to consider the recent success and collapse of Clubhouse. The live audio chat service quickly surged beyond 1 million users and was just as soon replicated by Twitter Spaces to oblivion now.

One has to wonder if Google can’t just do the same to ChatGPT by incorporating an AI chat function into Google similar to how Twitter did with the audio chat product. The service became more convenient to utilize within an existing social media platform with 100x the users versus an independent service like Clubhouse.

Either way, the AI chatbot service has grown extremely fast. The service currently requires a login to use and the CEO has already admitted the computing costs are very high, requiring a quick path to monetization.

A service requiring a fee to use definitely won’t threaten Google search. The majority of consumers will continue flocking to Google for free search results.

While a lot of technology experts have claimed ChatGPT is a threat to Google and offer up highly technical examples, the service doesn’t provide the links to other websites where Google is utilized the most and highly monetized. As CNet highlights, ChatGPT is efficient at answering complex questions and writing compute code, but the chatbot doesn’t always correctly answer questions. The AI chatbot shouldn’t be relied on for questions while Google provides links to the most reliable website with the accurate information.

Most times, consumers searching for actual goods and services are looking for the actual original source of the information. Over time, OpenAI could build a service with the website links and citations or Google could add their own AI chatbot to replicate the service of ChatGPT. Remember, the internet search king is already heavily involved with AI to obtain the most accurate search results.

Either way, someone betting against Google is betting against an organization with 180K employees focused on not losing the golden goose of internet search. Not to mention, a comment from the OpenAI CEO on the high computing costs might question the feasibility of the product without charging a fee.

Just last week, Google Cloud was announced as a joint winner of the $9 billion U.S. Department of Defense cloud services deal. The deal has been held up for years and now has Google and Oracle (ORCL) joining Amazon (AMZN) AWS and Microsoft (MSFT) Azure as winners of the contract originally awarded to Microsoft causing Amazon to sue due to the feud between former President Trump and Amazon founder Jeff Bezos.

For Q3’22, Amazon still obtains over 50% of revenues from Google Search. Other business units like YouTube and Google Cloud have tremendous opportunity for growth in the years ahead.

In addition, Google has units in the works such as Waymo in robotaxis providing other growth opportunities outside of internet search. In total, the tech giant is forecast to top $280 billion in revenues this year and a chatbot that doesn’t even replicate what Google does isn’t going to suddenly upset their business.

Both YouTube ads and Google Cloud are close to being $30 billion businesses, even before Cloud incorporates business from the new DoD contract. Though, Google Cloud isn’t profitable, so the Google Services business is the only profit driver. This business does include both YouTube divisions providing optionality outside of search.

As highlighted in prior research, Google is cheap at just 13.5x non-GAAP EPS estimates of $7. If the company can become 20% more efficient, the tech giant has the potential to drive EPS up to $10, and the stock now trades below $100 while having a cash balance in excess of $100 billion.

Considering internet search is more than 50% of the business and a far higher portion of the profits, the stock is definitely susceptible to any impact of the Google Search ad business. The company is far too powerful to let a small AI chat steal the golden goose of digital search ads. Though, if it was to happen, Google would struggle to rally from these levels until YouTube, Google Cloud or maybe Waymo became large enough to drive the next growth wave.

The key investor takeaway is that Google is priced for the business to struggle due to a chatbot like ChatGPT. The odds appear very low that this chatbot will impact the digital ad business of Google, but investors need to keep a close eye on developments in the sector.

The stock remains an incredible bargain trading at ~9x the earnings potential of a more efficient business.