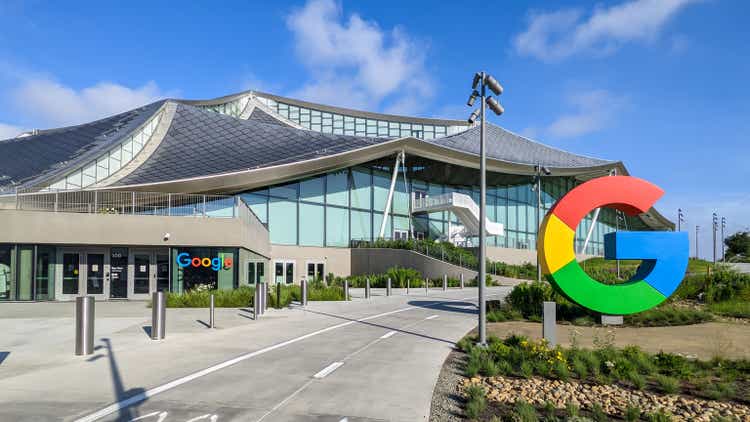 In October last year, one of the largest companies headquartered in Menlo Park dazzled us with its interpretation of the metaverse. It even changed its name from Facebook to Meta Platforms (META) subsequently, seeing its future firmly established in the VR world.

Based on the two-year old GPT-3 model, OpenAI’s ChatGPT has created massive hype, as it amassed 1M users in record fashion.

We have seen analyses and unnecessary “fear-mongering” in the media, suggesting that Google’s (NASDAQ:GOOGL) (NASDAQ:GOOG) most-prized and critical revenue driver: Google Search is ripe for disruption.

However, before anyone arrives at any conclusion, we urge investors to consider what Google has been doing all this while with AI. In addition, Google investors should be keenly aware that AI is critical to Google CEO Sundar Pichai’s focus.

Among Pichai’s 17 direct reports includes Google SVP Jeff Dean of Google Research and AI. Core to Google AI’s mission is “to use AI to augment the abilities of people, to enable us to accomplish more and to allow us to spend more time on our creative endeavors.”

Let me take a pause. Dean’s choice of words is essential. He uses “augment,” seeing AI as a complementary tool to strengthen Google’s value proposition to its merchants, consumers, and users. It’s not meant to replace or supplant. Why? Remember, AI output, including ChatGPT’s underlying model, is based on probabilistic assumptions instead of deterministic ones. Stratechery articulated in a recent piece:

AI output, on the other hand, is probabilistic: ChatGPT doesn’t have any internal record of right and wrong, but rather a statistical model about what bits of language go together under different contexts. The base of that context is the overall corpus of data that GPT-3 is trained on, along with additional context from ChatGPT’s RLHF training, as well as the prompt and previous conversations, and, soon enough, feedback from this week’s release. – Stratechery

As a result, it is amiss for users to assume that ChatGPT is the “arbiter of truth.” On the contrary, it has proved to deliver incorrect/inaccurate information in a highly confident manner. So confident that HubSpot (HUBS) Co-Founder and CTO Dharmesh Shah articulated:

The biggest issue with GPT-3 (ChatGPT) is not that it sometimes gets things wrong. It’s that its answers don’t indicate the confidence level it has in the response. It says everything with 100% confidence. Still impressive, though. – Dharmesh Shah’s LinkedIn

We believe Shah’s message is pretty nuanced here. Think about it. If some probabilistic device/software delivers incorrect/inaccurate information with 100% confidence, doesn’t it sound like “misinformation?”

Google has never intended AI to replace its business model or processes because the underlying model does not yet have the capability.

Artificial General Intelligence (AGI) is the core mission of OpenAI. Yet, even Elon Musk highlighted that ChatGPT is not even close as he responded to a tweet about how “scaling ChatGPT” would not lead us to AGI. Musk accentuated:

To be called AGI, it needs to invent amazing things or discover deeper physics – many humans have done so. I’m not seeing that potential yet. – Elon Musk Twitter

Google Has Always Been About Using AI Effectively

Pichai has often laced his prepared remarks in earnings commentary or keynote speeches that he participated in with AI as a focus. As such, it has helped embed the application of Google AI into its respective business models, from Cloud to Search, YouTube, Other Bets, and Hardware.

Therefore, Google has always been about AI and has taken significant steps to further enhance the experience, effectiveness, and monetization. Pichai articulated the application of AI for its Search business:

Over a decade ago, focusing the company’s efforts on mobile helped us to build and grow our business for the shift to mobile computing. We are at a similar point now with AI, another transformational technology. Our investments in AI and deep computer science mean that we can deliver a wide range of breakthroughs across our products and services to help people, businesses and communities. At our Search On event, we shared how we are using AI advances to deliver a more natural and intuitive search experience. (Google FQ3’22 earnings call)

At Google Cloud Next ’22, Pichai also gave the keynote by highlighting how Google Cloud has embraced AI in its offerings. He accentuated:

AI is another really important area for Google Cloud. Google has long been an AI-first company. We’ve made progress in some of the most challenging areas of research, including translation, computer vision and natural language processing. These advances are powering helpful product innovations, from enabling people to search using video and tech simultaneously, to summarizing long documents and highlighting what matters. – Google Cloud Next ’22 Keynote

Generative AI unleashes people’s creativity and unlocks new workflows. Let’s look at an example of how we might see this come to life here in Workspace. Amanda is a marketer at a running shoe company, a footwear company. And she’s been tasked with creating a video to introduce their brand-new, zero-carbon, high-performance running shoe. To get started, she collects relevant data and assets. Then she might type something like this, create a 90-second video for a campaign, but using our brand guidelines of people running, make it outdoorsy, and maybe add some upbeat music. With the power of Google AI, Workspace takes all of this in and suggest several different creative directions for her to choose from. She likes the look of the mountain concept, and that’s the one she picks. She begins to refine the idea. With the help of intelligent suggestions and iterations, she makes a few changes until she finally lands on something she loves. – Google Cloud Next ’22

No surprise that at its recent all-hands meeting, Pichai was peppered with questions about the recent changes to its performance grading. Of course, employees were more concerned about whether their jobs could be cut, given the recent tech layoffs.

However, we also believe that Google and its employees know that the company has a strong lead and foundation in AI and can monetize its product and services with AI that its customers, users, and merchants can rely on.

Ultimately, OpenAI needs to find a way on how it intends to monetize ChatGPT (given the “eye-watering” compute costs) before Google investors should start to ponder about “disruption.”

Stratechery’s Ben Thompson aptly highlighted that he thinks our children’s homework seems ripe for disruption. Not that it would churn out the output of the “correct” answers for our children. But, for it to churn out the “incorrect” responses that can only be corrected if our children “have done their homework.” He articulated:

Here’s an example of what homework might look like under this new paradigm. Imagine that a school acquires an AI software suite that students are expected to use for their answers about Hobbes or anything else; every answer that is generated is recorded so that teachers can instantly ascertain that students didn’t use a different system. Moreover, instead of futilely demanding that students write essays themselves, teachers insist on AI. Here’s the thing, though: the system will frequently give the wrong answers (and not just on accident – wrong answers will be often pushed out on purpose); the real skill in the homework assignment will be in verifying the answers the system churns out: learning how to be a verifier and an editor, instead of a regurgitator. – Stratechery

With GOOGL likely bottoming out, as we highlighted in our previous article, we maintain a Buy rating, and ignore the fear-mongering.