Harley-Davidson: Much Depends On Livewire (NYSE:HOG) 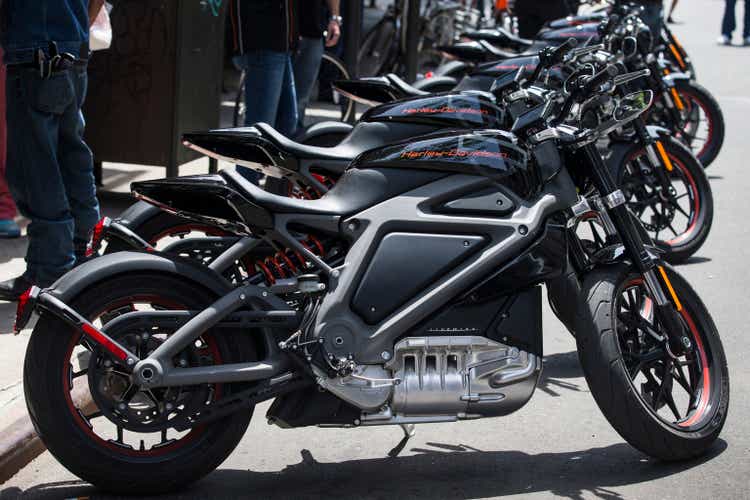 
America’s iconic premium motorcycle maker Harley-Davidson (NYSE:HOG) is working on turning around sagging revenue and profit growth with its Hardwire strategic plan which is showing early results. Longer term, the company’s performance would depend heavily on LiveWire, but risks remain.

Harley-Davidson reported strong results for the quarter ended September 2022. Revenues rose 21% YoY to USD 1.65 billion driven by strong motorcycle shipments which rose 19% YoY to 57,100, gross profits rose 36.5% YoY to USD 568 million, and net income rose 60% YoY to USD 261 million. The company’s strong performance despite supply chain bottlenecks, labor challenges, and macro headwinds is likely attributable to their five year (2021-2025) strategic plan (“Hardwire”) which increased focus on their most profitable products and geographic markets, as well as a recovery in production after an unexpected production suspension in Q2 2022.

Near term, economic challenges including inflation and rising interest rates are headwinds to revenue growth. For the coming quarter, the company expects motorcycle revenues to increase 5% to 10%, and motorcycle margins to continue expanding reaching 11% to 12%.

Longer term, the company is looking to its “Hardwire” strategic turnaround plan to propel revenue and profit growth which have been essentially flat over the past several years.

The brand’s problems are largely the result of demographic issues; their core customer base is aging and younger riders continue to show little interest despite years of effort to appeal to them. The average Harley-Davidson customer is a married man in his 50s, with an above average household income, whose motivations for buying motorcycles are largely out of interest in the product or lifestyle. The younger generation however tend to buy bikes for practical reasons, and as a result tend to seek smaller, lighter, sleeker, budget-friendly, and environmentally-friendly motorcycles, the opposite of Harleys which are generally bigger, heavier, “old school”, expensive, and guzzle gas.

The company’s turnaround plan aims to focus on Harley-Davidson’s most profitable products and markets. The plan also however appears to focus on their existing “Baby Boomer” riders rather than evolving to adapt to the preferences of younger consumers. CEO Jochen Zeitz mentioned about setting “realistic expectations” for growth going forward which suggests profitability could improve in terms of margins, but absolute profitability as well as revenues may see limited growth given the brand’s shrinking demographic, barring any significant changes to consumer preferences or a strategic change to reach out to younger riders.

LiveWire, the company’s electric motorcycle division then becomes its only major hope at supporting long term growth. Although there have been questions over classifying their electric vehicle division as a new standalone brand rather than working with their existing Harley-Davidson brand, there are merits to the strategy. Making drastic changes to the Harley-Davidson brand to suit younger consumers may not work out as anticipated, and it risks alienating their existing customer base who value the iconic brand’s century-old legacy. LiveWire is also not expected to cannibalize legacy Harley-Davidson motorcycle sales since they cater to different markets; LiveWire caters to younger (aged 18-35), urban riders, the opposite of Harley-Davidson’s target market, and therefore expands Harley-Davidson’s addressable market. LiveWire will also be strategically linked to the Harley-Davidson brand, which not only could deliver possible synergies for both companies through shared resources and strengths, but longer term could also potentially open a customer acquisition channel for Harley-Davidson who could tap into LiveWire customers when they mature and have the means to upgrade.

It remains to be seen how successful LiveWire will be in resuscitating sales growth; the company is aiming for LiveWire 100,000 motorcycle shipments by 2026 with revenues of USD 1.77 billion, a highly ambitious target but if successful could almost match Harley-Davidson’s sales, (which reached 188,494 units in 2021). If successful, LiveWire could also drive revenues for adjacent businesses including parts and accessories, merchandise, and financial services, in line with the company’s Hardwire turnaround plan.

So far there are reasons to be cautiously optimistic; without the baggage of Harley-Davidson’s “vintage” brand positioning, LiveWire has been freely listening to their young audience, exploring options, and adapting accordingly (after seeing tepid sales of their very first model launched in 2019 which enjoyed rave reviews on performance and style but was criticized for its excessively high price point, the company has been responsive, launching new models with lower prices). With environmental regulations tightening around the world and fossil fuel models being phased out, electric motorcycles are envisioned to be the future of the industry, and the market is still at a very early stage of development giving LiveWire, an early mover in the premium electric motorcycle space, ample time to build a name and carve a share of the market for itself.

Apart from execution risks and competitive risks (from electric motorcycle startups such as Zero Motorcycles, NIU (NIU), and Energica, as well as legacy motorcycle makers including Triumph, Ducati, Honda, and Indian Motorcycle (PII) who are working on their own electrification strategies), Harley-Davidson’s high debt load may make it challenging for the company to raise funds if required to support their new electric brand’s expansion, particularly amid a climate of rising interest rates.

LiveWire is currently operating cash flow negative and it remains to be seen when (if at all) they would reach sufficient scale to turn cash flow positive. After factoring in necessary capital expenditures for LiveWire as well as the company’s legacy Harley-Davidson business, plus dividends, Harley-Davidson may be forced to raise more funds which may not be ideal if interest rates continue to rise or remain elevated.

Harley-Davidson’s stock carries a high short interest of 5.4%, suggesting pessimism over the company’s prospects, likely due to their high debt load and rising interest rates, along with near term challenges from a weakening economy, and anticipated increases in long term capital expenditures and operational expenses such as marketing and advertising costs to support their burgeoning electric motorcycle business.

Harley-Davidson’s Hardwire plan appears to be on track and their long-term strategic objectives could see it benefiting from electrification through LiveWire while maintaining their iconic namesake Harley-Davidson brand. LiveWire expands their target market, and although margins may be lower compared to Harley-Davidson, LiveWire could overall help the company reverse the trend of flat sales and profit growth seen over the past several years.

It remains to be seen how successful LiveWire will be but so far, there are reasons to be optimistic about Livewire’s prospects given the relatively early stage the industry is in and Livewire’s advantages including early mover advantage, and synergies with Harley-Davidson.

Yet, risks remain including competitive risks, execution risks, and notably risks associated with their high level of debt which could constrain their ability to support Livewire’s expansion.

Given near term headwinds from a weakening economy, high debt amid rising interest rates, and uncertain outlook for their LiveWire division which is still at a nascent stage of development, investors may opt to wait and see.

Analysts are mostly neutral on the stock.

Euronav: The Saga Of A Failing Merger In A Profitable Oil Tanker Market (NYSE:EURN)