Idaho murders: Police say they’re getting ‘good tips’ 4 weeks in despite lack of reward and suspect 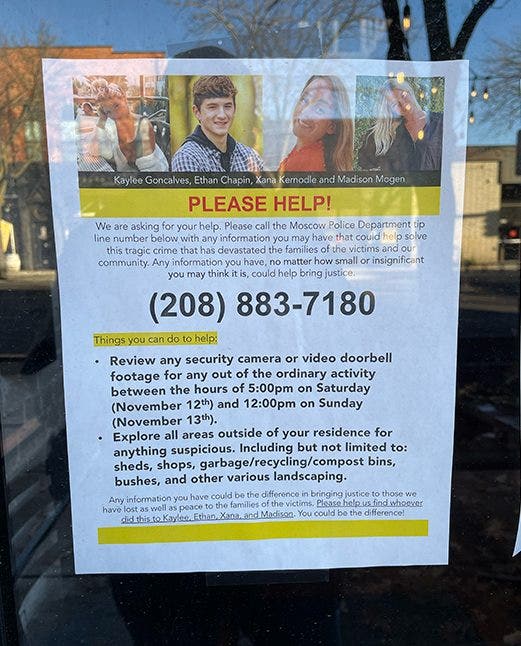 
MOSCOW, Idaho – The killer of four University of Idaho students who attacked them in their beds last month remains at large four weeks after a group of classmates called 911.

Police have not publicly named any suspects or persons of interest – but they say they’re getting “good tips and leads” despite a lack of a reward offered in the case. Especially after they released new details Wednesday when they asked the public for help finding the occupant or occupants of a white 2011 to 2013 Hyundai Elantra seen near the victims’ home around the time of the slayings.

Police say anyone in the Elantra may have “critical information to share” in the case.

Ethan Chapin, 20, Xana Kernodle, 20, Madison Mogen, 21, and Kaylee Goncalves, 21, along with the women’s two other roommates in Kaylee Goncalves’ final Instagram post, shared the day before the slayings.
(@kayleegoncalves/Instagram)

When asked why not and whether one was in the works, police spokeswoman Robbie Johnson said police were already working through a steady supply of information regarding the quadruple homicide.

“Investigators continue to get good tips and leads and are focusing on those at this time,” she told Fox News Digital.

In fact, after announcing they were looking for information on the Elantra, police said they received so many calls they asked the FBI to handle them.

Moscow, Idaho detectives are interested in speaking with the occupant(s) of a white 2011-2013 Hyundai Elantra, with an unknown license plate in relation to the investigation of a quadruple homicide on November 13, 2022. This image is not the car in question, it is just for reference.
(Moscow PD)

“The global call center has the resources to take those calls, categorize them, and send them on to investigators, so they can utilize those tips in the investigation,” the Moscow Police Department said Thursday.

Beyond that, details are scarce — but by now, police likely are quietly making progress behind closed doors, according to Joe Giacalone, a John Jay College of Criminal Justice professor and former NYPD sergeant.

Yet a reward can incentivize people to come forward with information unavailable to investigators at the crime scene or through other forensic efforts.

“The idea behind the reward is putting it out initially because you’re looking for somebody specific, who came home for the holidays and who might have had some bruises or cuts or some other thing,” he told Fox News Digital. “The uncle who doesn’t like everybody is sitting at the Thanksgiving table and looking at the kid saying, ‘Something’s wrong here.'”

Pat Diaz, a private investigator and former Miami-Dade homicide detective worked a high-profile child murder in the 1990s that resulted in an arrest and conviction after one such tip came in.

“One lucky lead, with all these sleuths out there, is gonna help you solve the case,” he told Fox News Digital.

Months after Jimmy Ryce was abducted on his way home from school in 1995, his landlady and employer grew suspicious that he’d stolen from her. When she searched his trailer, she found the missing boy’s backpack inside and her missing gun, which had been used to kill the boy.

Fall graduates from the University of Idaho sit at their commencement ceremony on Saturday, Dec. 10, 2022. An estimated 25% to 40% of the school’s 11,500-person population did not return to in-person learning after Thanksgiving following the unsolved slayings of four students at a house just steps off campus.
(Derek Shook for Fox News Digital)

“She saw the flyer with my name and the reward and [found] a backpack,” he told Fox News Digital Saturday. “Then [she] called.”

Juan Carlos Chavez, 46, was arrested. He confessed, led police to the boy’s body and was later executed.

“I would give out the reward now while they still have personnel,” said Paul Mauro, a lawyer and retired NYPD inspector who has been closely following the case.

The number of investigators assigned to the task force will decline over time, and he worried that if a reward is offered late in the process, there may not be enough manpower left to “weed out the wheat from the chaff.”

“When it starts to dwindle is no time to put out a reward,” he said. “You won’t have the bodies to investigate the tips.”

Anyone with information is asked to call the tip line at 208-883-7180 or to email [email protected] Digital Media can be submitted at fbi.gov/moscowidaho.

Michael Ruiz is a reporter for Fox News Digital. Story tips can be sent to [email protected] and on Twitter: @mikerreports