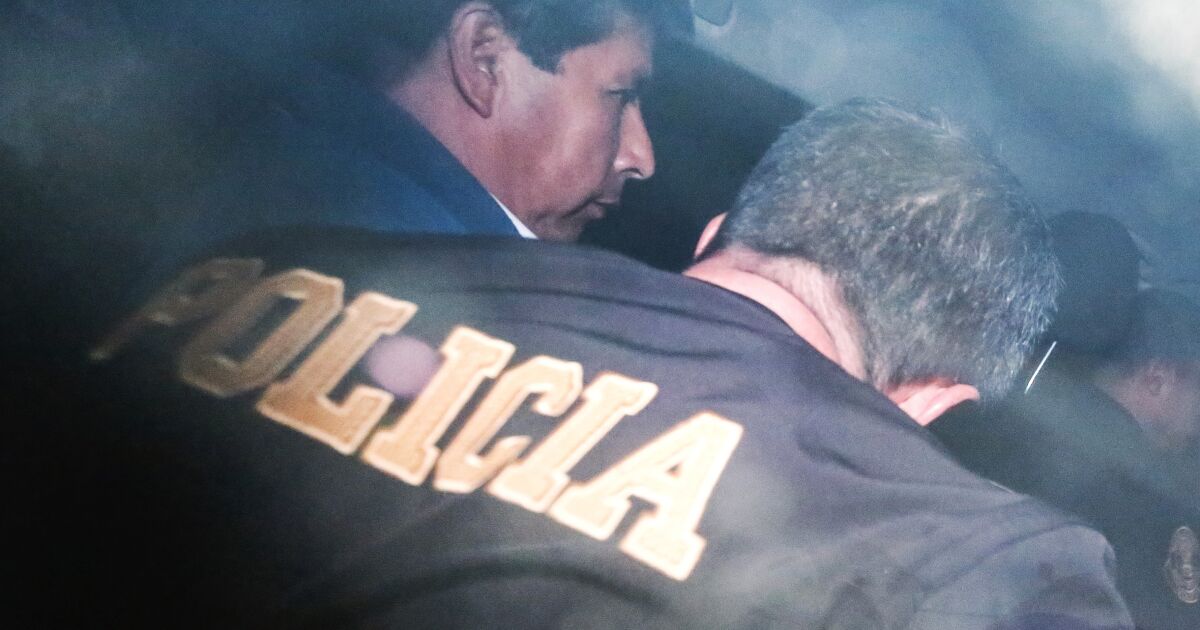 LIMA, Peru —  A right-wing populist president who led Peru during the 1990s is serving a 25-year prison sentence for human rights abuses. Three of his four immediate successors faced bribery charges — one killing himself with a gunshot to his head when police descended on his home to arrest him.

The ouster of leftist President Pedro Castillo last week was a dramatic turn of events by any political standard: The embattled chief of state was impeached Wednesday hours after he tried to dissolve Congress, a move denounced by lawmakers as an attempted coup.

But Castillo’s removal from office 16 months into his five-year term was only the most recent manifestation of extreme political turbulence that has buffeted this troubled South American nation of 32 million for decades.

While democratic elections are held regularly in Peru, critics say that the results often have more to do with settling scores and politicians getting rich than installing effective governments. Daggers are soon out for the victors.

Castillo’s successor, former Vice President Dina Boluarte — Peru’s first female chief of state — is the country’s sixth president in four years, and analysts question whether she will be able to complete her term.

“The instability of the political system is well established,” said Alberto Vergara, a Peruvian political scientist. “We will continue having episodes like last Wednesday as long as we endure a system that is corrupt, dysfunctional and deficient.”

“What has really happened in Peru the last few years is a total collapse of political parties and of politics as a profession,” said Steven Levitsky, director of the David Rockefeller Center for Latin American Studies at Harvard University. “There really are no political parties in Peru; they are all personal vehicles. Congress is very fragmented.”

In the case of Castillo, the president and Congress have been at virtual war since he took office in July 2021. Lawmakers alleged widespread corruption among his close advisors and his family. Castillo labeled such charges a political witch hunt.

The two sides “didn’t establish a minimal level of dialogue or trust,” Levitsky said. “It got to a point where both Congress and Castillo viewed this as, ‘Kill or be killed.’”

Castillo was ousted last week on Congress’ third move to impeach him. His effort to dissolve Congress was apparently a desperation maneuver to maintain power. It backfired.

Chaos and volatility have long roiled the political panorama in Peru, where civilian rule returned in 1980 following a dozen years of military dictatorship. Alberto Fujimori, a right-wing populist, was elected in 1990 and later dissolved Congress in a move he said was needed to battle hyperinflation and leftist guerrillas. The strongman-style leader was finally ousted in 2000 and later jailed, but corruption and other charges have marred the terms of most of his successors.

Peru has undergone “wrenching political U-turns” for decades, transitioning between military rule, democracy and authoritarianism — with little chance for political parties to evolve and mature beyond crass transactionalism, said Michael McKinley, a retired career diplomat who served as U.S. ambassador to Lima from 2007 to 2010.

“Democracy returned to Peru on the back of weak institutions … with political parties that never coalesced,” McKinley said, referring to the return of civilian rule in 1980.

Today, McKinley noted, “you have a system where congresses are in the mood to challenge presidents … and a judiciary [is] flexing its muscles.”

Adding to the discord, experts note, are the country’s deep social and geographic divides: Lima and the coastal regions have generally benefited from the government’s export-oriented economic policies of recent years, while the rural denizens of the Andes — including a large Indigenous population — have not seen much progress.

The COVID-19 pandemic hit especially hard in Peru, which experienced one of the world’s highest death rates and saw the cratering of an economy long sustained by commodity exports. Peru, a major mining nation, is the world’s second-largest exporter of copper, after neighboring Chile.

Castillo, a rural schoolteacher from the Andes whose broad-brimmed peasant hat became a signature feature, championed the underprivileged and ran under the slogan: “No more poor in a rich country.”

His message resonated in a nation where an estimated 70% of the economy is informal — meaning a large majority of people neither depend on, nor benefit from, the political system, and are generally alienated from it. Castillo, who was little known nationally before running for president, and had no broad political party base, emphasized his outsider status in a country where so many people feel left out.

“There is an underlying social challenge to any stability,” said Cynthia Sanborn, a political science professor at Lima’s University of the Pacific.

Peru’s political party structure, she noted, based on personalities rather than policies, beliefs or even ideology, can lead to a “free-for-all” at the ballot box.

Castillo emerged as one of two front-runners in 2021 national elections that featured a dizzying tableau of 18 presidential hopefuls. Castillo finished first in the crowded field, but he and the runner-up — Keiko Fujimori, daughter of the jailed ex-president, who is facing corruption charges and has spent time in jail — each garnered less than 20% of the vote.

Castillo emerged as the narrow winner in a runoff election. Keiko Fujimori — who repeatedly stated that Castillo would take the country down the road of communism — insisted that she had been cheated out of victory, drawing comparisons to former U.S. President Trump’s false assertions.

Without “forward-thinking politicians,” Sanborn noted, the system accomplishes little. “Peru never had a party system that has a minimum of stability or that represents the people,” she said.

From the day Castillo was elected, many were skeptical that he would complete his five-year term. He had many enemies and few allies. Once in office, critics say, his lack of experience and general incompetence helped doom his mandate. Scores of Cabinet ministers came and went.

One peculiarity of the Peruvian system is a constitutional clause that allows Congress to remove a president for “moral incapacity” if two-thirds of the 130 legislators agree. Critics say the legal definition of “moral incapacity” is extremely nebulous, leading to the rule being wielded as a political weapon — an especially potent one in a political context where presidents are typically newcomers who lack a foundation of party support. Castillo was ousted under the moral incapacity clause.

“That’s a very vague clause, but it gives Congress a huge amount of power,” said Jo-Marie Burt, a professor of political science and Latin American Studies at George Mason University in Virginia. “Congress has really contributed to the state of utter instability that Peru is subject to.”

The “moral incapacity” clause was also invoked by Congress in November 2020 to impeach President Martín Vizcarra, whose ouster led to violent street protests that forced the quick resignation of his successor, Manuel Merino. A caretaker president, Francisco Sagasti, then took the helm. He was the country’s third president in barely a week.

Once impeached last week, Castillo was arrested on charges of “rebellion” and transported to a police station, where he was photographed flipping through a magazine in front of a coffee table with a Chinese dragon atop it. Castillo joins at least three other former Peruvian presidents facing possible criminal prosecution.

Castillo’s representatives have denied any wrongdoing. Before his arrest, he reached out to Mexican President Andrés Manuel López Obrador about the possibility of obtaining political asylum in Mexico.

Castillo’s successor, Boluarte, 60, is a lawyer and a political neophyte. Doubts about whether she will be able to finish the final 3½ years of Castillo’s term seemed to overshadow her sudden emergence as Peru’s first female president.

The new president, who calls herself a moderate leftist and broke with Castillo when he tried to dissolve Congress, immediately called for “dialogue” and the installation of a government of “national unity,” acknowledging that Peru’s extremely polarized political climate has thwarted civil discourse.

“I’m asking for a political truce,” Boluarte told the country. “We need to have conversations, dialogue, reach agreements — something so simple but impossible in recent months.”

Castillo’s supporters have vowed to continue protests against his ouster, which they view as illegal. Others have taken to the streets to support his impeachment. But many Peruvians seem to view the country’s ongoing political drama as a sideshow that has little to do with the needs of its citizens.

“The last few years have been the same: One president after another,” said Martha Ramírez, 50, an accountant and single mother in the capital. “They all steal, and who ends up with real power? The richest. I have to work. I can’t think about all this. It’s bad for one’s health. … I’d rather concentrate on helping my daughter and her education.”