Inside Old Stamp House in the Lake District, the restaurant Tripadvisor says is the world’s best 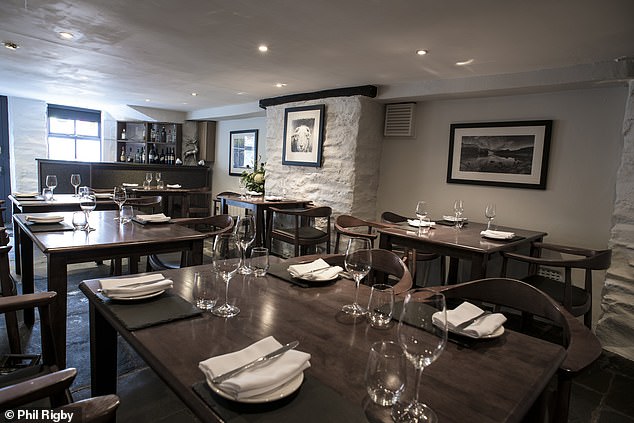 
As the taxi approaches the Old Stamp House restaurant in Ambleside, I wonder how much of it would be ‘the world’s best’.

This lauded Lake District eatery has been named the overall global winner of Tripadvisor’s Travellers’ Choice ‘Best of the Best’ Restaurants Awards for the past two years, garnering gushing tributes from almost every customer (1,334 ‘excellent’ reviews out of 1,477 at the time of writing).

Intriguingly, tantalisingly, its credentials as a world-beater don’t immediately present themselves, but percolate during the 10-course taster menu my chum Colin (a top wine merchant) and I enjoy, with a wine flight.

The Old Stamp House restaurant in Ambleside (above) has been named the overall global winner of Tripadvisor’s Travellers’ Choice ‘Best of the Best’ Restaurants Awards for the past two years. Ted Thornhill pulls up a chair and tries the £95 10-course tasting menu

The restaurant is housed in the building poet William Wordsworth used as an office when he was a tax collector, distributing revenue stamps.

It dates back to the year 1700 and the history is tangible – there are bumpy whitewashed stone walls and dark beams, but little else in the way of interior design, bar a few hung photos and paintings (including one of a Herdwick sheep, with which we become more familiar during course No.3).

Not that there’s much chance of being distracted – the wines are glorious and the dishes consistently superb, artistically presented with textures and flavours almost magically intertwined.

The £95 tasting menu is billed as a ‘Journey around Cumbria’ – and proves to be a wonderful showcase of the county’s terroir, if you will, with many of the ingredients sourced from the local area.

Next, it’s on to ‘The Fells’ and a dish made partly from the aforementioned photo subject called Herdwick hogget broth and bun. Herdwick is a species of sheep native to the Lake District and a hogget a lamb aged between one and two years old.

Ted’s roasted cod loin with crispy kale. It’s served with an ‘outrageously tasty sauce, concocted using a stock made from Cumbrian mussels and vermouth that’s finished with double cream and dill oil’. Ted adds that containing this is a circle of artichoke puree

Blackburn reveals that he sources his Herdwick meat from Yew Tree farm, just five miles from the restaurant.

For this delicious dish we’re presented with a little bowl of broth made from the stock of slow-cooked shoulder and Madeira wine seasoning, served with something approaching an optical illusion – brioche-style buns fashioned from braised shoulder meat wrapped in lamb fat.

Old Stamp House is stamping its world-class credentials on my taste buds – and we’re not even halfway through the menu yet.

Next, we’re off to ‘The Lake’ for a fish dish served with a soupcon of culinary wizardry – Arctic char.

Blackburn explains that while Windermere char, part of the trout family, is a true Cumbrian speciality, overfishing means it’s tough to get hold of.

So here he sources an ‘amazing alternative’ from a fish farm with ‘high welfare’ in Houghton Springs in Dorset and uses it to construct two little wonders.

Alongside this is potted char served in a brick pastry cylinder.

After scrumptious ‘beer bread’ made using Lost Wolf beer brewed by Unsworth’s Yard Brewery, located in the Cumbrian village of Cartmel, it’s on to ‘The Bay’ – hand-dived scallops with potted shrimps.

The scallops are from the Isle of Mull, the shrimps from Morecambe Bay, the dish descends from heaven.

The two key ingredients are combined with a superb ‘signature’ curry and honey mead sauce and a creamy cauliflower puree.

At this point in the proceedings I can see why the restaurant has a Michelin star. By the time I finish the next few dishes I’m left wondering why the inspector didn’t garland it with a second.

Roasted cod loin is next – ‘The Sea’ – and I just love this. Blackburn here cleverly juxtaposes soft, perfectly cooked cod – sourced from Hartlepool – with crispy kale, placed on top.

Then there’s the outrageously tasty sauce, concocted using a stock made from Cumbrian mussels and vermouth that’s finished with double cream and dill oil.

Containing this is a circle of artichoke puree.

Lake District 1 – MailOnline 0: TED THORNHILL tries to cycle his ‘dad belly’ up some of Britain’s most outrageous hill climbs. They look easier in the photos, he discovers…

It’s an aroma I’m not expecting amid the breathtaking ruggedness of the Lake District – burning.

But burning is what I can smell. And it would appear to be the disc brakes on my state-of-the-art Trek road bike. Probably because I’ve been manically squeezing them for the past two and a half minutes as I hurtle down one of the most outrageous cycling roads in the UK – Wrynose Pass.

It’s a road with sustained, ferocious gradients of up to 25 per cent – wild enough to weary the legs and lungs of even the fittest and lithest cyclists. On the way up it doesn’t just weary me – it defeats me. And so does the ‘warm up’ climb – Blea Tarn . I have to dismount on both hills to get my breath back.

I’m on an odyssey with my cycling chum Colin, and it’s tough from the get-go – pedalling through chaotic, Tube-strike rush-hour traffic between my home in South London and London Euston to catch an Avanti express train to Oxenholme Lake District, the gateway station to the Lakes and our mission – to conquer not just notorious hills such as Blea Tarn and Wrynose Pass, but a stretch of road reckoned to be one of the most challengingly steep in the country – the thigh-shredding, morale-shrivelling Hardknott Pass, which has gradients of up to 33 per cent spread over 1.38 miles (2.2km)…

Our tour is nearly over, with ‘The Forest’ the penultimate destination.

The deer is sourced at Cartmel Valley Game Supplies, with the animals coming ‘from various areas of the county [Cumbria], depending on where they manage to get them in the crosshairs’, says Ryan.

The final destination? ‘The Hedgerows’.

And from the hedgerows of Cumbria Ryan and his team forage ingredients for a brace of brilliant desserts.

The first is called Queen of the Meadow, which refers to the meadowsweet plant that grows wild in the area.

‘They look like white clouds floating in the hedges,’ says Ryan.

Here he dries them and uses them to flavour a mouthwatering mousse that’s finished with sheep’s yoghurt and decorated with a cute raspberry tuile shaped like a mini tree.

The second dessert tastes as good as it looks. And it looks wickedly delicious – an indulgent pear souffle dripping in chocolate. The waiter finishes the dish by pushing a locally foraged blackberry into the top (with a spoon – not his fingers!).

And still there’s more – a slice of chocolate delice on the side served with a coffee ganache and poached pear.

Colin and I agree – it’s a meal of praise-baiting pedigree and paired with ‘beautifully chosen’ wines, as Colin notes.

We opt for the former and it’s a palate-pleaser from start to finish.

We’re out of the blocks, naturally, with an aperitif – a satisfying glass of Leclerc Briant Champagne – then the quaffing baton is passed to the matched-wine list. First, we enjoy a silky Churton Pinot Noir from New Zealand, followed by a refreshing dry German Riesling, ‘Jacobus’ made by Peter Jakob Kuhn; an Austrian ‘skin contact’ orange wine by Judith Beck; a creamy white called ‘Fraga do Corvo’ made from Godello grapes by Spanish winery Grandes Pagos Gallegos; Orgo’s impressively plush Georgian Saperavi red; a fruity-sweet southern French Muscat de Rivesaltes from Domaine des Schistes, and to finish a mellow, late-harvest Vouvray from Sebastien Brunet.

Topping the proceedings off is perfectly seasoned jovial service that always comes with a sincere smile and a sprinkling of light banter.

Could the staff look a bit sharper sartorially? Maybe. It seems they’ve just been asked to wear black. Old Stamp House front-of-house uniforms (maybe hipster aprons with a Herdwick sheep motif?) might add some zest. Tis but a quibble, though. More importantly, the dishes and wines are described with genuine enthusiasm and there’s not so much as the slightest hiccup between arriving and swallowing the very last drop of Vouvray.

My taste buds have been caressed, massaged and spun around by a parade of creations conjured up by a culinary alchemist who transforms everyday ingredients into gold-standard dishes.

But is the Old Stamp House the world’s best restaurant? Tripadvisor’s AI says it is. And until I’ve tried them all – I’m not going to argue.

PROS: Dishes that are memorable, inventive, winningly whimsical and sometimes breathtaking. Super service. Great wine list. The price – £95 – represents excellent value for a tasting menu of this calibre. If you’re a foodie – this is a non-negotiable visit.

CONS: Can be difficult to get a table! Book (very) early.

The UK’s top 10 most welcoming towns revealed, from Kirkwall to Cleethorpes

A cosy hotel, an epic waterfall, stunning castles: A joyous exploration of the North Pennines