Karen Bass will make history as L.A. mayor. Then the hard work begins 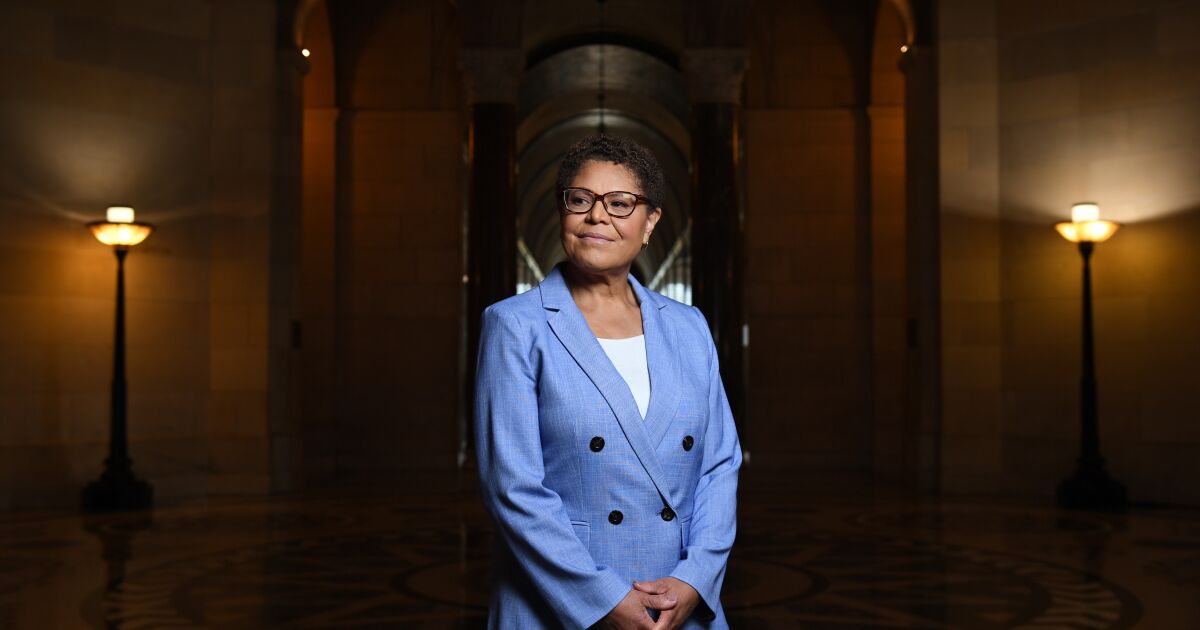 When Karen Bass is sworn in Sunday, she will make history as the first woman to serve as mayor of Los Angeles — completing a political journey that took her from South Los Angeles community organizer 30 years ago to elected office in the Legislature and Congress, then to the top job in the nation’s second-largest city.

She will take the oath from Vice President Kamala Harris, joining a political wave that has placed a record six women on the City Council and given L.A. its first female city attorney. This history comes as women continue to hold all five seats on the county Board of Supervisors as well.

“There were so many years when the City Council was all men,” she said in an interview Friday. “Any time I think of the historical nature and all of that, it just makes me feel the additional responsibility. I have a responsibility to perform for the city as a whole, but I also know that girls look up to me.”

But when Sunday’s inauguration festivities give way to Monday’s workday, the difficult task of leading a city swept up in change begins in earnest. Homelessness is the most pressing issue for most residents, and has occupied most of Bass’ pre-inauguration attention.

Last week she appointed Mercedes Márquez, a former local and federal housing official, as her chief of housing and homelessness solutions. Márquez reports directly to Bass and will hold broad sway over facilitating the construction of affordable housing and interim housing, and helping to get people off the streets.

These responsibilities had previously been divided among multiple officials, with no single person accountable.

“My phone has been ringing off the hook,” Soboroff said. Many were calling to congratulate him on being named a transition team honorary co-chair along with four others, he added, and some also asked about jobs.

“I tell them to fill out the form,” Soboroff said.

The transition advisors include experts in economic development, the environment, transportation and other areas. But most of Bass’ attention has gone to the homelessness experts.

She has met with some of them multiple times — seeking out their advice as she formulates a strategy to address street homelessness and speed up the production of housing.

The former congresswoman has said that her first move as mayor would be to declare a state of emergency, which the City Council would have to authorize every 30 days.

That will likely come Monday.

It’s unclear exactly what the emergency order will say, but people involved in the planning say the goal is for the mayor to centralize power and authority in responding to the homelessness crisis in a way that has both a political and practical effect.

It gives her some flexibility to divert resources and staff to areas where she sees fit, speed up the procurement and land use processes as well as potentially commandeering property if she wants.

“This is an incredible opportunity to speed the pace with which we build affordable housing — which is what we need, “ said Stephanie Klasky-Gamer, head of the nonprofit LA Family Housing and a transition advisory team member.

For her part, Bass is keenly aware of the political risk that comes with focusing so squarely on homelessness out of the gate. The inability to show progress could hamstring any momentum or mandate that came from winning by nearly 10 points over developer Rick Caruso, who outspent her by tens of millions of dollars in the campaign.

“I realize that I’m taking a huge risk,” she said. “I realize it could fail. But you gotta do something.

Bass’ broader homelessness plan will be called “Inside Safe,” which will seek to speed the process by which interim and permanent housing gets built in the city. It will also aggressively target large encampments that have been a constant source of frustration for residents.

Her advisors have been asking city agencies, nonprofits and council offices for the locations where encampments have sprouted up and are populated with people who are desperately in need of help.

They have been examining where these people could go at least on a temporary basis — contemplating more hotel conversions, master-leasing of buildings and extending the homeless-housing operation of the nearly 500-room L.A. Grand Hotel downtown.

“The idea is to have outreach workers having conversations with people in the encampments and actually have somewhere for them to go,” said Councilman Marqueece Harris-Dawson, a close ally of Bass who succeeded her in running the nonprofit Community Coalition, which she co-founded.

“I got a sneak peek at the list … and I’m seeing dozens of occupants and tens of RVs” in the encampments that the Bass administration will first focus on, Harris-Dawson said.

One hope from some elected officials is that Bass’ team can centralize and support some of the time-consuming work many council offices already do on homelessness, such as outreach to unhoused people, finding locations for housing and helping shepherd projects through the labyrinth of approvals that must occur.

Councilmember-elect Katy Yaroslavsky, who takes office this week in a Westside district, said she is open to the idea of an emergency declaration on homelessness, if it ensures that new housing can be constructed more quickly for the city’s neediest.

“We all need to be willing to do whatever needs to be done, even if it means giving up some authority,” she said.

Los Angeles voters approved a tax to fund housing last month, demonstrating a political will to invest in solutions.

Still, elected officials and advocates are keenly aware that Angelenos’ patience is wearing thin. It’s why the initial focus on finding a way to move people off the street in a way that’s humane is so important to Bass.

Councilmember Nithya Raman said multiple members of her staff are devoted to the slow work of helping homeless people move out of encampments and facilitating the purchase of a hotel that will be used for homeless housing.

“A focus on encampments is important. People are struggling on the streets,” Raman said, adding that she thought Caruso’s message of cleaning up the city with more cops and shelter beds resonated with many voters because they question government’s ability to address the crisis.

“I think also making sure that we’re doing the work to get people housed through an encampment-to-home approach can also inspire trust and confidence from surrounding neighborhoods in the capacity of government and can spur residents to trust government,” Raman said.

Thinking about the weight of what’s before her is where Bass’ mind drifts. As she grew up in South L.A., her father — a postal carrier — ignited her interest in politics. They’d listen to the news at 4:30 a.m. most days before he began his route. The passion only deepened when, at 14, she stuffed envelopes and knocked on doors for the presidential campaign of Sen. Robert F. Kennedy.