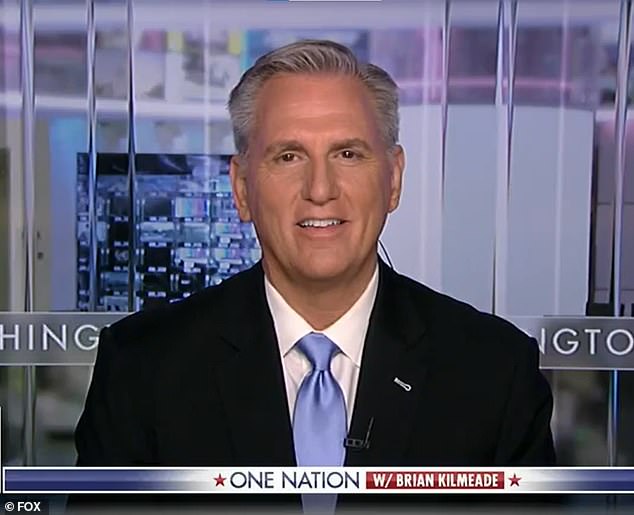 
House Republican Leader Kevin McCarthy said that as Speaker of the House, he would issue subpoenas for the 51 intelligence officials who signed a letter weeks before the 2020 election claiming the Hunter Biden laptop story looked like Russian disinformation.

During a Fox interview over the weekend, McCarthy – who will likely become the lower chamber’s next leader – said Republicans, under his leadership, will ‘bring the (the intelligence agents) before committee’ and ask them ‘why did they lie to the American public?’

‘Those 51 intel agents that signed a letter that said the Hunter Biden information was all wrong – was Russia collusion – many of them have a security clearance,’ he said.

‘Why did they sign it?’ he asked. ‘A Clapper, a Brennan? Why did you use the reputation that America was able to give to you more information, but use it for a political purpose and lie to the American public.’

Former first lady Michelle Obama was among those who publicly called for Trump’s Twitter account to be ‘permanently‘ banned in the immediate aftermath of the January 6 Capitol breach.

Following Elon Musk’s recent takeover of the platform, Trump’s access to Twitter has been returned though he has yet to use the site.

The letter, released just 15 days before the 2020 election, sought to clear the Bidens of any unflattering information that was found on the laptop and further suppress the story

In the more than two years since the dissemination of the letter claiming the Hunter laptop story looked like Russian disinformation, none of the intelligence agents who signed it have come forward to admit error

In 2020, weeks before the election that pitted current President Joe Biden against Donald Trump, 51 former intelligence officials signaled to the public that material from Hunter Biden’s laptop published in the New York Post had ‘all the classic earmarks of a Russian information operation.’

The information on the laptop, which was not seen or reviewed by any of the intel officers prior to the signing of the letter, was not Russian disinformation and has since been vetted by most of the nation’s top outlets.

That, however, didn’t stop the officials from signing a letter that said the ”laptop op’ fits the bill, as the publication of the emails are [sic] clearly designed to discredit Biden … It is high time that Russia stops interfering in our democracy.’

In the more than two years since the dissemination of the letter, none of the intelligence agents who signed it have come forward to admit the error.

For that reason, McCarthy and the Republican party in Congress feel an ongoing commitment to speaking to the signees before a committee.

McCarthy’s latest promise arrives in the wake of the fourth installment of the Twitter Files, which were released by journalist Michael Shellenberger on Saturday evening.

Twitter infamously banned the Hunter Biden laptop story from circulation and locked certain accounts that attempted to share it.

In the latest drop, Shellenberger revealed how the Twitter executive team pushed to change the platform’s rule system in order to justify removing then-President Trump following the January 6 Capitol breach.

Senior executives at Twitter, including former Head of Trust and Safety Yoel Roth,  ‘create[d] justifications to ban Trump,’ attempted to ‘seek a change of policy for Trump alone distinct from other political leaders’ and ‘express[ed] no concern for the free speech or democracy implications of a ban,’ wrote Shellenberger.

The Removal of Donald Trump: January 7

As the pressure builds, Twitter executives build the case for a permanent ban

He went on to claim that just one junior employee at Twitter expressed concern about mitigating the freedom of speech of the President of the United States and that more senior executives appeared willing and eager to finagle the site’s regulations until a Trump ban was possible.

A Twitter Files dump from Friday showed the internally confused conversations occurring at Twitter as Roth met weekly with the FBI and other intelligence agencies in the lead-up to the 2020 election.

Earlier this week, the White House, via Press Secretary Karine Jean-Pierre, weighed in on the ongoing controversy to say that it is ‘not healthy’ for Twitter to be releasing internal communications that showed Twitter suppressed the bombshell laptop reporting that showed Hunter Biden trading on his last name for cash.

In the inaugural installment of the Twitter Files, released by independent journalist Matt Taibbi, communications showed that the Biden campaign did ask Twitter to remove some nude photos and videos Hunter had left on his laptop that were being circulated.

Evidence indicated that the Biden campaign had requested Twitter remove the post that violated its non-consensual nudity policy which prohibits ‘images or videos that are taken in an intimate setting and not intended for public distribution.’

The Trump White House had also contacted Twitter asking to have the company review or remove some tweets, Taibbi claimed without offering additional details.