Korea Fund (KF): How To Invest In The Korean Stock Market As It’s Poised To Rise In 2023 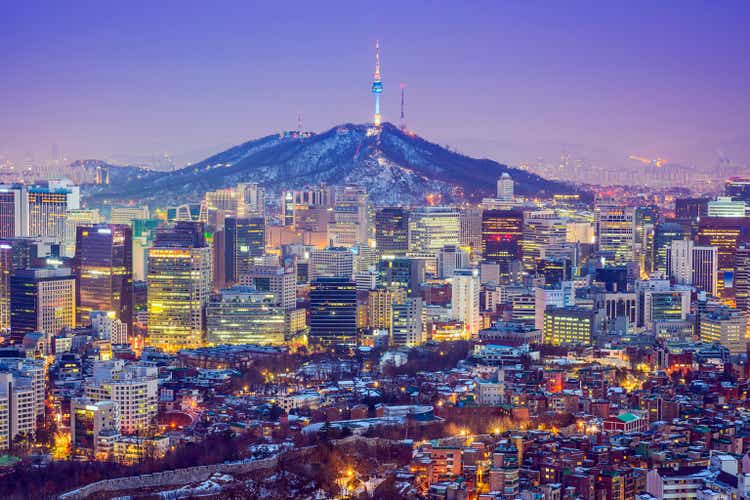 
Korea fund history and past performance

The Korea Fund (NYSE:KF) history goes back decades; however, it has been a long time since it could be regarded as successful. The since-inception returns figures are boosted from higher returns achieved way back more than a decade ago. Absolute returns have been poor in the last decade, barely in positive territory.

That in itself does not lead me to give the Korea Fund a miss. Markets can often move in decade long trends. For instance, the first decade of the 2000s saw emerging markets do relatively well. The 2020s could see a repeat now that valuations in markets like South Korea have become compelling.

As the performance numbers suggest below, I wouldn’t expect the fund to deviate substantially from the benchmark they track. The holdings are fairly similar to the iShares MSCI South Korea Capped ETF (EWY).

With the Korea Fund though, we have the potential for the discount to NAV to contract. Its past performance history is reasonable in a relative sense. This makes it attractive enough to overcome the higher expense ratio of 1.1% that comes with it.

If over the next couple of years, the fund underperforms its benchmark, well-cushioning the downside risk would be the ability to tender 25% your shares at very near the NAV. That is some way that can let you bridge the current large value gap between the share price and NAV. I will discuss this aspect further down in the article.

Korean stock market crash and can it recover in 2023?

Up until late October at least, stock markets like South Korea (that are sensitive to news surrounding China’s zero Covid policies), were amongst the hardest hit in 2022.

The following factors have acted as headwinds for prominent listed South Korean companies this year.

Over the last couple of months, we have seen China relaxing Covid restrictions. South Korea was already loosening Covid restrictions much earlier in the year, but strict measures in the first few months of 2022 had held the economy back. This bodes well for the above headwinds to fade away throughout 2023. Inflationary pressures stand a good chance of subsiding in 2023.

I acknowledge that part of this has already been factored in by the sizeable bounce in stock markets like South Korea’s since the bottom in late September. Bearing in mind, however, the magnitude of underperformance seen in recent years, combined with extremely low valuations, we are likely still early in this positive re-rating trend. The significant weaking of the Korean won in 2022 can also assist them eventually arrest an export slump they are in.

Below are some valuation statistics of the Korea Fund. The headwinds to Korean stocks that I mentioned earlier may still lead to some shorter-term pressure on company earnings. Even if we take the forecasted P/E ratio though, stocks still look exceptionally cheap. Price to book ratios of under one are also historically very cheap.

The market also looks to standout as cheap when comparing across Asia.

Korean stocks are a significant component of the MSCI Emerging Markets Index representing around 12%. EM equities are poised to be on global investors’ radar again now that the narrative around China’s Covid policies has shifted notably in the last couple of months.

This global equity valuations twitter thread from earlier this month is a good discussion on the temptation for global investors to now want to overweight EM from a valuation point of view.

The chart just above shows how EM markets outperformed in the early 2000s, and this also coincided with very strong returns for the Korea Fund back then. Are we about to see a repeat of this experience?

The gap between the valuation line of EM versus USA stocks still looks extremely wide – not unlike how it appeared in the early 2000s. Historically, we can point to many occasions of markets moving in decade long trends.

When we examine the performance of the MSCI Emerging Markets Index, we can see how in the last decade EM has not been the place to be.

Yet when we look at forward P/E ratios in the above table, at the present time we get to potentially enter EM equities at far more favorable valuations. Breaking that down further as I noted earlier, the Korea Fund has a forward P/E ratio of 9 times, so thus represents one of the cheapest countries within the EM Index.

For what it is worth the often much discussed 7-year asset class forecast from GMO also imply the 2020s might end up being the decade for EM equities. Note that the below table is expressed as real return forecasts.

A Korean Fund run by a value orientated fund manager should mean we are hunting in the right pockets of value across global markets at the present time.

One fair criticism and argument against investing in the Korean stock market surrounds corporate governance history and treatment of minority shareholders. It is not uncommon for cheap stocks to remain cheap or be labeled “value traps” because majority shareholders for example run “lazy” balance sheets and don’t look after smaller shareholders.

The following article on shareholder activism trends in South Korea explains some of the historical problems. Importantly however, it also discusses clear structural changes in regulations there which are resulting in an increasing number of activism campaigns in order to unlock value.

Turning back to the Korea Fund in particular, as shown below the discount to NAV has hovered around the 15% mark over the last couple of years.

Some prominent shareholders of the fund include City of London, Lazard, and 1607 Capital Partners. They know the closed-end fund sector well and would be keen to ensure the discount contracts rather than continue to widen. Further down on the shareholder list with albeit much smaller holdings are Saba Capital Management and Bulldog investors, two notable activists in the CEF space.

Such a backdrop has likely played a role in the Korea Fund announcing in 2020 a scheme to make a tender offer for 25% of shares, if the fund underperforms in the three years leading up to 2024. Furthermore, the announcement notes that the scheme resets and applies thereafter on each third-year anniversary of September 30, 2024.

Whilst they have a share buyback in place, the amounts they have bought have been minuscule in the last couple of years. I wouldn’t be surprised if more pressure is placed on the board for them to get more active in executing the buyback on market, which would be positive for the shares.

When many investors think of the stock market in South Korea, Samsung Electronics (OTCPK:SSNLF, OTCPK:SSNNF), would quite rightly be at the forefront of their mind. Given the Korea Fund has a huge weight in the stock (23%), the company deserves at least a brief discussion of it on its own.

The bears on the stock may cite likely slowing global growth outlook to weigh on them through most of 2023. The company however recently said it sees light at the end of the tunnel, and that chip demand may recover in late 2023.

That might seem a long way off to some, but Samsung is such a quality company over the long term I would not get overly fixated on short term timing about when the shares may bottom out. We know that stock markets are a discounting mechanism, so now could well be the time to position for a recovery. Samsung’s PE ratio and forecast PE ratio for 2023 are quite similar to that of the overall Korean stock market and the Korea Fund top-down statistics.

Risks of the Korea Fund

The main risk I see is simply if much of the globe slips into a prolonged recession in 2023. The Korean economy and its stock market are quite sensitive to this as it is an export-led economy with key links to the world’s largest trading partners. China as I have discussed is very important in this regard and although I have mentioned recent developments have been promising, a high level of uncertainty still remains.

On a fund level the small fund size is far from ideal. Both in terms of resulting in lower liquidity, but also this means the expense ratio will be hard to reduce in the future.

The Korea Fund has already had a significant bounce from the lows of a couple of months ago, but I would argue we are relatively early on in a longer-term positive re-rating. The recent short-term improvement is warranted given the backdrop of China’s easing of Covid restrictions and how important trade with China is.

We are still left with exceptionally cheap valuations and the latest bounce in the share price is looking like a catalyst for a good 2023. I plan on taking a long position soon and see it as an efficient fund to accumulate for exposure to the Korean stock market.

Whilst being wary of the market being labeled as a bit of a value trap, the trends in shareholder activism tilt the odds further in your favor here. I am referring to the activism trends in the Korean stock market as a whole that I discussed earlier. I also see the potential for activism pressure on the Korea fund itself to be a positive share price catalyst.

Editor’s Note: This article was submitted as part of Seeking Alpha’s Top 2023 Pick competition, which runs through December 25. This competition is open to all users and contributors; click here to find out more and submit your article today!

Share
Facebook
Twitter
Pinterest
WhatsApp
Previous article
Saira Banu recalls how she’d wait for Dilip Kumar to open eyes in his final days: ‘When he did, it was like Eid for me’
Next article
New parents Ranbir Kapoor and Alia Bhatt are all smiles as they pose with their fan. See pic
- Advertisement -