‘Little kids were starting to cry’: Inside the Kevin de León fight at Christmas gift giveaway 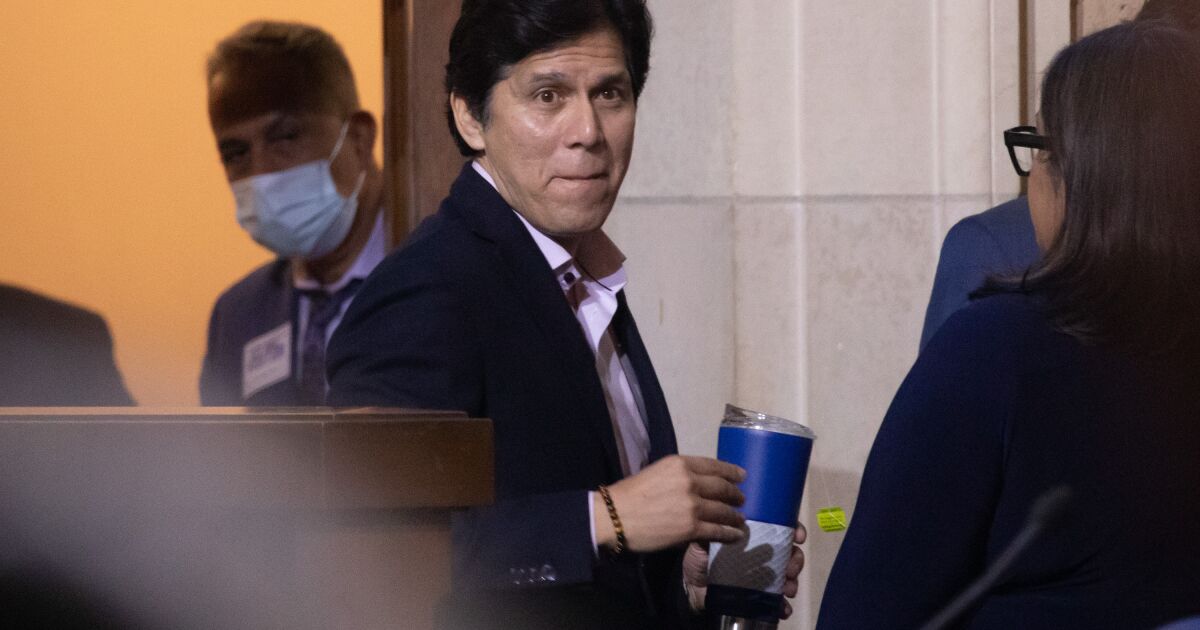 The fight between embattled Councilman Kevin de León and an activist Friday night has heightened the simmering tensions in L.A. politics over the leak of racist audio that has rocked City Hall.

De León — the only of the three council members on the recording to still be in office — has sparked protests outside his home and at City Hall.

What happened Friday night at a holiday gift giveaway in Lincoln Heights took matters to another level.

It occurred in front of neighborhood children who gathered for what was supposed to be a festive party. Many kids were upset by what they saw.

What happened at the event?

A video posted on Twitter on Saturday by RootsAction shows activists walking alongside De León inside the event calling on him to resign. Jason Reedy, an organizer with the People’s City Council, stands in front of De León, holding his phone in the councilman’s face. When De León reaches a door, someone pushes Reedy out of the way.

The video shows De León going through the door into a back room and trying to close it. Reedy follows him, and the councilman appears to push him back. Reedy, holding his arms up, stands nose-to-nose with De León as others mob the pair. There’s a brief struggle, then De León grabs Reedy, throws him into a table and attempts to push him out of the room.

What did the DJ see?

Alan Ochoa, 36, was DJing the event when he said about five people walked in and started shouting “you’re a racist” at De León.

Ochoa, who grew up in Lincoln Heights, said he doesn’t watch the news and hadn’t been aware of the controversy with the leaked audio.

De León was on the stage to give out toys to children when everything started. Ochoa said De León left the stage and tried to walk away but that the group started “getting into his face.”

“These little kids were starting to cry and scream, and that’s when reality hit,” Ochoa said. “He was walking away, but these guys did not let him walk away. They were just in his way.”

The DJ said he and his employee got involved after children started crying and running away.

“Once the kids get involved, that’s a big no-no,” he said. Ochoa said he helped push the group from the auditorium.

“If you’re going to be proving your point, do it outside. Don’t go in there and mess up a whole community event,” Ochoa said. “As it is, we live in a low-income community, and these guys are coming here who don’t even live there, messing it up for our community.”

There is still much dispute over exactly what happened.

In a statement, De León said that he, a staff member and a volunteer were “violently and physically assaulted by self-proclaimed activists at a community holiday event to the dismay of a multitude of families and children who were there to celebrate a Christmas tree lighting and to receive toys and food.”

“Video footage clearly shows him and his supporters initiating this assault while Mr. Reedy stands prone,” Rahman said. “Not only has Kevin de León lost all political legitimacy, his claims that he was the one attacked here simply underscores how he’s lost touch with reality.”

What is this all about?

De León, a former state Senate leader, has been at the center of a political maelstrom set off by a leaked recording first reported by The Times on Oct. 9.

The October 2021 recording captured a closed-door conversation among then-City Council President Nury Martinez, De León and Councilmember Gil Cedillo, and Ron Herrera, the leader of the Los Angeles County Federation of Labor. The local powerbrokers were ostensibly meeting to discuss the proposed redistricting maps of the city’s 15 council districts, but the conversation included racist and derogatory remarks about Black, Jewish, Armenian, Indigenous and gay people.

At one point, Martinez — who has since resigned from the council — said Councilman Mike Bonin, who is white, handled his young Black son as though he were an “accessory” and described the boy as “Parece changuito,” or “like a monkey.” Herrera has also resigned from his influential post.

De León has repeatedly apologized for his participation in the meeting, describing the handbag comment as a joke directed at Martinez’s “penchant for having luxury accessories” and saying he should have intervened at various other points in the conversation to put a stop to the racist remarks.

Martinez resigned, and Cedillo left the council when his term ended.

But De León has said repeatedly that he has no plans to step down, citing the need for representation in his downtown and Eastside district. He was elected to the council in 2020 and has more than two years left in his term.

It’s relatively easy to launch a recall attempt in California, but triggering an election is far more difficult. Most attempted recalls fail to make it to the ballot.

Under city rules, recall backers must start the process by submitting a 300-word statement signed by five voters within the district. Several other procedural steps have to be completed within a certain timetable before signature gathering can begin.

On Tuesday, the recall was cleared to gather signatures.

De León showed up for a Los Angeles City Council meeting on Friday, triggering an uproar from his critics and supporters in the audience. It was the first time he’d been in council chambers since he leak became pubic.

When the council meeting resumed, De León did not return.

In a statement, the councilman said he returned to council chambers on Friday to represent his constituents, especially monolingual Spanish-speaking residents. Some of those Spanish speakers called into a council committee meeting on Thursday, only to find that bilingual translation services were not available.

“I remained out of the room after the outburst by agitators to give the council president the opportunity to regain control of the meeting and allow public comment to continue since so many of those present were my constituents,” he said. “Unfortunately, neither of those things happened.”