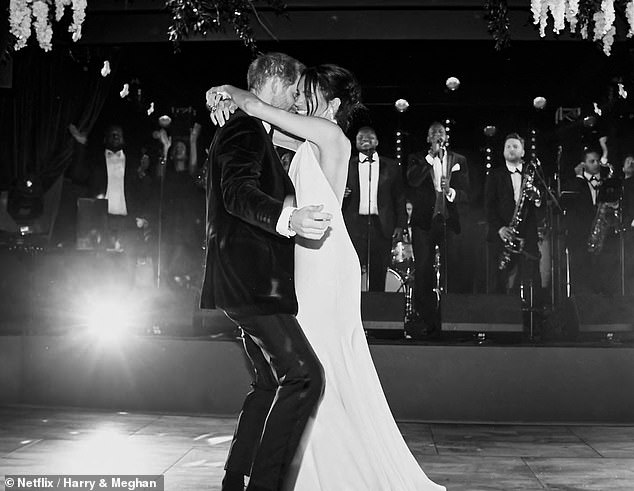 
‘Is it SONG of a Thousand Dances? I can never remember!’: Moment Meghan FORGETS the name of her wedding song in new clip from Netflix series… so do YOU know what it’s called?

By Katherine Lawton For Mailonline

Meghan Markle forgot the name of her first wedding dance song with Harry in new footage released by the couple in their Netflix trailer.

The pair appear to be madly in love in the first glimpse of volume two of Harry and Meghan as they reminisce about their wedding day in May 2018.

Watchers are treated to never-seen-before photos of the couple on the dance floor and sharing the evening with friends and family.

But as the pair talked to the camera, Meghan initially forgot the name of the song they used for their first dance as they discuss the track and the lyrics in the 38-second clip.

Meghan turns to Harry as she asks the name of their wedding song. She initially calls it ‘Song of a Thousand Dances’

Meghan said: ‘I just really wanted the music to be fun.’

Then she asks Harry: ‘Even our first dance. Song of a thousand dances? I always get it wrong,’ before singing a few of the lyrics such as ‘Mashed potato, do the alligator’.

Afterwards, the trailer plays the first line of the tune – Land of a Thousand Dances, by Wilson Pickett – as it skips through a plethora of photographs from the dance, including one the Duchess of Sussex dancing with A-lister Elton John and another actor from Suits, Abigail Spencer.

The  trailer plays the first line of the tune – Land of a Thousand Dances, by Wilson Pickett – as it skips through a plethora of photographs from the couple’s first dance

‘That was out first dance,’ said Meghan. ‘It was so fun. Just spinning like a whirlwind was so great.’

The clip was released amid the fallout over the first three episodes, which were released at 8am on Thursday morning.

The couple have since received criticism over the series for attacking British institutions as they discussed their experiences – including racism.

Harry and Meghan got married in May 2018. They have since stepped back from the royal family

On January 8 2020, the Sussexes revealed that they intended to ‘step back as ”senior” members of the royal family and work to become financially independent’.

Meanwhile, on Thursday fans of Prince Harry and his wife Meghan, Duchess of Sussex, praised the couple for being so clearly in love after witnessing the first three episodes of their much-anticipated Netflix show.

They went on social media to gush over the behind-the-scenes footage of the couple’s romance and never seen before photographs.

The documentary series, which will see three more episodes drop next Thursday, reveals the real love story of how the pair met and fell in love.

This is the first time the couple have publicly acknowledged which song they chose for their first dance.

Initial reports suggested it was Whitney Houston’s hit I Wanna Dance With Somebody, after Meghan referred to it as her ‘happy song’ in a 2016 magazine interview.

It comes amid a deepening row over the release of the couple’s Netflix series, with sources saying the Prince of Wales is unlikely ever to make up with his estranged brother following his Netflix betrayal.

William is said to be angry about the disrespect he feels Harry showed to their grandmother when she was alive during the Megxit saga.