NYPD resignations shoot up by 30% as 1,225 officers ditch the US’s biggest police force 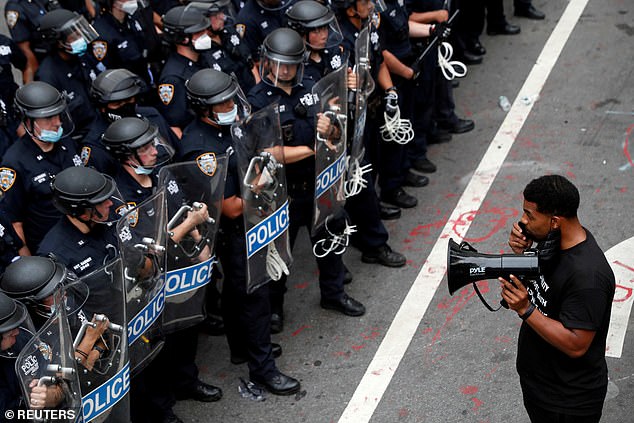 
Thousands of New York City police officers have ditched the country’s biggest police force and fled to other states for higher salaries.

Police department recruiters from other states, including Florida and Colorado have rushed to the Big Apple to persuade some of the city’s 34,000 officers into relocating in exchange for higher pay and better work environments.

The retention rate among NYPD officers is rocky, especially since 1,225 officers have resigned through November before reaching five years at the police force, according to the New York Times. About 3,200 total have left this year, including retirees.

NYPD is experiencing its largest exodus since 2002 as salaries and increased hours appear not to be enough.

About 3,200 cops have left the NYPD this year through November

Some officers have flocked to the sunny state of Florida to receive a guaranteed sign-on bonus of $5,000 and funds to further their education at a state police academy.

Spero Georgedakis, a former Miami officer who now works to assist in cop relocation, recently posted a television ad for $20,000 per month to persuade NYPD cops to relocate to Florida, according to the news outlet.

Spero Georgedakis, a former Miami officer who now works to assist in cop relocation, previously set up a TV ad to recruit cops in New york

The number of states advertising to New York officers is unclear, but generally, recruiters lead with higher pay and more benefits.

‘We don’t want to deplete New York City of their officers,’ Georgedakis told the news outlet. ‘But police are needed everywhere, and we want them to choose Florida.’

Amid the ‘defund the police’ and George Floyd protests, about 9,400 have left the NYPD since 2020, according to the news outlet.

Full-year statistics released to DailyMail.com in June showed that 3,152 officers left the force in 2020, meaning that the pace of retirements this year is only slightly higher. There were far fewer departures in 2021, with 2,689 officers exiting.

Dan Oates, Chief at the Aurora Police Department in Colorado, flew to New York in August to convince officers to fill one of the 50 vacancy’s in the state’s police force.

Oates persuaded 14 officers in the NYPD to move to join his department – which is about 50 miles outside of Denver.

The Aurora police chief used to work as the deputy chief for the NYPD before settling in Aurora.

‘I feel bad raiding my home agency,’ Chief Oates told The Times. ‘But frankly, it’s a cutthroat environment right now among police chiefs to recruit talent, and we desperately need it.’

Crime in New York City has been running rampant, up overall by 31.8 per cent on last year, with robbery up a shocking 35.5 per cent

The number of recruits leaving The Big Apple might be due to the increase in crime and the greater need for patrol.

As of mid-November, overall crime is up 29.1 percent in New York City from last year, with felony assaults, rapes, and robberies all up double digits. Murders are down 14.8 percent and shootings are down 12.5 percent.

Felony assaults are also up nearly 14 percent, with police recording 22,319 cases so far this year, and rapes have increased by nearly 11 percent.

Murders and the number of shooting victims were down 14.4 and 13.6 percent respectively.

The city’s transit system appears to be bearing the brunt of surging crime, with about 1,865 reports so far in 2022, a 41.7 percent spike from last year.

Last month, Mayor Eric Adams said the NYPD would double the numbers of officers patrolling the subway system. Adams is seen with Officers Taufique Bokth, left, and Brunel Victor who saved the life of a man who collapsed on subway tracks on 116th Street Station in Harlem

So far this year, there have been nine murders in the subway, compared to six in 2021, according to newly released data.

At least twelve people have been shoved in front of a subway train so far this year, at least two fatally.

But when compared to pre-pandemic levels, crime rates are now shockingly high with subway killings at their highest level in 25 years.

It is precisely because of such violence on the transit system that saw Mayor Adams move to deploy more police officers underground, with New York State even footing the bill for overtime paid.