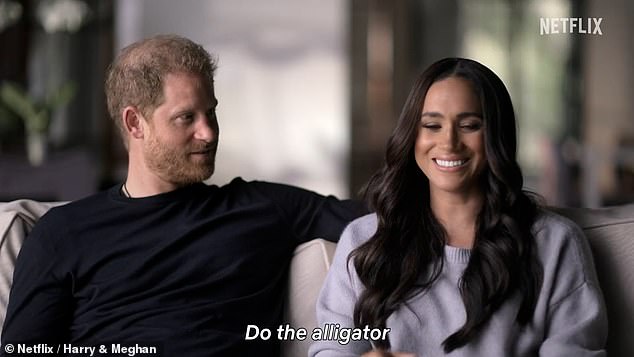 
Prince Harry is said to have been ‘delighted’ to see the first three episodes of his Netflix docu-series air this week and has ‘absolutely no regrets’, despite facing criticism from many in Britain.

A close friend of his late mother, Princess Diana, told the Mirror that the Duke of Sussex hopes his brother Prince William and father King Charles will watch the series to get a better idea of what he and Meghan have had to go through.

The source told the paper: ‘Harry is delighted with the narrative of the documentary and how he and Meghan came across.

‘The reason for doing this was to share their truth on their lives. He feels it told the story he wanted the world to hear and has absolutely no regrets.’

Prince Harry is said to have been ‘delighted’ to see the first three episodes of his Netflix docu-series air this week and has ‘absolutely no regrets’. Pictured with Meghan in the latest trailer

Harry is also reportedly still hoping that he can make ‘some kind of peace’ with the rest of the Royal Family, despite many thinking that the series has only made any chance of reconciliation less likely.

William is said to be angry about the disrespect he feels Harry showed to their grandmother when she was alive during the Megxit saga.

And sources believe the bombshell documentary – which it is understood the heir to the throne has not watched, but is likely to do so at some point – will do little to change his mind.

He is also said to be distrustful of Harry’s motives given that he has a book coming out early next year.

‘All relationships are built on trust but for members of the Royal Family, who live their life in the spotlight, doubly so,’ a friend said.

‘The prince is a very private man and what Harry is doing is the anathema of everything he believes. On that alone, many believe it is unlikely he will ever be able to repair his relationship with them. Too much water has gone under the bridge.’

After Meghan recalled her awkward first meeting with William and Kate in episode two, Harry again seems to snub his brother in the trailer for the second volume by failing to include the Prince and Princess of Wales in any of the plethora of wedding pictures that flashed up on the screen.

The new trailer, released today, shows a series of unseen photos of the couple dancing at their 2018 wedding with VIPs including pop legend Elton John and Suits actor Abigail Spencer.

But in an apparent snub, none of the images from the lavish reception at Windsor Castle include the groom’s brother, despite the fact that Prince William served as best man at the wedding, in a break from tradition.

The couple are pictured at their wedding with Sir Elton John, who was a friend of Princess Diana and performed at her funeral

Prince Harry pictured with a group of male friends during his wedding reception in 2018. Despite their previous close relationship, Prince William does not feature

In a clip about the 2018 reception Meghan said: ‘I just really wanted the music to be fun. Even our first dance.’

She turns to her husband and asks: ‘Song of 1,000 Dances? A thousand dances? I always get it wrong.’

The duchess sings lyrics from the 60s soul hit Land Of A Thousand Dances, which the couple chose for their first dance.

It is the first time the couple have publicly acknowledged which song they chose for their first dance.

Initial reports suggested it was Whitney Houston’s hit I Wanna Dance With Somebody, after Meghan referred to it as her ‘happy song’ in a 2016 magazine interview.

The clip was released amid the fallout over the first three episodes, which were released at 8am on Thursday morning.

The couple have since received criticism over the series for attacking British institutions as they discussed their experiences – including racism- and almost half of Britons are arguing that the Duke and Duchess of Sussex should be stripped of their titles as a result.

A survey by the Mail on Sunday found that 44 per cent of people think that they should lose their titles, while only 19 per cent disagreed.

And royal insiders have been left particularly upset by the Netflix programme’s criticism of Queen Elizabeth and her Commonwealth legacy, which was dismissed as ‘Empire 2.0’.

One source pointed out that Harry and Meghan previously served as president and vice president of the Queen’s Commonwealth Trust, which supports youth empowerment in Commonwealth countries, and had been happy to be associated with it ‘until they quit their jobs to make money’.

The new trailer, released today, shows a series of unseen photos of the couple dancing at their 2018 wedding

Rift: Harry and William during the unveiling of a statue of their mother, Princess Diana, at Kensington Palace last year

They also feel the Sussexes’ decision to secretly record 15 hours of video diaries, which they handed over to the documentary-makers, was an ‘appalling’ betrayal of trust. They started filming in March 2020 – almost 12 months before they officially stepped down as senior working royals.

‘Harry has made a virtue of protecting his grandmother through the whole of this saga –repeatedly making the point about how much respect he had for her and ruling her out of his claims about racism. And yet this is what they were planning the whole time? It’s appalling,’ another source said.

The duke and duchess signed lucrative deals, thought to be worth more than £100 million, with Netflix and Spotify after quitting as working royals.

In the first three episodes of the six-part series, Harry has accused the royals of having a ‘huge level of unconscious bias’ and colluding with a media that wanted to ‘destroy’ Meghan, as well as slighting his father and brother about their choices of bride.