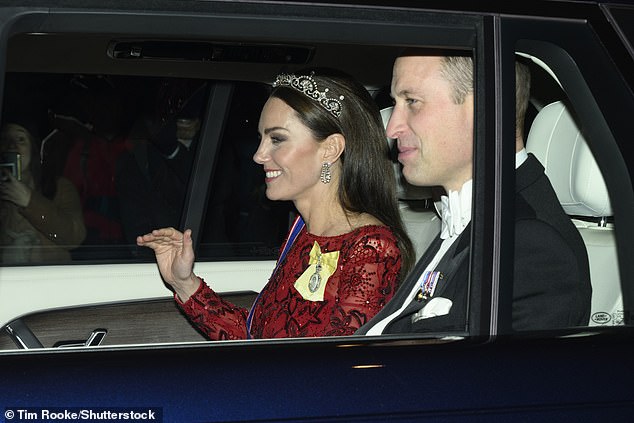 
Prince William reportedly said he will ‘never’ watch Harry and Meghan’s Netflix docuseries and told his friends to not ‘fuel the conflict’ by retaliating to any slants from the show.

The Prince of Wales is said to be more focused on ‘looking to the future’ and ‘getting on with the job’, rather than engaging in a ‘tit-for-tat’ battle with the Duke and Duchess of Sussex.

Despite the friction between the two couples, they will still be sending Christmas presents to each other’s children – but there will be no gift exchange between the adults.

A friend of Prince William told the Sunday Times: ‘He says he will never watch it and I know he definitely won’t.’ Another source confirmed the statement as: ‘Correct.’

The King and Queen will not watch the six-part series either, according to another friend said, but the royal family are said to be keeping track of the headlines.

Harry had hoped that his brother and his father King Charles would watch the docuseries to get a better idea of what he and Meghan have had to go through.

Prince William said he will ‘never’ watch Harry and Meghan’s Netflix docuseries because he’s ‘looking to the future’ and intent on ‘getting on with the job’, sources claim

While the Royal Family have not commented on the Netflix series, royal insiders said they have been particularly upset by the show’s criticism of the late Queen Elizabeth and her Commonwealth legacy, which was referred to as ‘Empire 2.0’

Meanwhile, royal sources have dismissed claims made by Meghan that she was wholly unprepared for royal life as ‘total lies’.

The Duchess of Sussex claimed in the series that she had no idea what a walk-about was, had to Google the national anthem and did not know how to curtsy – embarrassingly giving a demonstration of her first attempt, much to the obvious discomfort of her husband.

But a royal source told the Sunday Times that Meghan was in fact given a 30-point dossier about her future role by Harry’s then private secretary Ed Lane Fox six months before their wedding and was provided with a list of experts who could help her.

Another claim that has been cast into doubt is that Meghan was told she couldn’t invite her niece Ashleigh Hale, the daughter of her estranged half-sister Samantha Markle, to her wedding.

‘That just didn’t happen,’ a source told the paper. ‘We never gave any advice, steer or guidance on who of her family or friends should or shouldn’t come to her wedding.

‘I have a very clear memory of her [Meghan] saying that she had a niece who she would in other circumstances have liked to invite, but she didn’t want to invite her because it would have put her under intense scrutiny.’

The Duchess of Sussex claimed in the series that she had no idea what a walk-about was, had to Google the national anthem and did not know how to curtsy – embarrassingly giving a demonstration of her first attempt, much to the obvious discomfort of her husband

Rift: Harry and William during the unveiling of a statue of their mother, Princess Diana, at Kensington Palace last year

The part of the docu-series said to have upset Prince William the most, according to friends, was Harry’s suggestion that his brother married Kate because she ‘fits the mould’ rather than for love.

Harry said in the documentary: ‘I think for so many people in the family, especially obviously the men, there can be a temptation or an urge to marry someone who would fit the mould as opposed to somebody who you perhaps are destined to be with.

‘The difference between making decisions with your head, or your heart.

‘And my mum certainly made most of her decisions – if not all of them – from her heart. And I am my mother’s son’.

Prince Harry pictured with a group of male friends during his wedding reception in 2018. Despite their previous close relationship, Prince William does not feature

Meghan also recalled her awkward first meeting with William and Kate in episode two, while Harry again seems to snub his brother in the trailer for the second volume by failing to include the Prince and Princess of Wales in any of the plethora of wedding pictures that flashed up on the screen.

The couple have also received criticism over the series for attacking British institutions as they discussed their experiences – including racism- and almost half of Britons are arguing that the Duke and Duchess of Sussex should be stripped of their titles as a result.

A survey by the Mail on Sunday found that 44 per cent of people think that they should lose their titles, while only 19 per cent disagreed.