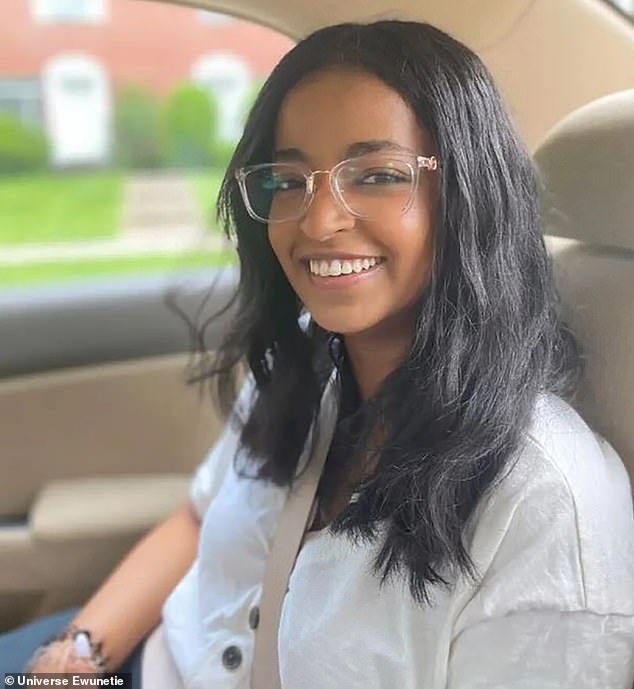 Princeton University students are afraid that a murderer is on campus following the mysterious disappearance and death of Misrach Ewunetie, and an unexplained incident with another student shortly before her death.

The promising 20-year-old student was found dead behind the college’s tennis courts six days after being reported missing on October 14. Months have gone by, but an autopsy has yet to be released, and no toxicology report is expected to come in until February due to pandemic-related backlogs.

Her family has expressed their frustration over the lack of details and condemned police for keeping them in ‘the dark.’

This has made students anxious and afraid despite a call from Princeton officials that the campus was safe and that no killer was on the loose.

Speaking on behalf of the Ethiopian and Eritrean Student Association, Faeven Mussie told the New York Times that it was premature for the school to make such claims when so little information has been released about the death.

The fact that Ewunetie’s body was found in a secluded location, that her phone last pinged at a city outside the campus and that a student saw her door removed from its hinges with a warning note attached the same day of the disappearance have left students chilled.

‘We don’t know what to think or what to believe or if we’re safe here,’ Mussie said.

Princeton University students remain frightened and on alert as few details have come out regarding the death of Misrach Ewunetie, 20, who was found dead on campus on October 20

Her body was found in the wooded area behind the university’s tennis courts. Police said there were no signs of foul play, but an autopsy or toxicology report have yet to be released

On the day of Ewunetie’s disappearance, sophomore Mikayla Merin said her door had been removed from its hinges by an unknown man with a sign that read: ‘Be Nicer.’ The incident has fueled speculations that the campus is unsafe

Police have found no evidence of foul play regarding Ewunetie’s death, but to quell immediate fears, officials noted that there were ‘no obvious signs of injury’ and that it did ‘not appear suspicious or criminal in nature.’

The university also sent out notices to students that there was no evidence that Ewunetie’s death was a murder.

In that notice, however, the school said it was tightening up security on campus, as well as enhancing lighting at night and security-camera programs.

‘While we know that our campus is safe, it’s important that you also feel safe,’ officials wrote to students.

The message sent mixed signals to students confused as to why security would need to be raised if the campus is reportedly safe.

Sophomore Isadora Knutsen told the TImes: ‘There’s no reason for anyone to believe it wasn’t suspicious.’

And as they received sparse information from police, many have clung onto theories and odd occurrences surrounding the death.

One of the most pervasive facts worrying students stems from an incident that occurred on the same day Ewunetie went missing.

According to an alert from Princeton: ‘On Friday, October 14, 2022, the Department of Public Safety responded to Kwanza Jones Hall to Investigate a report that an unknown individual had removed a student’s door from its hinges.

‘The subject was described as a male wearing a neon-yellow shirt, and blue jeans.’

The room belonged to sophomore Mikayla Merin, who found the door off its hinges with a note that read: ‘Be Nicer.’

Merin told the Times the incident left her unsettled, and she took a month off school and returned after installing her own security camera in the room.

Her family reported her missing after not being able to get in contact with the sociology student and said the cops kept them in the dark throughout the search. ‘There’s no constant update or interaction with us,’ said brother Universe, pictured here with Ewunetie. ‘We’re really kept in the dark’

Ewunetie, of Euclid, Ohio, was last seen on October 14 at around 3am near Princeton University’s Scully Hall, the residential building where she lived.

Universe said Misrach had been volunteering at Princeton’s Terrace Club, one of the school’s 11 private eating clubs, on October 13.

Terrace Club is one of the non-private clubs at Princeton, requiring members to only sign up for membership, and is not associated with the university. The clubs are for upperclassmen at the school to eat lunches and participate in various activities.

Other clubs require prospective members to apply for membership.

She was a member on ‘duty’ — performing housekeeping tasks during a live music performance at the club.

That night, the club was hosting Raavi with Jackie Marchal, according to its Instagram page.

After the club had closed and all of the responsibilities had been fulfilled, Misrach, together with other members on duty, left for the night.

Following the event ‘she went back to her dorm at 3am’ her brother said. ‘Her roommates said they saw her at 3am. Then another roommate of hers said she didn’t see her after 4am, and then after that no one had seen her.

Ewunetie’s disappearance triggered a multi-day hunt for her whereabouts that resulted in drones, helicopters and watercraft vehicles being deployed around the Ivy League university.

Campus police had visited Ewunetie’s housing estate three times and conducted a search with dogs, but were unable to enter any properties due to a lack of search warrants.

It was previously revealed that her cell phone last pinged early Sunday morning from a location seven miles from the campus.

The ping was located at a New Jersey housing complex near Penns Neck.

No further details on that ping have been shared since the discovery of Ewunetie’s body.